Even by Pentagon terms, this was a dud: The disastrous saga of the F-35 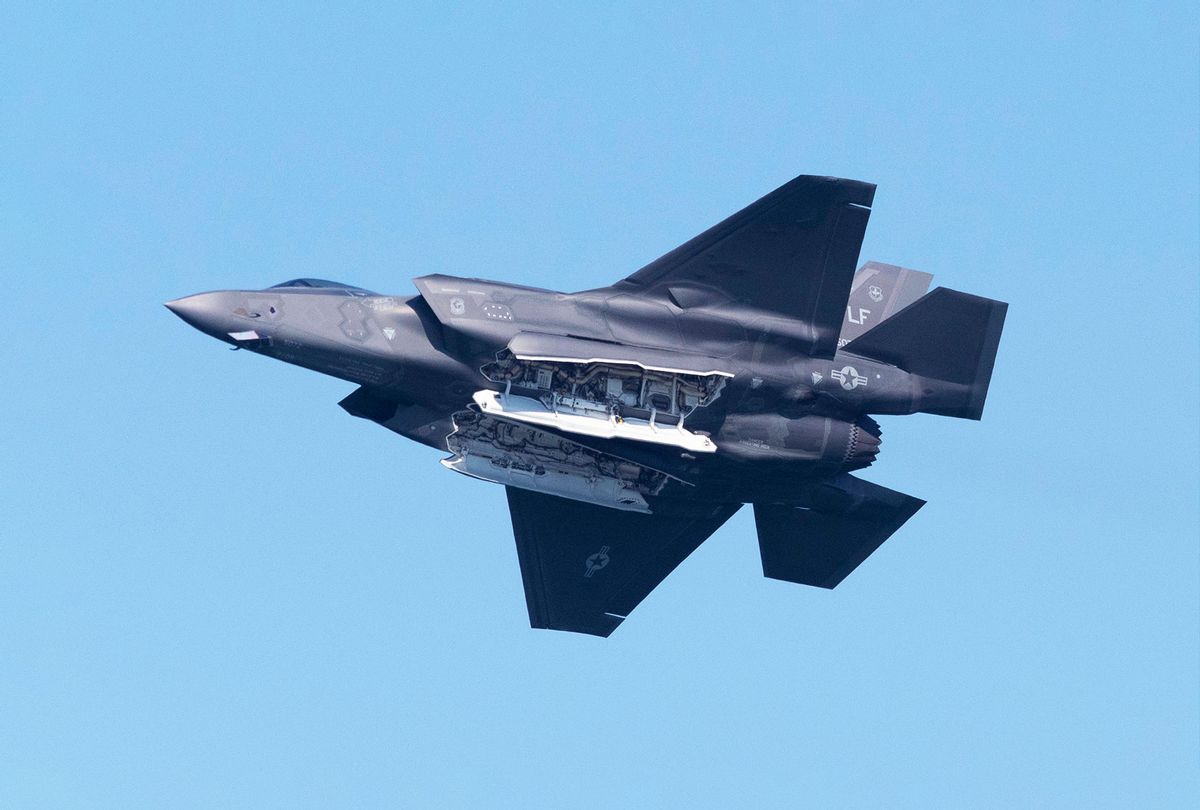 Somehow the United States has managed to develop a fighter jet for all three services — the Air Force, Navy and Marines — that goes for $100 million apiece, ran up almost a half-trillion dollars in total development costs, will cost almost $2 trillion over the life of the plane, and yet it  can't be flown safely.

How did this happen, you ask? Well, it's a long, complicated story, but basically it involves taking something that's supposed to do one thing and do it well, like take off from the ground and fly really fast, and adding stuff like being able to take off and land on an aircraft carrier or hover like a hummingbird.

That's why they call it the "flying Swiss Army knife." Have you ever tried to use one of the things? First of all, you can't find the knife blade, hidden as it is among scissors and screwdrivers and can openers and nose hair tweezers and nail files and pliers. The geniuses at the Pentagon decided they needed to replace the aging F-16 fighter, and everybody wanted in on it.

The F-16 is what you would call the M1A1 airplane of U.S. forces. The Air Force currently has about 1,450 of the planes, with 700 of those in the active duty Air Force, about 700 in the Air National Guard, and 50 in the Reserves. General Dynamics has built about 4,600 of them since the plane became operational in the mid-1970s, and they are used by allied air forces all over the world. You fill them up with jet fuel, push the starter button and take off. It will fly at twice the speed of sound, it will carry 15 different bombs, including two nuclear weapons, it can shoot down enemy aircraft with five different varieties of air-to-air missiles, it can knock out ground targets with four different air-to-ground missiles, and it can carry two kinds of anti-ship missiles. The thing is an all-around killing machine.

The F-35, on the other hand, can't fly at twice the speed of sound. In fact, it comes with what amounts to a warning label on its control panel marking supersonic flight as "for emergency use only." So it's OK to fly the thing like a 737, but if you want to go really fast, you have to ask permission, which promises to work really, really well in a dogfight. What are pilots going to do if they're being pursued by a supersonic enemy jet?

The F-35 will carry four different air-to-air missiles, six air-to-ground missiles and one anti-ship missile, but the problem is, all of them have to be fired from the air, and right now, the F-35 isn't yet "operational," which means, essentially, that it's so unsafe to fly the damn things, they spend most of their time parked.

Take the problem they have with switches. The developers of the F-35 decided to go with touchscreen switches rather than the physical ones used in other fighters, like toggles or rocker switches. That would be nice if they worked, but pilots report that the touchscreen switches don't function 20 percent of the time. So you're flying along, and you want to drop your landing gear to land, but your touchscreen decides "not this time, pal" and refuses to work. How would you like to be driving your car and have your brakes decide not to work 20 percent of the time, like, say, when you're approaching a red light at a major intersection?

But it gets worse. The heat coating on the engine's rotor blades is failing at a rate that leaves 5 to 6 percent of the F-35 fleet parked on the tarmac at any given time, awaiting not just engine repairs, but total replacement. Then there's the canopy. You know what a canopy is, don't you? It's the clear bubble pilots look through so they can see to take off and land, not to mention see other aircraft, such as enemy aircraft. Well, it seems F-35 canopies have decided to "delaminate" at inappropriate times, making flying the things dangerous if not impossible. So many of them have failed that the Pentagon has had to fund an entirely new canopy manufacturer to make replacements.

There's also the problem with the plane's "stealth" capability, which is compromised if you fly the thing too fast, because the coating that makes the plane invisible to radar has a bad habit of peeling off, making the planes completely visible to enemy radar.

But fear not, Air Force Chief of Staff Gen. Charles Q. Brown Jr. has come up with a solution. He announced last week that henceforth, the Pentagon is going to treat the F-35 as the "Ferrari" of the U.S. combat air fleet. "You don't drive your Ferrari to work every day, you only drive it on Sundays. This is our 'high end' fighter, we want to make sure we don't use it all for the low-end fight," he said in a press conference on Feb. 17.

Got it. If an enemy decides to start a war on a Tuesday or Wednesday, we'll just "drive" our aging F-16's, so our precious F-35s can be left in the garage waiting for good weather on Sunday. I'm sure we can get everyone to sign up for the "we'll only go to war on Sunday" treaty.

The F-35 can be understood best as a na-na-na-na-na problem. Originally developed for the Air Force, the minute the thing was on the drafting table, the Navy and Marines started crying, "Hey, what about us?" To quiet the jealous fit being thrown by the other services, the Pentagon agreed to turn the thing into the "Swiss Army knife" it has become.

A variant capable of taking off from and landing on carriers was promised to the Navy, with bigger wings and a tail hook. Except the tail hook refused to work for the first two years it was tested, meaning that every carrier landing had to take place in sight of land so the Navy F-35 could fly over to the coast and land safely on a runway.

The Marine variety had to be capable of vertical takeoff and landing, because the Navy was jealous of its carriers and would only agree to allow the Marines to have mini-carriers with landing surfaces big enough for vertical use. That meant the Marine version had to be redesigned so it had a big flap under the engine to divert thrust so the thing could land on Marine ships. This meant the Marine version had added weight and space that would otherwise be used to carry weapons.

So you're a Marine, and you're flying along in your F-35 and an enemy comes along and starts shooting at you, and you shoot back and miss, but you don't have another missile, because where that missile should be is where your damn vertical landing flap is.

Maybe they should just issue F-35 pilots a bunch of flags to use when they take to the air, and then they'd be ready for anything. Tail starts coming off because you went supersonic for too long? Fly your NO FAIR flag. Cockpit delaminating? Grab your JUST A MINUTE I can't see you flag. Engine rotor blades burning up? That would be the OOOPS can't dogfight right now, I'm waiting on a replacement engine flag.

Not to worry, pilots, the Pentagon is on the problem and they have a solution. Brown says they're going back to the drawing board for a "fifth generation-minus" fighter jet, meaning they want to come up with something that looks like and flies like and has the combat capabilities of the good old F-16. Only problem is, if you use the F-35 project as a benchmark, it will be two decades before the "minus" jet is operational. Until then, guys, have fun watching your F-35's gather dust on the tarmac while you continue to fly your F-16's, which will be older than the average pilot's grandfather by the time the new plane is ready.