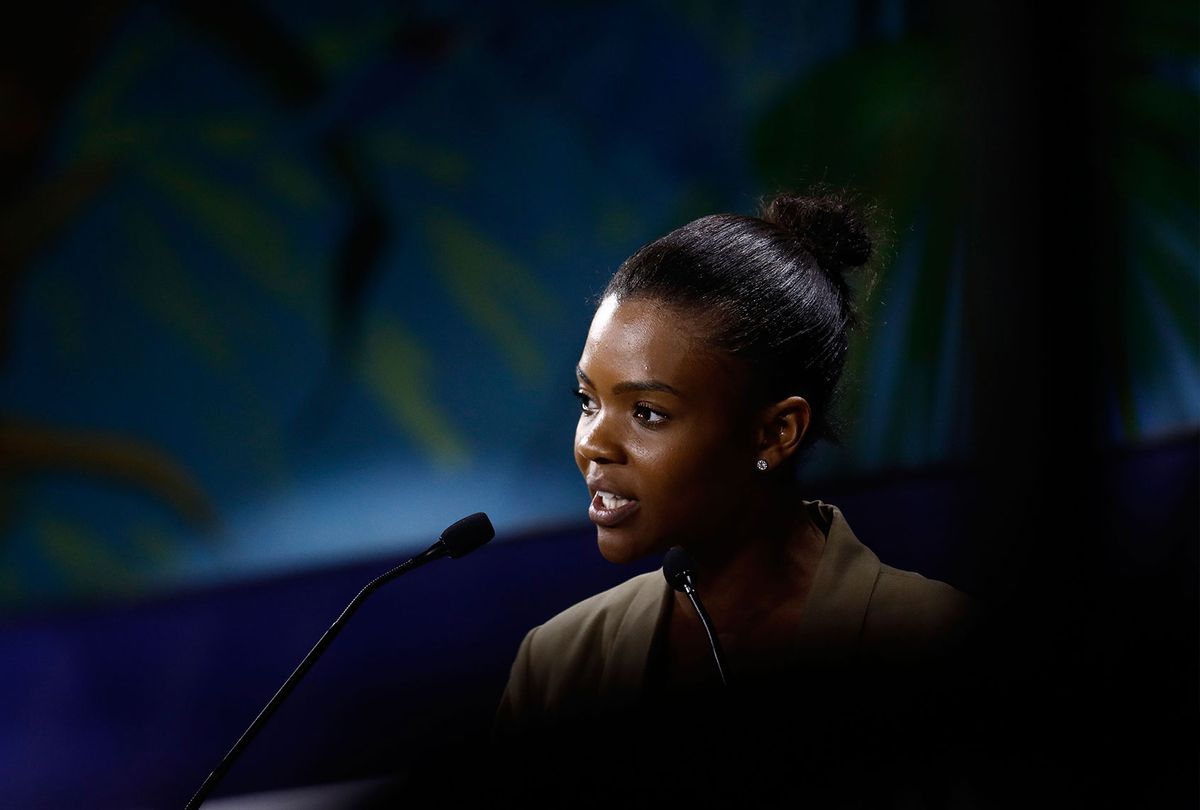 US activist Candace Owens delivers a speech during the "Convention de la Droite" in Paris on September 28, 2019. (SAMEER AL-DOUMY/AFP via Getty Images)
--

On Sunday, self-styled political commentator and right-wing provocateur Candace Owens went on a transphobic Twitter tirade, concluding, by way of impressive mental gymnastics, that Donald Trump is, in fact, a feminist hero.

"If you guys are wondering what actual feminism is," Owens said in her first tweet, "it's Donald Trump having the courage to stand up on stage and call out the insanity of biological men dominating women's sports."

Owens' tweet comes after Trump spoke on Sunday at the Conservative Political Action Conference in Orlando, Florida, an event which touted a six-foot-tall gold statue of the former President, as well as stage which quite literally resembled the shape of a known Nazi rune.

During his speech, Trump maligned President Joe Biden for allowing kids to participate in sports that correspond with their gender identities. Trump erroneously alleged that transgender women are waging some kind of war on sports because of the advantages held by those he deemed "biological males."

Still riding on a high from Trump's speech, Owens, an opportunist at heart, posted another tweet because her first had quickly gone viral.

"I'm trending right now and would like to publicly offer a non-apology for having stated the obvious," she wrote. "People purporting to be feminists that have not spoken out against the trans agenda currently eating women's rights—are frauds. Biological men have no place in women's sports."

Owens concluded with a final statement on Monday, formally christening Trump with a title that essentially flies in the face of his entire life. "Donald Trump," she said, "is more of a feminist icon than any woman breathing who works to legitimatize the diabolical effort from the LGBT community to erase what it means to be a woman."

Although there is vigorous right-wing hysteria surrounding how trans kids might be accounted for in athletic sports, there is no evidence that "biological men" are "dominating women's sports." As Chase Strangio, a lawyer for the ACLU, tweeted in response to Owens' claim, "At almost every level of government over the past few weeks we have heard about the 'threat' of trans kids in sports. Let's talk about this because there is no threat and yet, we are about to see a massive expansion of privacy intrusions into and surveillance of kids' bodies."

Given Owens repeated attacks on feminism as a mere concept, her sudden urge to gatekeep the word's essence is confusing to say the least. But attempting to make sense of someone like Candace Owens, a grifter down to the core, is a fool's errand as she herself has no essence to begin with.