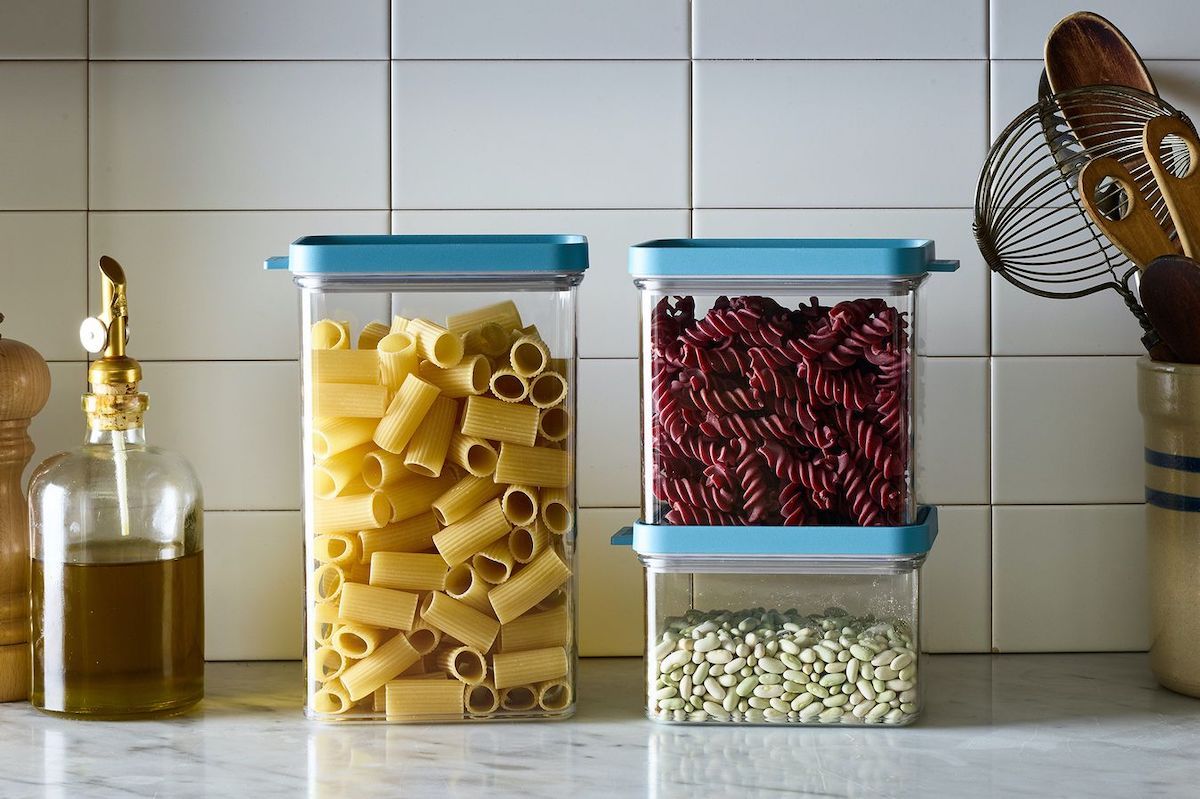 Welcome to Storage Wars, a new series about the best ways to store, well, everything. From how to keep produce orderly in the fridge (or not), to ways to get your oddball nooks and crannies shipshape; and, yes, how to organize all those unwieldy containers once and for all—  we've got you covered.

If we've gone grocery shopping together (or really, just spent any time together at all), chances are high you've heard me talk about how much I love the bulk bin. Nuts, grains, dry legumes, flours, pasta, dried fruit, snack mixes, granola: all so much more affordable than their packaged counterparts, and right there for the scooping up — please, stop me now. While early pandemic safety precautions paused some stores' bulk bin operations, most have returned to their former glory—though I've had to bid farewell to the feeling of sheer joy that was snacking on a few chocolate-covered almonds or pieces of dried mango from my bulk haul while continuing to shop.

Of course, the real adventure with the bulk bin — or any ingredients purchased in bulk — begins when you return home, bags and bags of goods in hand. While I suppose you could simply toss those paper or plastic bags from the store directly into the pantry, this is also a great way to tempt a host of pantry pests, and trust me, you do not want that in your life. When it comes to storing bulk food, just keep in mind a few simple rules: Store everything in airtight containers; first in, first out; larger quantities = the best bang for your buck; but don't buy in such bulk that you're overwhelmed.

Personally, these rules became my lifeline last spring, when grocery stores were overrun by panicked shoppers who bought up all the boxes of pasta and cans of beans; small bags of rice and 5-pound or smaller bags of flour swiftly became a distant memory, as I always seemed to plan my twice-monthly grocery run before most items were restocked. When the restaurant supply company Baldor began selling bulk items to individuals at such inviting wholesale prices (we're talking 25-pound bags of lentils for about a dollar a pound! 11-pound bags of farro for two bucks a pound! 50-pound bags of flour for just $30! But more on that last one in a bit), I just couldn't resist. Though bulk items are a dream for the wallet and for reducing supermarket trips, there reaches a point where a pantry runneth over. Here's how to store bulk food.

Store everything in airtight containers

Buy a fleet of identical airtight containers in a couple sizes (larger for flour, sugar, grains, and dry legumes; smaller for nuts and seeds or snack mixes). Options that are specifically designed to be stackable are great, but mason jars work just as well, and often come in more size varieties. When you bring bulk ingredients into the kitchen, immediately put each item in its respective container.

First in, first out

Though most dry goods last a while, the best rule of thumb is, as with produce or meat or leftovers, to use whichever items you bought first entirely before bringing in a fresh batch. It's of course never a bad idea to pick up an extra pound of something you eat several times a week (for me, that's rice, oats, lentils, and some kind of nut) on a whim; but for specialty items, say chickpea flour, it's always best to use at least most of what you have before restocking.

Larger quantities = the best bang for your buck

Because they're not packaged and are bought by the store in larger quantities, bulk groceries are typically significantly less expensive than their boxed counterparts at the supermarket. Especially when it comes to items you eat regularly, the best way to buy (and store) bulk goods is in large quantities. I store most of these containers in my kitchen pantry, and when I hit overflow in that large-for-Manhattan-but-small-for-many-other-places panty, some go on top of the fridge, some go on top of my kitchen cabinets, and the rest are in a large lidded plastic tote that also lives in my kitchen.

But don't buy in *such* bulk that you're overwhelmed

. . . says me, a person who purchased a 50-pound bag of bread flour last April. I did split it with my family, who I was living with at the time, and two local friends (we did masked flour exchanges), but I'll be honest, we're still working through the thing. It's currently sitting in a lidded plastic tote in my parents' basement. Another friend who also purchased one of these absolute units of flour ingeniously stored hers in a (new and unused) trash can on wheels. Almost a year later, we've gone through probably about 30 to 40 pounds of it. In hindsight, I'd day we overdid it on this one. So please, do as I say (don't overbuy bulk), not as I do, and keep your bulk storage in tip-top shape.