Titanosaurs, tremendously huge Cretaceous dinosaurs, may have evolved very differently than we thought 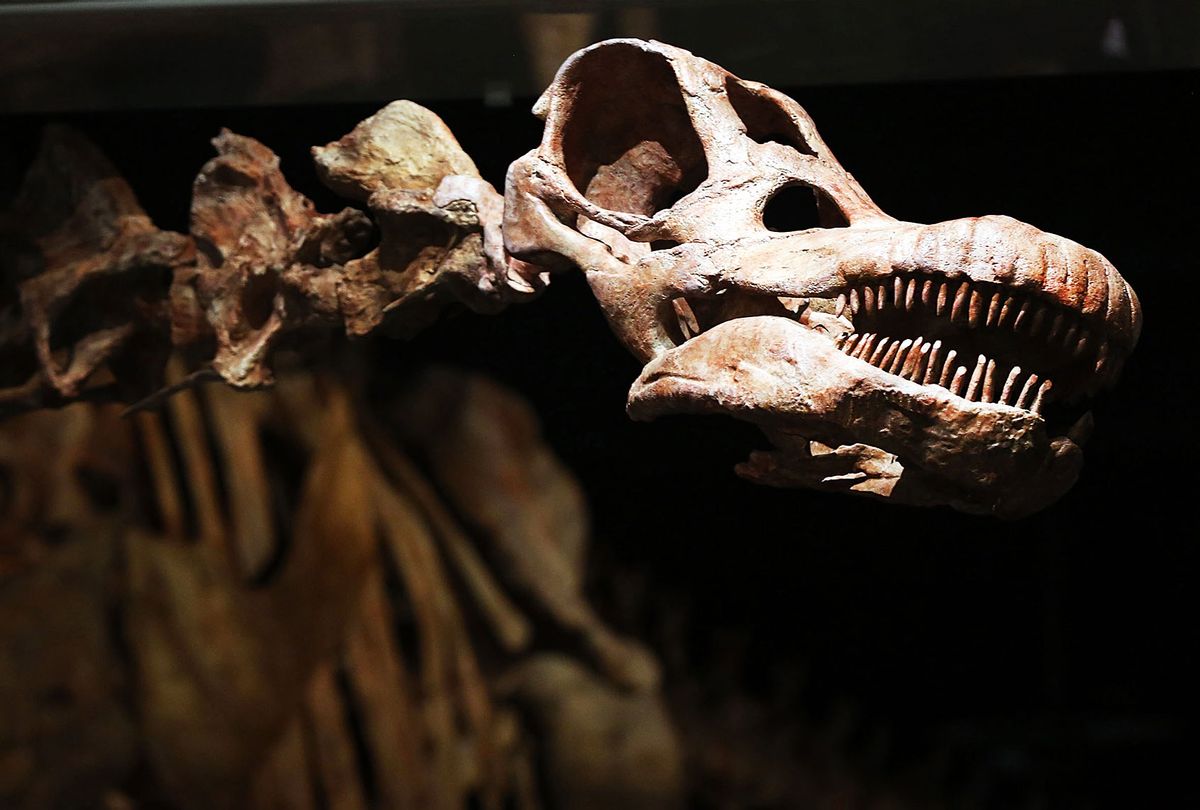 A replica of one of the largest dinosaurs ever discovered, the Titanosaur, is unveiled at the American Museum of Natural History on January 14, 2016 in New York City. (Spencer Platt/Getty Images)
--

You may be unfamiliar with the term "sauropod," but you're almost certainly familiar with the type of dinosaur: the large, long-necked, enormous animals have become a staple of pop culture, from children's toys to movies like "Jurassic Park." The ranks of sauropods include brontosaurus, brachiosaurus and apatosaurus, and possessed long tails and matching necks, trunk-like legs, and small heads compared to the rest of their bodies.

Within this broader class of massive dinosaurs there is a subgroup known as titanosaurs. They included dinosaurs like the Patagotitan, the Notocolossus, the Puertasaurus and the Argentinosaurus. And the lineage of titanosaurs just got a little longer: A newly-discovered species has become the oldest titanosaur known to have existed, according to a new study.

This newly-analyzed titanosaur has been dubbed ninjatitan zapatai, named after Sebastian Apesteguia, an Argentinian paleontologist nicknamed "The Ninja," as well as technician Rogelio Zapata. It was discovered in 2014 by researchers in the southwestern Argentinian province of Neuquen and is believed to have roamed the area known as Patagonia roughly 140 million years ago.

Both the age of the dinosaur and the recovery of the fossil are remarkable. It was previously believed that titanosaurs lived around the middle and end of the Cretaceous period — right up until the Cretaceous–Paleogene extinction event 66 million years ago, which is thought to have occurred after an asteroid struck the planet — but this discovery puts them closer to the beginning of the Cretaceous. And, as study co-author and Maimonides University paleontologist Dr. Pablo Ariel Gallina put it, fossils going back that far are "really very scarce."

"The main importance of Ninjatitan zapatai, beyond the fact that it is a new species of titanosaur, is that it is the earliest record worldwide for this group," Dr. Gallina said in a statement. "This discovery is also very important for the knowledge of the evolutionary history of sauropods, because the fossil records of the Early Cretaceous epoch, in around 140 million years ago, are really very scarce throughout the world."

The dinosaur is believed to have been roughly 65 feet long, based on the remains that were discovered. The findings were classified as postcranial, meaning that the scientists discovered parts of the skeleton other than the skull. Like other sauropods, titanosaurs like ninjatitan zapatai are believed to have eaten plants and may have been among the largest animals to ever walk the face of the Earth.

This is not the first major titanosaur news to emerge since the start of 2021. In January paleontologists in Argentina discovered bones that they believed may have belonged to the largest titanosaur of all time. They based this conclusion on the size and proportions of its pelvic bones and vertebrae, which suggested that it could have surpassed the Patagotitan as the largest dinosaur to ever live.

"This new specimen comes from a younger age than Patagotitan," Dr. Alejandro Otero, a paleontologist with Argentina's Museo de La Plata who was involved in researching the discovery, told Salon at the time. He added that "the specimen here reported strongly suggests the co-existence of the largest and middle-sized titanosaurs" along with smaller sauropods known as rebbachisaurids "at the beginning of the Late Cretaceous in Neuquén Province."