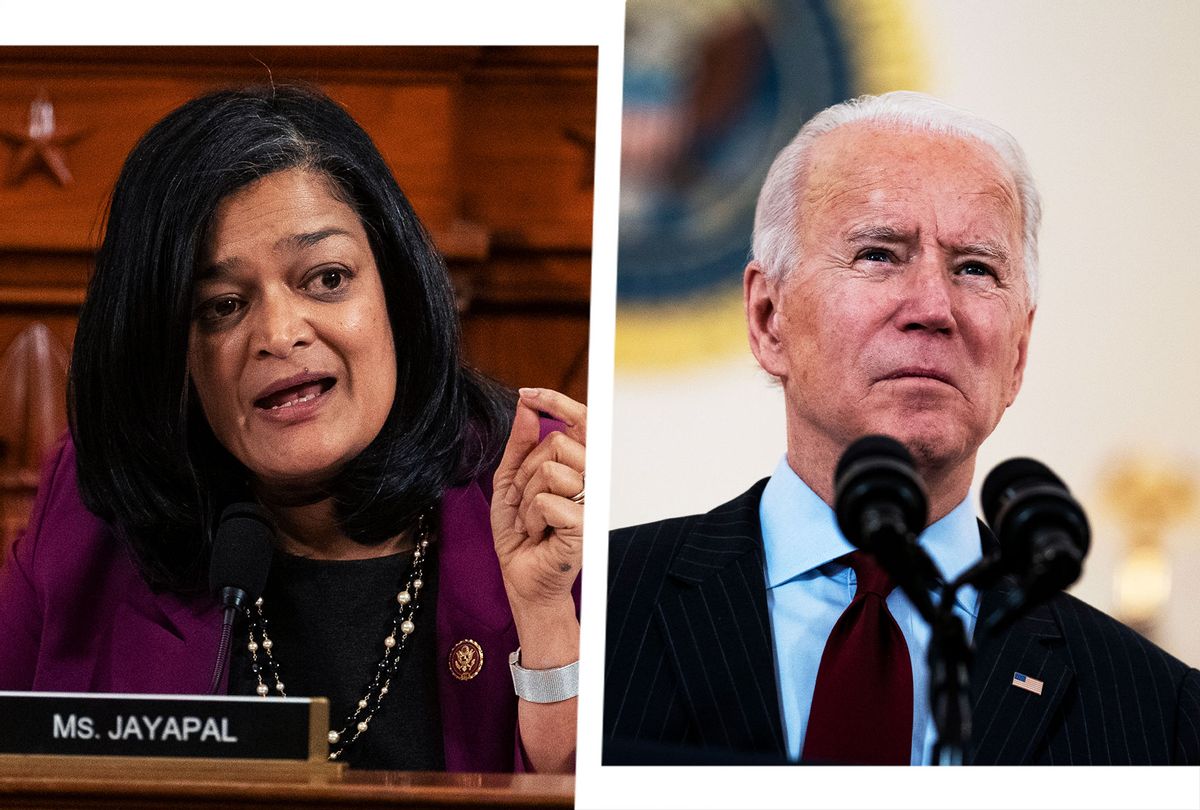 After House Democrats approved a far-reaching COVID-19 relief package early Saturday with all but two members of the caucus on board, progressive anger and despair escalated over the Biden administration's refusal thus far to make sure the $15 minimum wage increase remains in the bill as it heads to the U.S. Senate.

As journalist David Sirota, founder of the Daily Poster and former staffer for the 2020 Bernie Sanders presidential campaign, put it on Saturday: "If you were writing a Dickensian novel, it would be about millions of desperately poor people being promised a $15 starvation wage, and then watching their millionaire senators tell them that a parliamentary adviser in the palace said no."

While President Biden and his administration have made clear they will not move to use Vice President Kamala Harris' authority as presiding officer of the Senate to disregard or overrule the parliamentarian's determination, anger on the progressive left — both inside and outside Congress — has only grown since Thursday.

Winnie Wong, political strategist and another Sanders campaign alumnus, said the choices for Biden and Harris are now stark and suggested the stakes are much higher than many top Democrats appear to understand or acknowledge:

Addressing the issue Saturday morning on MSNBC, Rep. Pramila Jayapal, D-Wash., chair of the Congressional Progressive Caucus, said Democrats have no choice but to "muscle it through" the Senate given the campaign promises made to voters leading up to last year's elections.

"We can't go back to voters in two years," explained Jayapal, "and say, 'You know, we made you a promise — you delivered us the House, the White House, and the Senate — but a parliamentarian told us that we can't do it.'"

In a column on Saturday, The New Republic's Osita Nwanevu argued that Democrats have no one but themselves to blame for the failure to include the $15 minimum wage increase in the Senate's COVID-19 relief package. "Not Republicans. Not the Senate parliamentarian. Joe Manchin, Kyrsten Sinema, and even Joe Biden are to blame for squandering their party's majority power," he wrote.

It has been written and said that the gambit failed because the Senate parliamentarian ruled that including the minimum wage increase would violate reconciliation rules. This is false: The Senate parliamentarian is a wholly powerless functionary who can be overruled at any time by the party holding the White House and Congress — both of which, as you might recall, are now controlled by the Democratic Party. The gambit failed because the White House and many Democrats in Congress opposed overruling the parliamentarian.

As Common Dreams reported Friday, a progressive coalition— including  One Fair Wage, Women's March, People's Action, Center for Popular Democracy, and dozens of others — have sent a letter to Biden and Harris and are circulating a petition demanding that the parliamentarian's guidance be disregarded so that the increase can be included in the Senate bill.

"As President of the Senate, Vice President Harris has the Constitutional power to disregard the recommendation of the Senate Parliamentarian and include this provision in the COVID relief legislation," the letter states.

Noting that the "vast bipartisan majority of Americans support" raising the wage, the groups tell Biden in their letter that he "simply must rise up for the communities who turned out in record numbers to elect him and support the Vice President in taking this action on behalf of his Administration."

While critics spent the weekend blasting the president and vice president for hiding behind the Senate rules, Nwanevu was among those who said an alternative path is clearly possible — if only Biden were willing to fight.

Following the passage of the COVID-19 package in the House on Saturday, Ben Jealous, president of People For the American Way, applauded the approval and said now it is time for the Senate to complete the job.

"It's clear why the Senate must pass this bill: families continue facing economic anxiety, unemployment claims are skyrocketing, and people are behind on rent and facing household hunger," said Jealous. "Every element of this package is critically important, and they must not be whittled down in the Senate. Therefore, we urge the administration and the Senate to do everything in their power to quickly pass the American Rescue Plan — including the $15 minimum wage increase — to ensure Americans get the help they need."

Rep. Ro Khanna, D-Calif., suggested there is no excuse for every single Democrat in the Senate not to get on board with the $15 wage that Biden vowed to pass throughout the election season last year.

"This issue of will there be the votes in the Senate on final package is pretty simple," Khanna said Saturday. "If progressives can compromise and rally around the EXACT package President Biden proposed, is it not reasonable to expect every elected Democrat to do that?" Khanna also appeared on CNN to discuss his position:

Late Saturday, Jayapal repeated her message that Senate passage must follow if Democrats want to fulfill the pledges they made to the American people. "First, we promised workers that we'd give them a long-overdue raise. Then, the House passed a $15 minimum wage," she tweeted. "Now, the Senate must do everything necessary to urgently deliver."