CPAC, conservatives and the culture war: Why Republicans will become more extreme in Trump's absence 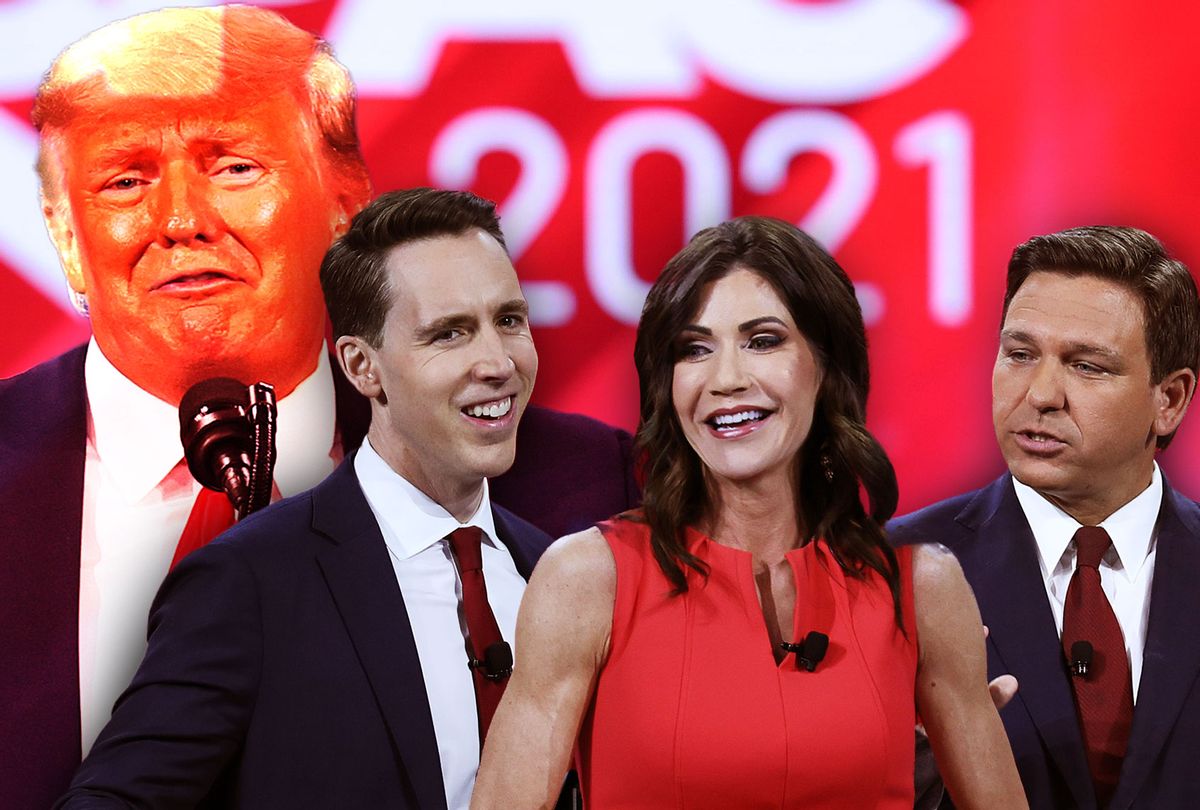 Back in 2017, the dominant post-election analysis held that the people who voted for Trump were driven into the arms of the billionaire, populist, demagogue out of an overwhelming sense of "economic anxiety." Political pundits spent months wringing their hands over how the Democrats had somehow failed to address the basic, workaday, kitchen-table-issues of these hardscrabble Americans while Donald Trump gave them hope that he would ease their burdens with his very stable business genius.

That was never very accurate as anyone observing the Trump phenomenon could see. Those voters were just mad at the fact that society is changing and they feel they are losing their status. In other words, they don't want to share the culture equally with people who think and live differently than they do. Donald Trump spoke their language of grievance and exclusion and they reveled in it. They followed him around like a bunch of red-hatted Deadheads, dancing, chanting and cheering ecstatically at every insulting, degrading remark he made, unashamedly telling the press that they loved him because he said out loud what they were thinking.

Despite losing his re-election, being impeached twice, overseeing the worst pandemic response of all developed countries and inciting an insurrection based upon the colossal lie that the election was stolen, most of them are still with Trump. If anything, they have gone way beyond simple grievance about losing their status as this series of interviews by CNN's Donie O'Sullivan at last weekend's CPAC illustrates:

You might think it makes sense to chalk up all those comments to the fringiest of the fringe but that would be wrong.

Political scientists Christopher Sebastian Parker and Rachel M. Blum at the Washington Post's Monkey Cage recently surveyed avowed MAGA followers and the findings were predictable. "At least half are White, Christian, male, over 65, retired and earn over 50,000 a year." It turns out 30% have college degrees so the idea that it's all about "non-college-educated" voters is at least somewhat erroneous. According to the Post:

MAGA supporters overwhelmingly believe Trump's election misinformation, as well as other conspiracy theories. Nearly 100 percent of MAGA supporters believe Trump's claims that the election was stolen, and 70 percent support Trump remaining in office beyond the allowed two terms. Their distrust extends to other areas as well. They overwhelmingly agree, in proportions of 80 percent or higher, with statements suggesting that unknown elites control America and with conspiracy theories about covid-19. [...]

MAGA supporters are also biased against Blacks, immigrants and women. They fully accept Trump's rhetoric on these groups, downplay any obstacles faced by Black Americans, view immigration as a threat to U.S. laws and culture and agree women are seeking special favors, or worse, are trying to control men.

This is a very radical group of people and they are much more extreme than they were in 2016. These are self-described MAGA believers so perhaps they don't accurately represent all Republican voters, but the fact is that most Republicans do support Donald Trump and it's hard to separate him from this wild set of beliefs. Certainly, the rejection of all reason and facts concerning the election results and democratic norms applies across the board.

New York Magazine's Ben Jacobs smartly observed that the American right has pretty much abandoned any pretense to libertarianism and is now much more aligned with the European right than its ever been. (Yes, their paeans to "freedom" are as shrill as ever but, as Jacobs points out, the point seems to be more aimed at "owning the libs" than any adherence to principle.) He notes that while there were some tepid gestures toward small government economics, the over-arching theme at CPAC this year was demagogic, culture war red meat, with "strident warnings about Marxism and Black Lives Matter, hardline stances set out on immigration and the rise of China and newfound zeal to combat and regulate social-media companies." And Jacobs notes that politicians all tried to tap into the "'but he fights' ethos that fueled Trump's rise."

The New York Times also reported that the crowd loved those they perceived as "fighters" from Senator Josh Hawley, R-Mo, to South Dakota Governor Kristi Noem and Florida Governor Ron DeSantis. (They even like the lame demagoguery of former Secretary of State Mike Pompeo, which I find incomprehensible.) They don't care if these people are right or wrong, it's their unwillingness to back down no matter what that they admire.

"We can sit around and have academic debates about conservative policy," DeSantis said. "But the question is, when the klieg lights get hot, when the left comes after you: Will you stay strong, or will you fold?"

That's also what they love about Trump. Considering that, perhaps the most disturbing parallel with European far-right nationalism and today's GOP is the Big Lie of the stolen election and the rejection of the peaceful transfer of power.

As the New Yorker's Masha Gessen points out, this widespread belief, validated and confirmed by all those "fighters" in the GOP and the right-wing media, has a disturbing precedent in recent political history. She tells the story of right-wing populist leaders Viktor Orbán, Prime Minister of Hungary, and Poland's Jarosław Kaczyński, both of whom were voted out of office after early failed terms, claimed that the vote was rigged and returned to office later to dismantle what was left of liberal democracy. They are still in office years later.

Gessen also quotes Bálint Magyar, the author of such books as "Post-Communist Mafia State" and "The Anatomy of Post-Communist Regimes" who defines their populism as, "an ideological instrument for the political program of morally unconstrained collective egoism." Gessen explains:

Magyar suggested reading the definition backward to better understand it: "The egoistic voter who wants to disregard other people and help solely himself can express this in a collective more easily than alone." The collective form helps frame the selfishness in loftier terms, deploying "homeland," "America first," or ideas about keeping people safe from alien criminals. In the end, Magyar writes, such populism "delegitimizes moral constraints and legitimizes moral nihilism."

Now go back and look at the characteristics of the MAGA people surveyed by Parker and Blum for the Monkey Cage. Magyar describes their leadership as well.

At their CPAC confab last weekend, South Dakota Gov. Kristi Noem proudly took credit for refusing to follow health guidelines that would have saved lives in the pandemic. Texas Sen. Ted Cruz mocked the necessity to wear masks. And their president in exile stood before them and insisted over and over again that the election was stolen from them. That sure sounds like "a political program of morally unconstrained egoism" to me.