Donald Trump's "real" legacy to America: The weaponization of an alternate reality

Ted Cruz, Ron Johnson and the entire GOP have learned a dark lesson from their former master: Simply deny the truth 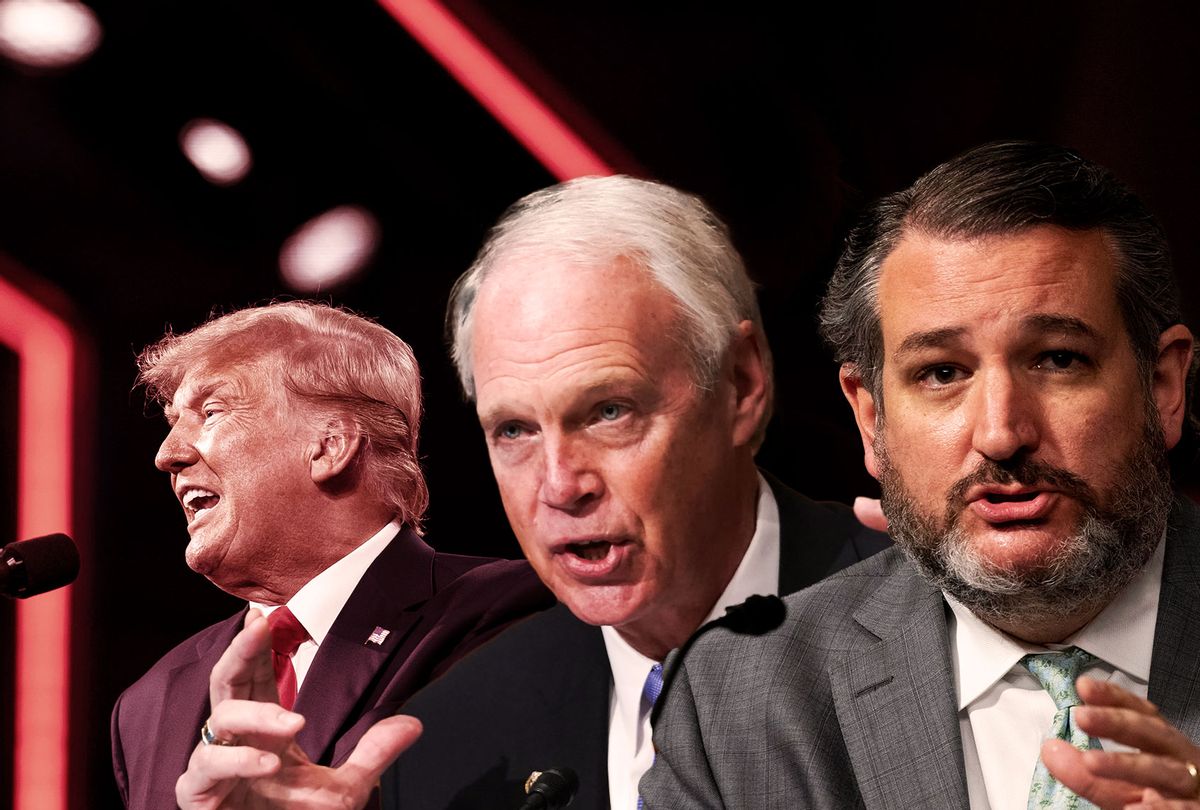 Sen. Ted Cruz is a proud disciple of Donald Trump's legacy to America — his weaponization of alternate reality. In recent days, Cruz has been positively Trumpian in his betrayal and lack of empathy regarding his family's getaway to a beach resort in Mexico while his state was paralyzed by a catastrophic winter storm. To make matters worse, Cruz championed an alternate reality by concocting different versions of the "truth" with a web of lies and shifting blame to his children. For now, his alternate reality appears to have won the day.

Sen. Ron Johnson claims that the mood among the demonstrators at the Capitol on Jan. 6 was largely "positive," and that there were "fake Trump protesters" in the crowd. In proclaiming this blatant falsehood, Johnson is egging on the millions of Trump supporters who still believe that the election was stolen from their leader. Alternate reality lives on.

At the conclusion of Trump's second impeachment trial, he was acquitted for his role in the insurrection at the Capitol. Despite being presented with mountains of audio and video evidence from that fateful day, 43 out of 50 Republican senators voted to exonerate him. It was not just cowardice or foolishness that led to their votes. No, they made a purposeful decision to follow their cult leader into the abyss of his alternate reality. According to Trump, his speech that morning to the escalating mob was "totally appropriate." Alternate reality triumphed over observable truth on center stage.

Trump has created his alternate reality to bolster his fragile ego and to advance his political fortunes. He has used it to cover up his evident character defects and to persuade others to believe in his greatness and superiority. His "reality" consists of "big lies," small lies, conspiracy theories, misinformation, propaganda, false narratives and violence. He is masterful — although deeply corrupt — at blurring and even shattering truth for his political advantage. In Trump's fantasyland, there is no oversight, no accountability and no laws that apply to him. The means justify the ends. Anything he says or does is acceptable as long as it brings him attention, adoration, profit and power.

Unfortunately for our country, Trump's use of alternate reality has become the ideology of the Republican Party and nearly half of all Americans. This explains why most of the party and legions of followers still support a man who has been impeached twice, botched the deadly coronavirus pandemic, crashed the economy and incited an insurrection against our government. This is what happens when a demagogue promulgates a "reality" that carries the weight of the presidency but is inherently toxic and pernicious.

Trump's alternate reality is wholly malignant and dangerous because it undermines objective truth. It is a myth. It is an illusion. Trump is a salesman, a carnival barker, a con man. He has no interest in people, policy or public service. All he cares about is selling himself — his personal and commercial brand — through his lies, his conspiracy theories and his propaganda. Anything is fair game, even an alternate reality that is nonsensical and poisonous.

Trump's use of alternate reality is antithetical to democratic principles and the Constitution. He does not love democracy and he does not love America. He wants to destroy it. He is an authoritarian at heart. He orchestrated and incited an insurrection against our government, intended to overthrow the will of the people. His singular goal was to maintain his power at any cost. If that had happened, his alternate reality would have lived on and flourished. We would have become a country of lies, conspiracy theories, propaganda and violence — also known as an authoritarian state.

President Joe Biden and Vice President Kamala Harris are the antidotes to Trump's alternate reality. They function within the context of facts, the truth and science. They have not constructed an alternate reality that is self-serving and virulent. They cherish democracy and understand that its sustainability requires observable and transparent truth.

The solution is for Trump to be marginalized and purged. Even now that he is out of office, he has hit the airwaves to continue to spread the "Big Lie" that he won the election. He will never accept or understand that his alternate reality is destructive to the well-being of our people. Nor does he care. He still thinks it is his sure-fire ticket to success. After all, he became president and came close to winning re-election by convincing Americans that his "exceptionalism" could be theirs too — and that their lives would be better for it. Please tell the families of the 500,000 dead Americans that their lives are better. Please tell the millions of Americans who are jobless, broke and frightened that their lives are improved.

Americans must stop being lazy and complacent about figuring out the observable truth. They cannot let partisan bias allow their thinking to be hijacked by an alternate reality. Cable news networks and social media platforms must make truth their sole vehicle of communication. Fox News, OAN, Newsmax, Facebook and other entities must take responsibility for promoting truth over fiction, facts over lies and critical observation over conspiracy theories.

Trump's weaponization of alternate reality must be repudiated once and for all. Ted Cruz, Ron Johnson and other congressional Republicans need to rebuke Trump's alternate reality — and must stop creating their own for purely selfish and political reasons.

There is only one truth — the objective truth. What Donald Trump and his cohorts do not want you to know is that truth is the one "real" ticket to success in a democracy based on freedom, rule of law and the will of the people. History shows that our country has never been divided by alternate reality versus the truth in such a stark and destructive way. It would be so much easier for us to govern ourselves if we could make objective truth our top, shared priority.

The use of alternate reality by Donald Trump, Ted Cruz, Ron Johnson, or anyone else — including millions of Americans — is unacceptable, anti-democratic and venomous to our way of life. Observable, verifiable and transparent truth is what our democracy is founded upon. Without that, all is lost.