How to cook a spiral ham (and enjoy it for days) 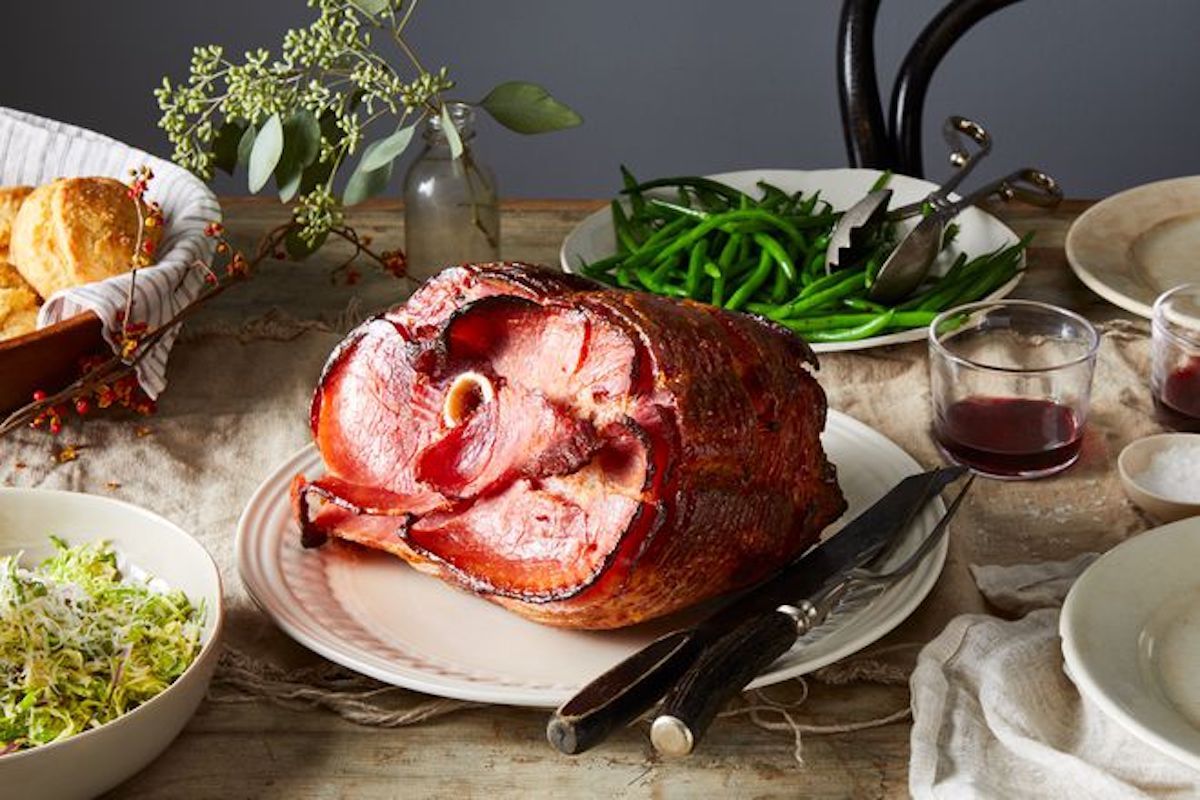 Spiral sliced ham is, in fact, an American invention. Harry Hoenselaar, the founder of the HoneyBaked Ham Company, built the world's first spiral slicing machine in 1924. The idea, he said, had come to him in a dream, and his prototype was assembled from "a tire jack, a pie tin, a washing machine motor, and a knife." If you're as enamored by the idea of this gorgeous meat helix as we are and wondering how to cook a spiral ham at home, you've come to the right place. Let's cut the fat, and get right down to the bone of how to treat your ham right, so you and your guests can properly feast on this succulent American classic.

What is a spiral ham?

A spiral ham is, in a nutshell, a bone-in ham that's been sliced with a special spiral-slicing machine, which carves the meat into perfectly thin slices while allowing it to retain its show-stopping centerpiece shape for optimal presentation. All spiral sliced hams are pre-cooked, so there is actually no need to cook a spiral ham — it's ready to eat. Nonetheless, there are two additional steps to take in order to get the most enjoyment out of your ham: heating and glazing.

How to heat a spiral ham

Your ham is already cooked, so it only needs to be brought to a suitable serving temperature, which is about 140°F. Since it's a large piece of meat, warming should go slow and low because it takes time for heat to penetrate all the way to the bone. You don't want to dry out the surface in the process, however, and heating too aggressively will rob the ham of its succulence (to the point where neither glaze nor mustard can improve the situation).

The most important tool to help you properly heat a spiral ham isn't an oven, it's a thermometer. Yes, you need an oven, too. But being able to measure your target is the best way to avoid overshooting it. You don't want to miss Juicytown and end up in Jerkyville.

Next you'll want some kind of covering. Foil is the easiest vapor barrier to apply, and it's foolproof. Loosely wrap the ham with foil, set it in a roasting pan, and you'll have everything you need to keep your ham nice and moist. If you don't have foil, you can use a cooking bag, or even a large oven-safe pot with a lid set ajar.

Some folks like to add liquid or lemon slices to the bottom of the pan, but this isn't necessary. As long as you use a thermometer and don't set your oven too high, your ham will reach serving temperature without drying out.

Many ham preparation guides will tell you to heat your ham for X minutes per pound at Y temperature. The X is usually somewhere between 10 and 20, while the Y is generally 250-300°F. Don't worry so much about the time, and just check the ham's internal temperature periodically with the thermometer. When it hits 135°F or so, pull it out, and it will continue cooking to reach the recommended 140°F. For a large ham, this can take several hours, so plan accordingly.

You can use a crockpot instead of an oven to heat your ham, provided, of course, the crockpot is spacious enough. In a crockpot set to low, an eight to 10-pound ham will warm through in four or five hours, depending on the ham's initial temperature.

How to glaze a spiral ham

Many spiral hams will come with a little packet of glaze. Everyone loves to advise you to throw the packet away, but we'll leave that decision up to you (to be certain, there's nothing especially wrong with the glaze packet). If you're making your own glaze, feel free to take the flavor profile in just about any direction, although traditionally most glazes are made with a combination of brown sugar, honey, mustard, fruit juice, and spices like clove or cayenne pepper. Maple and bourbon are also popular flavorings.

In terms of timing, it's best to apply several applications over the course of reheating. That way the glaze has time to drizzle in between the slices, and help seal in the moisture throughout the warming process. If you like, you can put the ham under the broiler for a couple of minutes at the end in order to get those crispy, caramelized edges with sizzle and shine announcing the presence of a formidable centerpiece. Crispy edges can also significantly boost leftover ham's value, adding a pleasant texture even days later.

How to carve a spiral ham

Now that your ham is hot, glazed, and ready to serve, you'd better photograph it, because next you'll need to carve it. Simply slice along the bone and watch those perfect slices fall like autumn leaves or the petals of spring flowers onto your platter or plate. Drizzle with a few glaze-infused pan drippings, and enjoy. Don't forget to save that ham bone, it's perfect for collard greens, pasta fagiole, or red beans and rice.