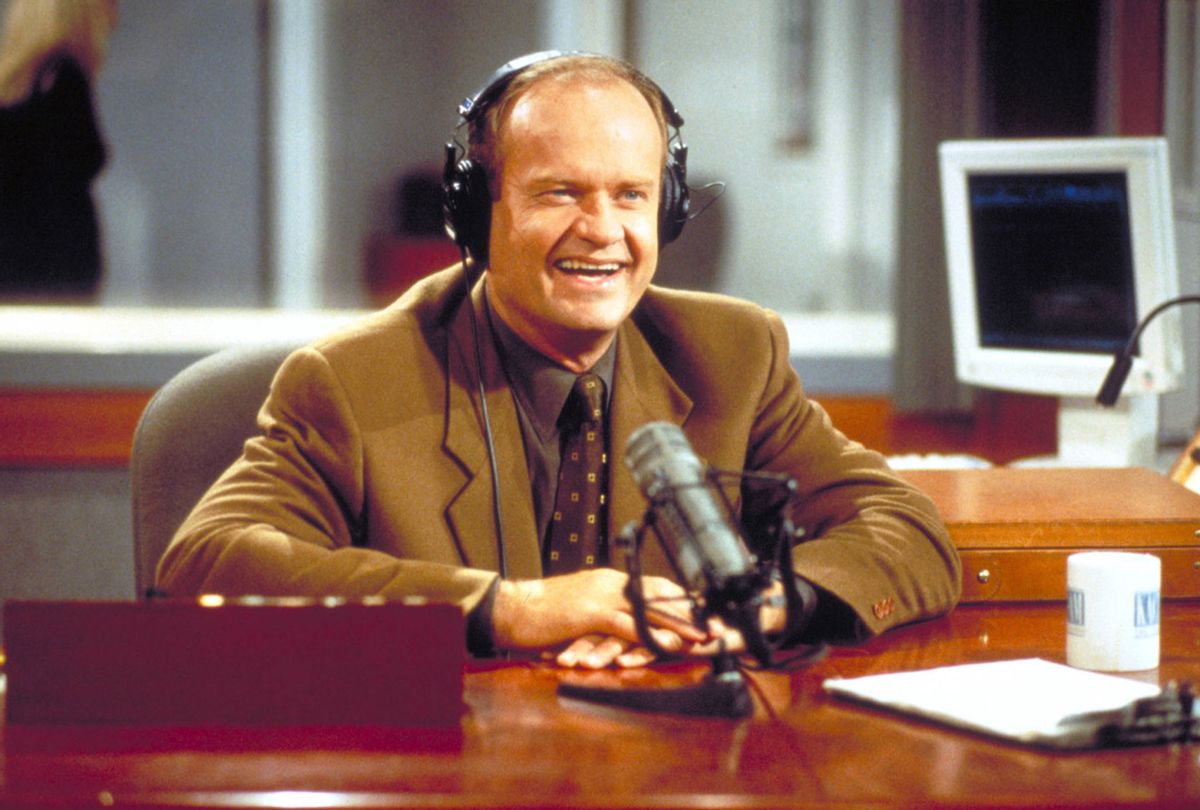 "The hit '90s sitcom "Frasier" is set to return to screens for a 12th season, with Kelsey Grammer reprising his role as radio psychiatrist Frasier Crane in the reboot, ViacomCBS confirmed…. But there was no word as to whether his supporting cast members will join him in the new series…." — CNN, 2/25

[NOTE: This document is not to leave the Paramount+ virtual lot!!!!!!!]

Episode 12.1 ("Howdy Podner!"): Dr. Frasier Crane is back in Seattle after living for 14 years at a WH Smith in O'Hare Airport while trying to book a return flight from Chicago with a declined NBC corporate card. He is now in the third year of his daily living-room based podcast, "Freud Not." After ten minutes lambasting his listeners for never phoning in for advice, only a returned call from the Apple Store reveals to Frasier that, technically, he cannot have a podcast if he does not have a webops platform. Or if his laptop has an operating system less recent than Windows XP. His 2005 lifetime FCC ban from radio following an on-air incident with Robin Quivers (guest star Issa Rae) is briefly mentioned but not discussed.

Episode 12.2 ("You Might Feel a Little Prick"): Now up and running on Patreon, Frasier suddenly cuts off a podcast episode with a survivor of Stockholm Syndrome (Hope Hicks) when he gets an alert on his phone that there's an open slot available for the latest, most exclusive Covid vaccine, the Moderna Lisa. When the urgent care nurse (Billy Eichner) asks for an emergency family member contact, Frasier hastily scribbles "Lillith S." and a profile link from JDate.

Episode 12.3 ("Driver's Oedipus"): His thirty-second birthday approaching, Frasier's now grown, multi-issued son Frederick (Sean Hayes in a receding blond wig even though he is only heard on the phone) lets his dad know that he is motoring into town for an Oath Keepers 3K Fun Run and makes the old man promise to hook him up with courtside seats for a Sonics game, even though it's August and the NBA team left Seattle 13 years ago. Wounded, and still bitter over losing his medical license after a psychiatric journal published his meant-to-be satirical essay, "Transference in Inflatable Patients," Frasier feels compelled to tell Frederick, "Remember, you're an only child. Just like me…."

Episode 12.4 ("La-Z-Goy"): After finally selling his late father's pea-green recliner on eBay for $112.47 (local pick-up only), Frasier has second thoughts while waiting for the buyer (Riz Ahmed) to show up. He fondly reminisces about a trip to Howard Johnson's when his dad was an active duty cop and momentarily confused the Heimlich maneuver with a sleeper hold on a distressed diner (flashback with Artie Lange playing both parts). When the buyer (Daveed Diggs, after a scheduling conflict with Ahmed) finally arrives, he notices the side lever of the chair is inoperable. Frasier repays him the $112.47, plus $60 to cart the recliner away, plus two bottles of Febreze.

Episode 12.5 ("All in the Fluidity"): Frasier's podcast is about to get its first revenue producing sponsor, the gender-neutral footwear company Matriarch. But Frasier blows the deal when he keeps insisting to the Matriarch marketing team (Alex Borstein, Dan Levy) that his pronoun should be who/whom. The sudden loss of a reliable income stream forces him to cancel his search for a new housekeeper, now down to six finalists (Busy Phillips, Amber Ruffin, Claire Foy, Justina Machado, Moses Ingram, William Zabka) who were to compete in a Wagner lip synch battle for the job.

Episode 12.6 ("Have a Tryst Kit"): His 90-day Tinder suspension suddenly lifted after only four days when the complainant (Amy Sedaris) blames the misunderstanding on a salt deficiency, Frasier renews his Quixotic search for companionship. Unfortunately, minutes into his triumphant return, he dislocates two fingers after swiping right too overzealously. When the urgent care nurse (Ohio Rep. Jim Jordan) asks for an emergency family contact, he writes down the number of the guy who carted off his dad's recliner. In the closing cliffhanger scene, Frasier is seen ringing an apartment buzzer with his free hand, a clutch of pansies and a bag of IV saline under his arm.

Episode 12.7 ("Star Bucks"): Frasier celebrates the ten-year anniversary of the closing of Café Nervosa by showing up with a thermos of Kona, a seat stick umbrella and a copy of "Alfred Adler: Sicko-phant" in front of the SmileDirect that now occupies the space. While the manager (Ken Jeong) calls the police, a well-dressed couple in their mid-forties (Vincent Kartheiser and Luke Kirby) approach. They recognize Frasier instantly and ask him to help get their daughter (a Fanning TBA) into Harvard. When the flattered celeb shrink asks what he can do, they hand him a bag with $250,000 in cash and make him open a Venmo account at gunpoint. Upon seeing the glint of the gun barrel, the assistant manager (Miles Brown) calls the police back and tells them not to bother.

Episode 12.8 ("Seemed Like a Good Idea at the Time…"): Shot documentary style, Paramount+ execs and showrunners stop by Kelsey Grammer's trailer with a magnum of non-alcoholic champagne and news that they've been able to sign original cast member Dan Butler (Dan Butler) to reprise his role as Frasier's unapologetic, misogynistic co-worker Bob "Bulldog" Briscoe. The last 20 minutes is a montage of a Tesla pulling away and a mostly union crew breaking the set down to a looped medley of "There Used to be a Ballpark"/"Crazy"/"It's Raining Men" (BMI license fees pending).