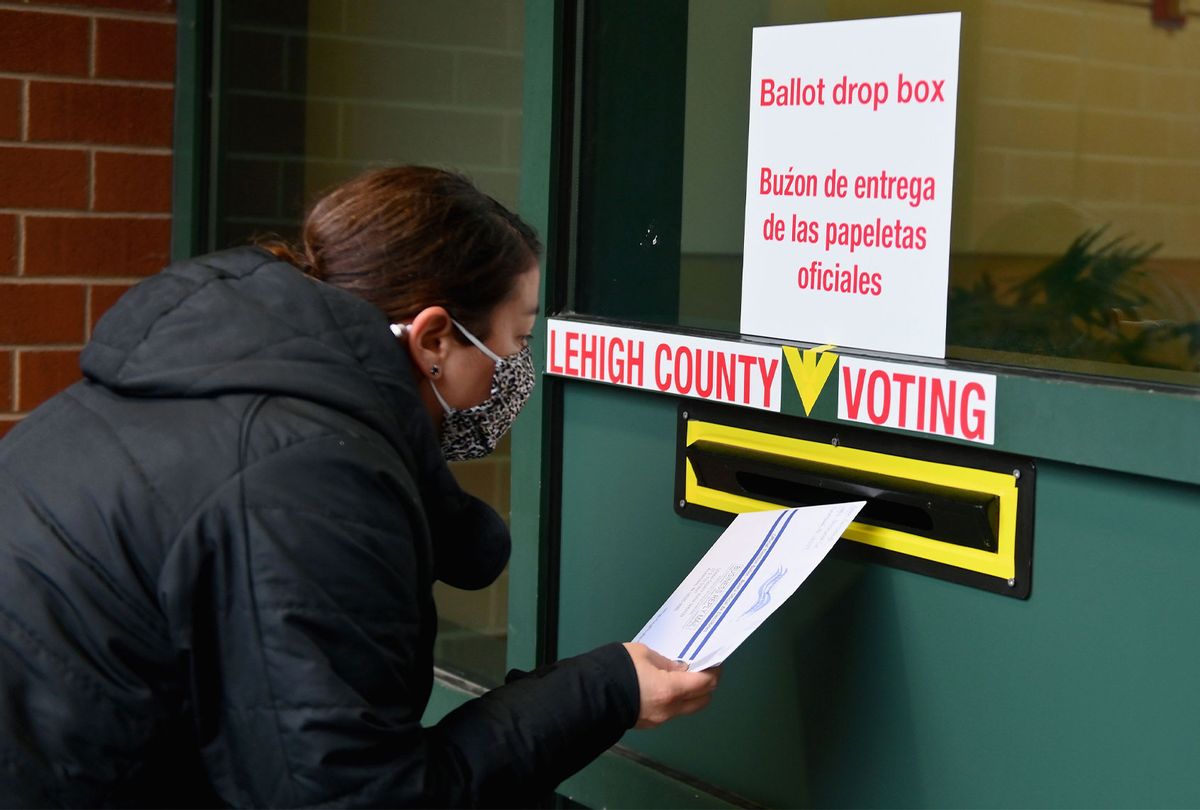 A voter arrives to drop off he ballot during early voting in Allentown, Pennsylvania on October 29, 2020. (ANGELA WEISS/AFP via Getty Images)
--

The calls and order coincided with the 56th anniversary of an event that become known as "Bloody Sunday" and is a seminal moment in the civil rights movement. On March 7, 1965, Alabama state troopers and police tear-gassed and brutally beat hundreds of nonviolent civil rights protesters who'd set off from Selma to Montgomery as they attempted to cross the Edmund Pettus Bridge. One of the march leaders was  Rep. John Lewis, who died last year.

In the executive order, Biden points to "significant obstacles" to the polls including "discriminatory policies" impacting Black voters, as well as "[l]imited access to language assistance" and the denial of "legally required accommodations" for people with disabilities.

"It is our duty to ensure that registering to vote and the act of voting be made simple and easy for all those eligible to do so," said Biden.

Sunday's order directs the heads of all federal agencies to submit proposals for their respective agencies to promote voter registration and participation within 200 days, while assisting states in voter registration under the National Voter Registration Act. In addition, the order instructs the General Services Administration to modernize the federal government's Vote.gov portal.

The president announced the order in his virtual remarks to the "Martin & Coretta Scott King Unity Breakfast." He referenced the 2013 gutting of the Voting Rights Act (VRA) and the "unprecedented insurrection in our Capitol and a brutal attack on our democracy on January," as well as the more than 250 bills in state legislatures — nearly all proposed and supported by Republicans — attacking voting rights.

Biden also referenced H.R. 1, the For the People Act, which the House passed last week. The sweeping legislation includes the establishment of a national automatic voter registration system, an expansion of early and absentee voting, and a ban on large voter-roll purges.

He called it "landmark piece of legislation" he hoped he would be able to sign into law.

Biden also called for passage of the John Lewis Voting Rights Advancement Act, H.R. 4, which, as the Brennan Center explains, would "combat racial discrimination in voting by restoring and strengthening the protections of the VRA."

"In a fitting tribute to the first Bloody Sunday anniversary when civil rights icon Congressman John Lewis is no longer with us, President Biden has taken important steps to ensure people can participate in the political process. We applaud this action to promote access to the ballot box and will continue to push for those in power to protect the right to vote," Henderson said in a statement.

"Government, at all levels, should tear down barriers to the ballot," he continued, "not build them as we are seeing in far too many places."

According to author and voting rights expert Ari Berman, it's a "1965 moment for Democrats."

"They can eliminate [the] filibuster to pass H.R. 1 and John Lewis Voting Rights Act to stop GOP voter suppression," he tweeted. "Or they can allow GOP to undermine democracy for [the] next decade."