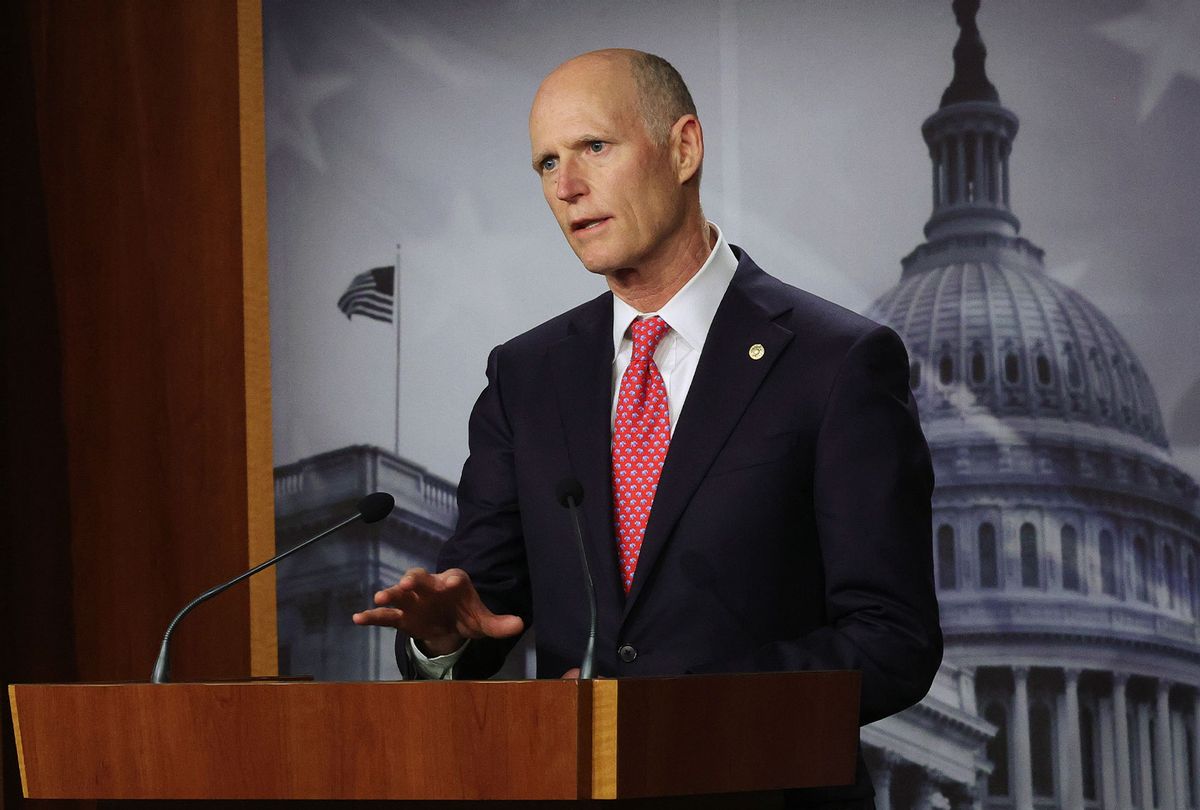 Following the passage of President Biden's $1.9 trillion Covid relief bill, one Republican congressman finds himself with little recourse but to impotently beg his fellow Republicans to return billions in relief aid to the federal government.

Sen. Rick Scott, R-Fla., who is set to meet with Donald Trump this week at Mar-a-Lago, is beseeching states and cities across America to refuse federal aid and put politics over policy. In a missive sent to governors and mayors just after the bill was approved on Wednesday, Scott tarred the piece of legislation as "massive, wasteful and non-targeted." He encouraged state and local leaders, by way of sending back the aid, to demand that Congress "quit recklessly spending other people's money."

"By rejecting and returning any unneeded funds, as well as funds unrelated to COVID-19," his letter read, "you would be taking responsible action to avoid wasting scarce tax dollars. After all, every dollar in this package is borrowed."

Scott wrote that refusing the money is "simple and common sense," given that "10% of this monstrosity" (i.e. the relief bill) is "wholly unrelated to responding to the pandemic." American taxpayers, he said, "should not be used as bonus cash to plug budget holes caused by decades of poor fiscal management. This is not a taxpayer-funded bailout; it is a reimbursement for specific, COVID-related expenses."

It's not the first time Scott has rebuffed federal aid. As the governor of Florida, Scott categorically rejected federal funds designed to expand Medicaid under Obamacare back in 2015.

By contrast, Florida's present governor, Ron DeSantis, has repeatedly argued that Florida is not getting a big enough piece of the pie on a per capita basis. DeSantis specifically took issue with the fact that relief funds under the American Rescue Act would be doled out according to unemployed rates as opposed to overall populations, a distinction which he alleged will direct money away from Florida because it has a stronger economy than many states.

"The reason is that we have better indicators in Florida than these other states," DeSantis said during a Monday presser. "So, that's not fair."

Biden's relief package is but the latest wedge between DeSantis and Scott, who have been engaged in a long-boiling feud on a variety of different issues. DeSantis has repeatedly blamed Scott for many of the dysfunctionalities of Florida's unemployment system during the pandemic –– a system that Scott was originally charged with developing and executing during his time as governor.

Last week, DeSantis last said that he would consider using some of the federal aid to replenish Florida's dwindling unemployment fund –– a move that might allow the governor to avoid raising taxes on businesses.

Although Scott rejected the bill on principle, he still denied its value on account of it providing disproportionately low relief to Florida in comparison to other states –– an objection which falls in line with DeSantis'. "This bill is bad for Florida," Scott wrote, "Not only does it commit Florida taxpayers to unnecessary and wasteful bailouts of poorly-run liberal states, it also unfairly punishes our state with less federal support for keeping unemployment below the unimaginable levels we've seen in Democrat-run states."