"Last Chance U" basketball coach on DeShaun, Joe and the "hard as hell" grind of junior college ball

"For a lot the kids we’re dealing with, this is their second and last chance. Everyone has given up on them" 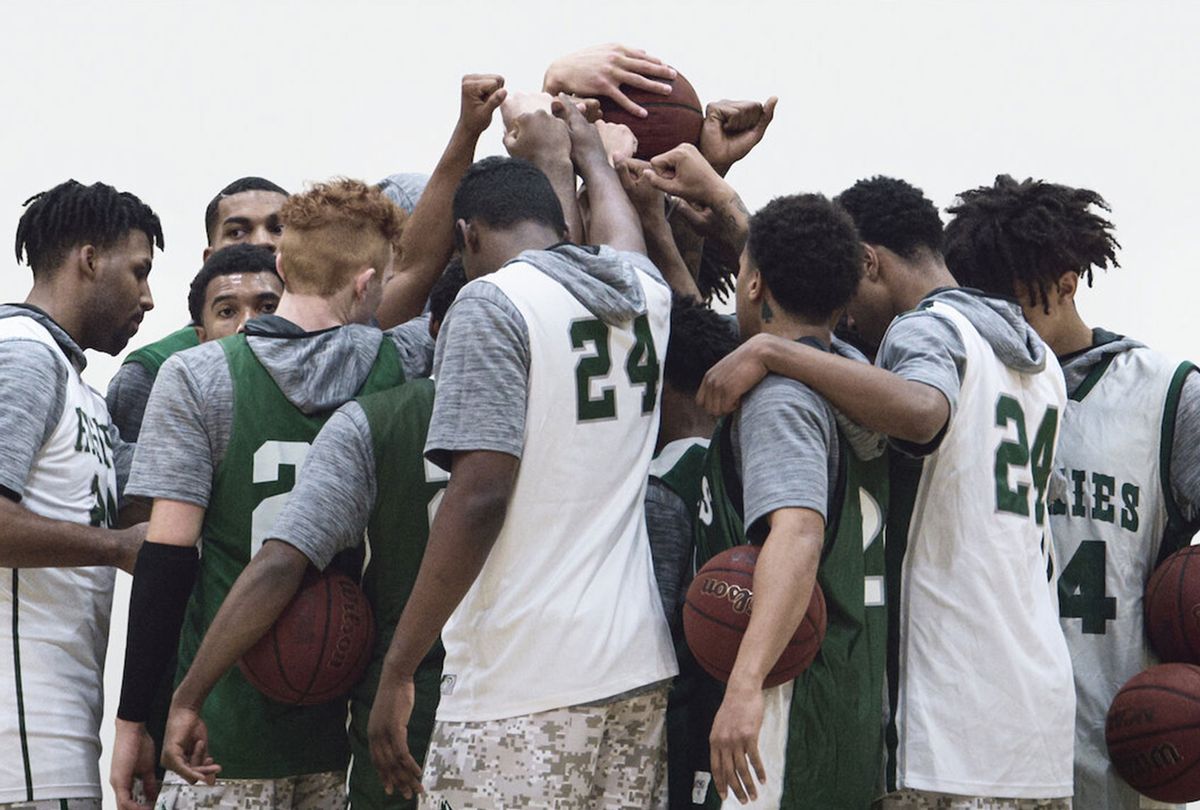 For five seasons, "Last Chance U," a gripping Netflix docuseries by Greg Whiteley, centered on the challenges and victories of junior college (or JUCO) football players, both on and off the field. Now, the franchise is back and the cameras are focused on the basketball players at East Los Angeles Community College as they hit the hardwood and prepare for a championship game that could result in some of the players getting scholarship offers that could change their lives.

The stand-out character in this season is Huskies head coach John Mosley, whose passion for the sport and his teams has him running drills with his players and personally mopping the court because he wants to make sure that it's up to standard. He has a huge heart and seemingly unlimited energy, which is poured into teaching on-campus spin classes, delivering fiery sermons at his church, and motivating a team filled with players who have baggage and chips on their shoulders.

"It's hard as hell here," Mosley tells Salon in an interview. "But it's my job to show these young men that there is a way out, a better way forward."

Mosley spoke with Salon about the unique challenges that face junior college athletes in California — a state that doesn't offer food plans and housing for community college students — how his coaching seasons feel like dog years, and an unaired interaction with star player DeShaun Highler that has stuck with him to this day.

Could you talk a little bit about some of the challenges — when it comes to housing and food — that Junior College students have to deal with that most Division 1 athletes don't?

Here in California, it's a little bit different. In other states, there are scholarship offers for community college or junior college — JUCO — but in California, we don't have dorms. There's no meal plan. We do have a cafeteria, but the kids have to pay for that, which is expensive. So they are either relying on family help or financial aid, but beyond that, the kids get no help.

For a lot the kids we're dealing with, this is their second and last chance. Everyone has given up on them. So some of the kids who want this opportunity here at East L.A. College and are catching public transportation. We had DeShaun [Highler], he was driving from Riverside, an hour and a half each way; I had two young men coming from Santa Clarita, one driving, one catching the train.

Then I've got some men who scrape together some funds and find a "hole in the wall" where a few of them can afford rent together. So that's what they do. That's a lot of factors, and it explains why some of the kids are so emotionally up and down. Like Joe [Hampton], he was living with a few people — ex-teammates — and then staying with his girlfriend. That can bring a lot of emotions that you bring to the court. You see them wear that on their sleeves, like "What are they going through?" and "What did it take for them to be here today?"

I was just talking with the coaching staff last night about the over-under that everyone would be at practice today.

Could you say more about that? About what it takes for some of them to get there?

Yeah, and this is a real story. A young man walks into class, he's got his hoodie on and he's sitting in the back slouched over. The professor maybe automatically assumes that he's not interested and doesn't want to be there. But what really happened is that he was at home and his mom, who is a single parent — her boyfriend stays the night and starts abusing the mom. The boy said, "Don't do that to my mother," and he gets cracked over the head with a trophy.

He shows up to class the next morning still. He had to get stitches the night before, but he still makes it. Then there's those variables, again, of kids not having food and housing. I remember a kid calling, saying, "Coach, I need a ride." I went to get him, and I'll never forget, his mom asked, "Hey did you eat breakfast?"

He said "no," and she just gave him a handful of gummy fruit snacks. He thought it was normal, but he just wasn't eating. So those are some of the things we're dealing with, stuff that can throw off emotions. It's so much easier when you wake up in a nice bed and have three meals a day guaranteed at the student cafeteria.

In the second episode of the show, Coach Rob was talking about how there's still some stigma against JUCO athletics, which can leave players feeling a little defeated. How do you all combat that?

Sometimes — and you'll see this in the series — we have to play into that. We will embrace the underdog attitude like, "Okay, go ahead and dominate this level, you've got to do something special to get out of here."

And I try to promise every young man like, "Look, man, if you do everything you're supposed to do, you're going to get a scholarship and change your life." I tell them that if they can get through this, because I'm grinding them so much, they can deal with any adversity that they have to deal with in life.

I can't control all the variables. I don't know what the heck happens when they go home. You know, are they smoking? Are they doing this, are they doing that? Will they end up in jail, which has happened in the past? Every day I say, "I'll see you guys tomorrow," and I've got to hope that all 15 guys will come back the next day.

I don't want to spoil anything . . . but several players did end up getting offers from D1 programs, so they left East L.A. I was wondering if it's at all frustrating to build a team, everyone is working well together, then you lose players?

That's the unique thing about junior college basketball. We've got this running joke where we say a year in junior college is like dog years, it's like five years anywhere else because you have to make this assessment of who we're dealing with, then you have to break them down and build them up. Then right as it's figured out, they're gone. It starts all over again with a new Joe Hampton or DeShaun Highler.

Again, it's like dog years. I'm worn out, I'm pouring all this energy and I'm exhausted and invested, then they're gone. But the joy of seeing them at the next level is phenomenal, but then it starts all over again.

I want to talk about DeShaun for a minute. You all obviously had a really special bond in the series. As viewers will see, his mom basically said, "I'm leaving you my son," before she passed away from cancer, which is a huge responsibility. Could you talk a little bit about how that guided your relationship with him?

Yeah, I'm going to tell a story that isn't on camera in the series. We were in San Diego for a game and we'd won and for some reason, everybody's family was there. The only person who didn't have anybody was DeShaun. And we're in the vans, ready to go home, and I see him walking around in the parking lot and he's crying and I'm thinking, "Oh gosh, who passed this time?" because both his mom and dad had died.

So I ask him what's going on, and he just falls so heavily on me. And he says, "I've just got questions and I want to talk to my mom. I just want to talk to her." And in that moment, I told him, "You're mine forever — whatever is on your mind, you can always talk to me." And then he dried his tears, gets in the car and goes back to being a jerk again. But to this day, that's true. We just talked last night.

It's apparent from watching the series that your faith is pretty important to you. Does that guide the way you coach or interact with the players at all?

Right, I mean, I'll never force it on anybody, but I let them know it's there if someone is struggling. You've got all these young people with heavy burdens, and if they ask, I'll tell them how I pray, how I spend time in the word, things like that.

I think when we talk about our faith and Christianity, it should be about compassion and salvation, and that it's always there for you. I'm not a professional, not a psychologist or anything, but this is what I have to offer. And it's crazy, the ones who we feel like deserve love the least, they're the ones who need it the most, because they're the ones looking for attention and looking for somebody, and often when they're acting out, they're actually crying out.

We see that several of the players come with some baggage —  tough home lives, issues with the police, injuries. Are there ever times where you feel like a player is too big a risk to bring on?

God, it happens all the time and what's tough is I still have 14 or 15 other guys to worry about, but I just have to kind of assess it. Joe Hampton is a good example. In an interview, I guess I'd said that we didn't need him and I told him later that I didn't mean to be so harsh, but while we do need him to help us win games, it can't be to the point where it's catastrophic to other players getting scholarships.

You know, everybody was telling me, "Hey, this kid is a nightmare, don't touch him with a 10-foot pole," but I saw the diamond in the rough. He's got some baggage and some things that he wants to change, and if I don't help him, then who will?

But if you don't give up on yourself, and you don't give up on the program, you're good. In the eight years I've been here, I think only two guys have quit and walked out and they regretted it. And in community college, and the number of guys that have gone through this program, there should have been a myriad of them.

I was curious what you think of the new sneakers that Stephen Curry and "Last Chance U" collaborated on?

I have a pair and I think they're sweet, man. I was just blown away that anybody would even think of us in this way. I mean, you look at the whole shoe, and it has East L.A. all over it, and the Husky eyes on the back? The colors are just amazing, too.

I'm humbled that somebody like Stephen Curry and his team would engage with us and engage with what we're doing. And in his [Instagram post about the sneakers] he talked about the grind, and yes, it's a grind, but we embrace it. Everybody has their own grind at the community college level, including me.

"Last Chance U: Basketball" is now streaming on Netflix.