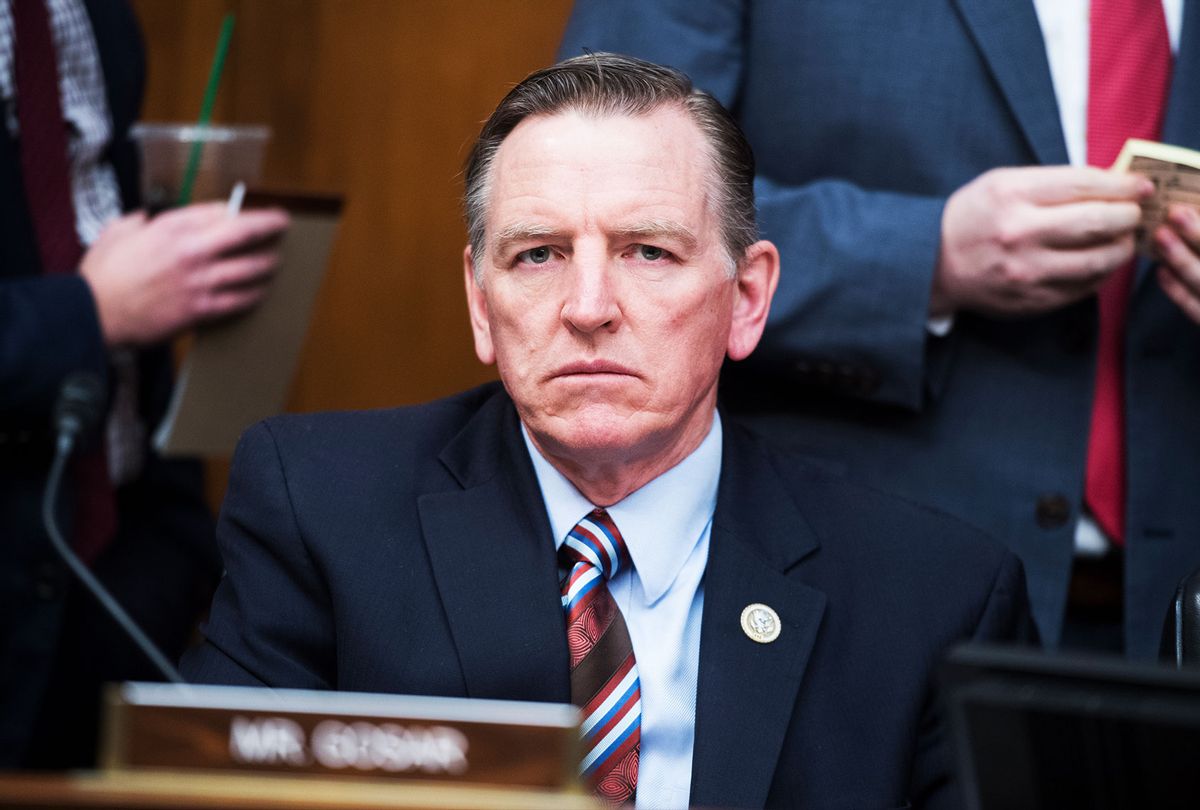 Three siblings of Rep. Paul Gosar, R-Ariz., have renewed their push to remove their brother from Congress, accusing him of being a white supremacist following his speech last month at a conference hosted by a notorious white nationalist.

Gosar, who allegedly helped organize the "Stop the Steal" rally that preceded the Jan. 6 Capitol riot, skipped a late February House vote on the $1.9 trillion coronavirus relief bill to headline the America First Political Action Conference organized by right-wing extremist Nick Fuentes. Fuentes gained prominence in the deadly 2017 Charlottesville white nationalist march and was later banned by YouTube for violating its hate speech rules. At the February conference, he lamented that America was losing its "white demographic core," and praised the Capitol riot as "awesome" after previously musing about murdering lawmakers.

A day later, during an appearance at the Conservative Political Action Conference in Florida, Gosar interrupted a panel discussion, seemingly to distance himself from Fuentes' comments.

"I denounce when we talk about white racism. That's not appropriate," he said at the event, later telling the Washington Post that he was referring to Fuentes' remarks.

Gosar's siblings, who launched campaigns to defeat him in 2018 and 2020, rejected his feeble attempt to distance himself from Fuentes, who Gosar met with again after the CPAC event.

"That was the most nebulous, nonsensical response when I heard about it," Jennifer Gosar, the youngest of the congressman's nine siblings, said in an interview with Salon. "Because what's 'white racism'? Excuse my language — what the fuck is that? Seriously. I thought that was nebulous as hell. … It's that word salad, nonsensical, non-sequential kind of thinking that he's used publicly for years now."

Gosar did not mention AFPAC or Fuentes by name during his comments at CPAC. Nor has he tried to distance himself from the Proud Boys after posing for a photo with a known member last year, nor from the Oath Keepers, which have promoted his comments predicting a coming "civil war" in recruitment videos. Members of both groups face conspiracy charges after they were seen in videos coordinating with each other during the riot.

Gosar's office did not respond to questions from Salon.

Tim Gosar, another of the congressman's younger brothers, pointed out that Fuentes launched a fundraising campaign to defend Gosar after his appearance at AFPAC.

"He doesn't have any way to be able to denounce them, because he is them," Tim said. "And he's raising money off this. That's the most despicable part about it. He's using these people to raise money for him."

Whatever the significance of his CPAC comments may be, Gosar later tweeted out a cartoon of a sex worker that included the motto of Fuentes' America First group.

All three Gosar siblings said they believe their brother's efforts to cozy up to the group show he is a white supremacist.

But the siblings, who fell out with the congressman years ago over what Dave described as "race-baiting, racism and anti-Semitism," said there was little indication of extremism before he entered politics.

"It's political, absolutely," said Dave, an attorney in Jackson, Wyoming. "I don't think he stands for anything. I don't think he has any character left. It's like, 'What do I need to say? Who do I need to pander to to get money or get ahead?' … This is who Paul is. But you know what, ultimately it doesn't matter. I mean, how many people actually believed in the Nazi Party at the time, and all that bullshit? Did it matter? No, because it ended up continuing that momentum, continuing their takeover of power and the ultimate disaster that happened.

"So it doesn't really matter what you actually believe inside when you are lending yourself, your name, your influence and energy to a movement. You don't get to say you're not a white supremacist when you endorse white supremacists. You just don't get to. You passed that Rubicon, you crossed it."

Tim interjected to add that he views his brother as a "very small man in mind, in heart, and the attributes that really matter in life."

Former Republican lawmakers have called on the party to strip Gosar of his committee assignments and condemn his appearance at AFPAC, but so far the party has remained silent on the topic. The Southern Poverty Law Center said in a statement to Salon that it was "unimaginable" that Gosar's colleagues would not hold him accountable for participating in a "gathering of white nationalists." The sole GOP exception has been Rep. Liz Cheney, R-Wyo., who recently drew intraparty condemnation after speaking out against Trump and Rep. Marjorie Taylor Greene, R-Ga.

"I think the organization that [Gosar] spoke to is one that has expressed views that are clearly racist. … This is not the kind of an organization or an event that other members of Congress should be participating in," Cheney told Politico, adding that the party has to "stand against white supremacists, stand against anti-Semitism."

Gosar's siblings expressed disappointment that Democratic leaders have been silent as well, arguing that the congressman should be stripped of his committee assignments, as Greene was, and denounced by the party like former Rep. Steve King, R-Iowa, who also spoke at AFPAC.

"Nobody in leadership says anything. There's no pushback whatsoever," said Dave. "Here's a guy actually associating himself with a Holocaust denier who said just the most despicable things about the Holocaust and Jim Crow and all this stuff. Not a peep from Nancy Pelosi, Chuck Schumer, of course Republicans."

Rep. Jamie Raskin, D-Md., the lead impeachment manager in Trump's trial on a charge of inciting the riot, has been a rare exception.

"The idea that a sitting member of Congress would go and show his support and solidarity for racist white nationalists is an outrage," he told Politico earlier this month. "But it is a terrible statement about the moral deterioration of the Republican Party. I would hope that the Republican caucus would immediately take action against members who are consorting with white nationalists."

Jennifer, a linguist and interpreter in Seattle, also called out Gosar's financial backers at the American Dental Association PAC and other dental groups that have donated hundreds of thousands to the former dentist's campaigns.

"They haven't denounced it yet," she said. "A major organization for health care. What have they got from Paul Gosar's presence in Congress for dental access, for dental health, for general access to health care or support for people? They got tax breaks. And they still won't denounce him."

Dave also questioned why Democrats have not focused more on Gosar in their response to the Capitol riot, noting that a recent lawsuit filed by Rep. Eric Swalwell, D-Calif., named Rep. Mo Brooks, R-Ala., who allegedly "schemed up" the Jan. 6 rally with Gosar, organizer Ali Alexander, and Rep. Andy Biggs, R-Ariz. For unclear reasons, the suit did not name Gosar.

"Does he have to show up at Nancy [Pelosi's] house and burn a cross on her lawn? Does he have to do that for her to give her attention?" Dave asked. "There seems to be some kind of bubble around him where he won't get criticized by other members of Congress, which is just unbelievable to me."

Some progressive lawmakers have not hesitated to denounce Gosar. Rep. Pramila Jayapal, D-Wash., the chairwoman of the Congressional Progressive Caucus, this week called for an ethics investigation into Gosar, as well as Brooks and Rep. Lauren Boebert, R-Colo., accusing the lawmakers of "instigating and aiding" the riot.

"Representative Gosar has not released any statement across his public platforms denouncing the rioters or apologizing for his previous statements or role in inciting violence," Jayapal wrote.

Rep. Zoe Lofgren, D-Calif., the chairwoman of the House Administration Committee, issued a 2,000-page report last month detailing thousands of social media posts by Republican lawmakers that spread lies about the election before and after the Capitol riot. Tweets posted by Gosar took up 177 pages of the report.

Dave Gosar echoed Bush in calling to use the 14th Amendment to remove his brother and others, arguing that they have "forfeited" the right to be members of Congress. Legal experts have noted that the 14th Amendment has never been used to expel a member, and that the third clause of the amendment — which allows Congress to exclude representatives who have "engaged in insurrection or rebellion … or given aid or comfort to the enemies thereof" — has never been tested in the Supreme Court. Using this to remove members would be a difficult task, law professors told Roll Call. Dave Gosar says Democratic leaders should make an example of his brother.

"You have the power to do this but the Democrats are so incredibly weak," he said. "I mean, what does it take? Would Nancy Pelosi or any member of Congress, Chuck Schumer, would they have to actually get hurt before they get their attention?"

Jennifer argued that Democrats were more forceful in going after Greene even though Rep. Gosar "has a much longer history of bigoted comments, white nationalist ties," as well as a record of pushing Trump's "big lie" about nonexistent election fraud.

"It's a sexist double standard between the two of them, honestly," she said. "He's had the platform longer so I think he's actually more of a danger in that respect and should be censured [and] stripped of all committee assignments."

Tim argued that punishing his brother should be a job for law enforcement agencies and prosecutors. While Justice Department prosecutors are going after the "dummies that stormed the Capitol," he said, they should focus on the "people that masterminded it like Paul, like Trump, like Biggs, like Brooks."

Gosar, Tim said, is "Trump's right-hand guy in this whole thing. He just is. He's as deeply connected to Trump and this insurrection as anybody, or more so."

The Gosar siblings acknowledged that their campaigns to remove their brother from Congress have been difficult on their family. Their mother told The New York Times in 2018 that she was "crushed" by the campaign against her son and said she shares "the same philosophy and policies that Paul does."

Dave said their mother agrees with Paul because she relies on Fox News' prime-time opinion shows for news coverage, and "would rather do that and push away most of her children to hold on to that cultish lie and be in that cult."

"This hate and this anger and all this stuff that [Paul Gosar and his mother] hold onto, that's the core of them," he added. "If they give that up, they're lost."

The siblings said they decided to speak out not out of any longstanding grievance but because they did not want to be tied to their brother's racism.

"We would have all been painted with that brush, 'You guys, the Gosars, that white supremacist family,'" Dave said. "We can't be vocal enough, because we want to make sure. We want him out because he's a dangerous, unhinged person. But we also want to make sure that it's crystal clear we want nothing to do with this."

Tim said that since the siblings started speaking out their brother has grown more dangerous, pushing to downplay the coronavirus pandemic before Arizona's caseload exploded and pushing to repeal Obamacare, which his siblings say they rely on for health coverage.

"You've got somebody that's not only lying to people but he's putting them in harm's way," Tim said. "You could go on and on about this stuff and the things that he's done. So I want you to realize that this just isn't about the Affordable Care Act. It's about the environment, it's about separating kids, it's about giving people that are at risk even more advantages in life, it's about COVID and people's ability to live and thrive. This guy is a danger to people. We want people to realize that's who he is."