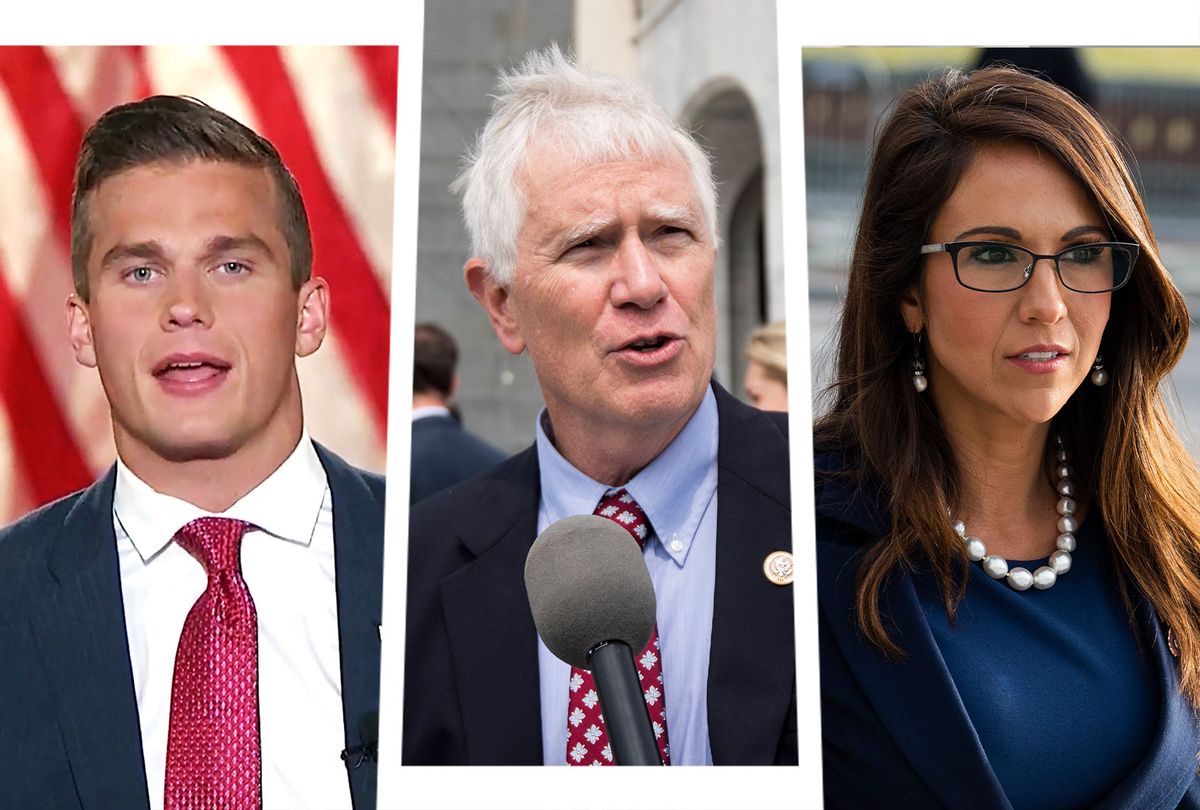 Members of Congress have discussed special security measures to ensure that fellow lawmakers sympathetic to President Trump's false election claims do not aid in any new plot against the U.S. Capitol or President-elect Joe Biden's inauguration during a briefing on three specific threats detected by federal authorities, according to HuffPost.

Newly-installed leaders of the Capitol Police briefed House Democrats on a private call Monday about three separate plots against lawmakers and Biden's inauguration, according to Axios and CNN.

Officials warned lawmakers of a plot to surround the Capitol, White House and Supreme Court and potentially assassinate lawmakers. One alleged plan called for the "largest armed protest ever to take place on American soil." Another plan included a protest in honor of Ashli Babbitt, the Trump supporter killed by police while trying to breach the House chamber during Wednesday's riot.

One lawmaker told HuffPost that the discussion included the need to put every member of Congress through a metal detector before the inauguration.

There was an "eyes-wide-open realization," the unidentified lawmaker told the outlet, that Capitol Police needed to take precautions against "all these members who were in league with the insurrectionists who love to carry their guns."

"You can't just let them bypass security and walk right up to Biden and [Vice President-elect Kamala] Harris at inauguration," the lawmaker said.

"It's not clear to what extent the rioters were coordinating operationally with government officials, so we ought to be extremely careful in this line of inquiry. But we must discover which elected and appointed officials, if any, and which civil servants, were helping the coup," he wrote on Twitter.

Several other lawmakers, including Rep. Steven Horsford, D-Nev., and Rep. Hank Johnson, D-Ga., have suggested the riot may have been an "inside job," though those comments appear to have been in the context of questions about the police response. Two Capitol Police officers have been suspended and 10 to 15 others are said to be under investigation over their actions during the riot.

Other members of Congress have raised questions about how the mob was able to navigate its way through unmarked and non-obvious areas of the Capitol complex. Rep. Jim Clyburn, D-S.C., the third-ranking House Democrat, suggested that something "untoward" happened after rioters went looking for him in an unmarked office rather than the main office labeled with his name.

Despite the riot, 147 Republicans, including seven senators, voted to overturn election results in multiple states during the joint session of Congress that was interrupted by the siege and resumed shortly after. While Sen. Josh Hawley, R-Mo., and Sen. Ted Cruz, R-Texas, have faced widespread condemnation and calls for their resignation or expulsion after leading the effort, many House Democrats have raised questions over their colleagues' statements seeming to cheer on the riot.

A group of House Democrats singled out freshman Rep. Madison Cawthorn, R-N.C., arguing in a letter to House Speaker Nancy Pelosi, D-Calif., that he "needs to be held accountable for his seditious behavior and for the consequences resulting from said behavior," according to the Associated Press.

Cawthorn spoke at an event hosted by the pro-Trump college Republican group Turning Point USA on Dec. 21, where he appeared to threaten lawmakers who did not support Trump's baseless election rigging claims.

Cawthorn later spoke at Trump's rally that preceded the riot, exclaiming, "Wow, this crowd has some fight in it."

Cawthorn, who was a featured speaker at last year's Republican National Convention, later called the violence "sickening and infuriating" and argued that Trump "never should've directed that crowd toward the Capitol."

Some Democrats also criticized freshman Rep. Lauren Boebert, R-Colo., for statements she made on Wednesday.

"Today is 1776," Boebert declared on Twitter before the riot, echoing a similar comment from Rep. Marjorie Taylor Greene, R-Ga., a QAnon conspiracy theorist. After Trump's supporters breached the Capitol, Boebert tweeted that "the speaker has been removed from the chambers."

"We were specifically instructed by those protecting us not to tell anyone, including our family, where exactly we were, for reasons that remain obvious," Schatz said in response to Boebert's tweet.

Rep. Eric Swalwell, D-Calif., added that Boebert "was told by the Sergeant of Arms in the chamber to not make any social media posts. It was said repeatedly. She defied it because she is more closely aligned with the terrorists than the patriots."

"Like any citizen who has committed a crime, Lauren Boebert has the right to remain silent," Swalwell said in another tweet after Boebert accused Democrats of "endless conspiracy theories." "I suggest that she use it."

Boebert has been defiant since the riot, accusing Democrats of "hypocrisy" with "talks of impeachment, censure, and other ways to punish Republicans for false accusations of inciting the type of violence they have so frequently and transparently supported in the past."

Her comments were in stark contrast with House Minority Leader Kevin McCarthy, R-Calif., who said he admonished the president for claiming "antifa people" were behind the riot.

"It's not Antifa, it's MAGA. I know. I was there," he told the president, according to Axios.

McCarthy has issued several forceful comments condemning Wednesday's violence without mentioning that he led the Republican objections in the House when the joint session resumed following the siege. Before he led a majority of his party in voting to overturn millions of legal votes, McCarthy and more than 120 other House Republicans had supported the Texas lawsuit seeking to throw out millions of votes in four states, which was unanimously rejected by the Supreme Court.

Rep. Mo Brooks, R-Ala., one of the most ardent supporters of the Republican bid to disenfranchise millions of voters, has also drawn scrutiny for his remarks.

"Today is the day American patriots start taking down names and kicking ass," Brooks declared at the rally before the riot. "Are you willing to do what it takes to fight for America? Louder! Will you fight for America?"

Rep. Tom Malinowski, D-N.J., has introduced a resolution to condemn and censure Brooks, arguing that his speech "encouraged and incited violence against his fellow Members of Congress" and that since then Brooks has "shown no remorse or regret."

"Not only did Congressman Brooks fuel an insurrection against the body he serves in," Rep. Debbie Wasserman Schultz, D-Fla., said in a statement, "his words helped spark chaos, destruction, injuries, and death."

Rep. Paul Gosar, R-Ariz., promoted the false election fraud claims and the Jan. 6 protest dozens of times and called Biden an "illegitimate usurper" while claiming Trump was the victim of an attempted "coup." After meeting with Trump in December, Gosar vowed that he would "not accept disenfranchisement" of Trump voters and said "this sedition will be stopped."

When rioters breached the Capitol, he urged calm, tweeting, "Let's not get carried away here." But on Parler, a far-right social network that has since been taken down, he posted an image of people scaling Capitol walls, writing, "Americans are upset."

Ali Alexander, a far-right activist and an organizer of the "Stop the Steal" rally has claimed that Brooks, Gosar and Rep. Andy Biggs, R-Ariz., were involved in planning the Jan. 6 event.

"We four schemed up of putting maximum pressure on Congress while they were voting," he said in a since-deleted video, "so that who we couldn't rally, we could change the hearts and the minds of Republicans who were in that body, hearing our loud roar from outside."

A spokesperson for Biggs disputed that he had ever met or had contact with Alexander or any of the rioters.

Freshman Rep. Cori Bush, D-Mo., has introduced a resolution with 47 co-sponsors that would begin investigations for "removal of the members who attempted to overturn the results of the election and incited a white supremacist attempted coup."

Bush says she does not know how many members of Congress deserve to be expelled.

"Even if it's just a few, we have to make sure the message is clear," she told The New York Times, "that you cannot be a sitting Congress member and incite an insurrection and work to overturn an election."