Small farmers are struggling after the Texas big freeze

Small, diversified farmers are bearing the brunt of a lack of state support 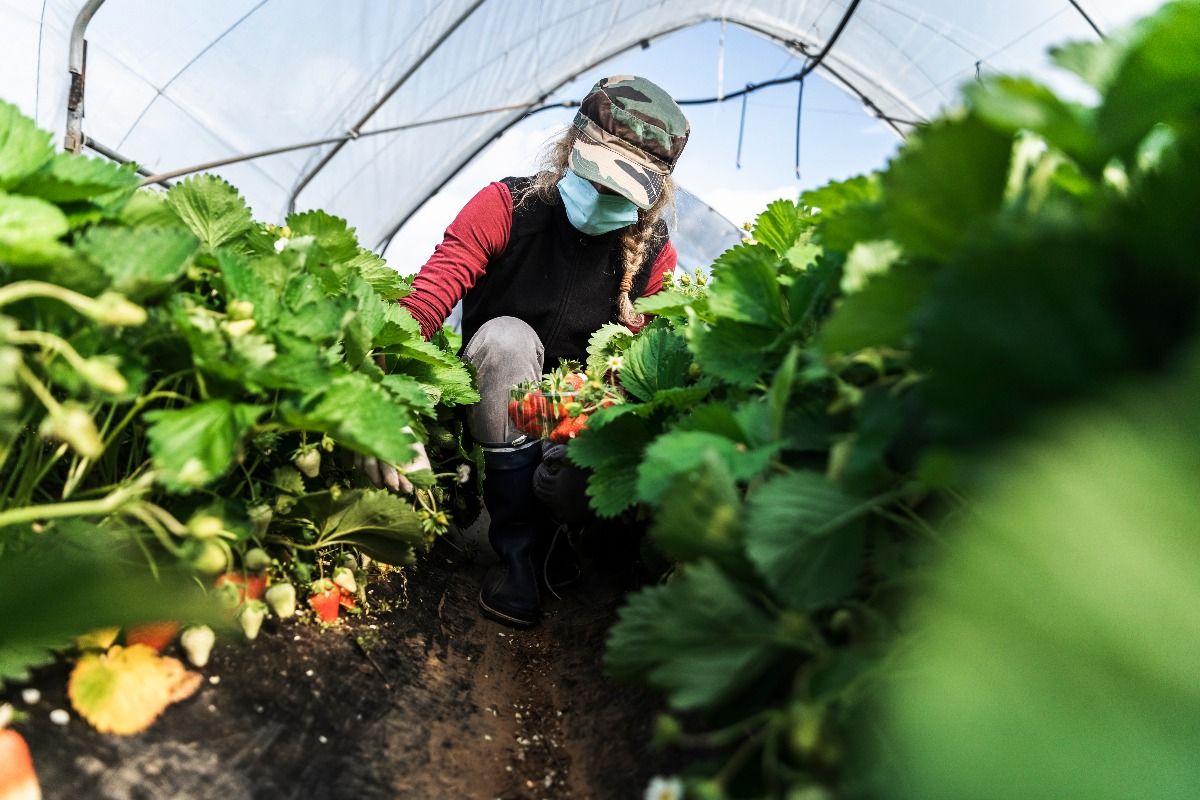 Carolina Mueller and her partner were starting crops ranging from onions to broccoli in their greenhouse and tending to a collection of winter crops growing at Middle Ground Farms, their small, diversified organic vegetable farm outside of Austin, when the unprecedented snowstorm and deep freeze hit last month.

All the crops they had in their fields — parsley, purple sprouting broccoli, radicchio and chard — were lost in the freeze. And because the storm overwhelmed the state's deregulated power grid, triggering widespread blackouts, their irrigation pumps shut down, so Middle Ground Farm lost access to water.

They weren't able to water the plant starts and lost a whole round of young plants, setting them back by weeks if not months, and likely creating gaps in production for their wholesale clients and the community supported agriculture (CSA) subscription they provide in the Austin area. In total, they estimate they lost $30,000 worth of output.

"The thing with the freeze is, it wasn't just a weather event. It was a total system collapse," said Mueller, who is also president of the Central Texas Young Farmers Coalition.

Read more Civil Eats: California's Vaccine Rollout Has Yet to Reach Most Farmworkers

Mueller is far from alone. In addition to resulting in dozens of deaths, the failure of the state's power grid caused millions in damages for farmers across the state. According to The Texas Tribune, more than half of the region's grapefruits and nearly all of the Valencia oranges have been lost, and citrus farmers in the region will also likely have no crop for next year. Livestock losses were also widespread, and could reach $228 million in costs and lost income for farmers and ranchers as herds and flocks died in the freeze and feed costs skyrocket.

Although the Big Freeze was at the top of the news cycle for the second half of February, outrage over the failures that led to the energy crisis is already cycling out of the headlines. But for small and diversified farmers, the losses are especially significant and will continue for months to come.

Becky Hume, who runs VRNDT Farm, is facing a catastrophic scale of loss. "This frost coming through has basically killed all mature vegetables and wiped me out of all saleable crops. Thankfully, some really young carrots, really young beets are going to survive and bounce back, but anything that was close to maturity is completely gone," Hume told Civil Eats.

In the midst of the pandemic, these crop losses will drive up food costs and even cause shortages at food banks when needs are high. The crop loss is causing the state's food banks to rethink their sourcing, ramping up their purchasing from out-of-state, which drives costs up.

Looming shortages of transplants and seeds

The impacts in the Rio Grande Valley don't just affect their agricultural output.

"The next wave of problems is going to be finding transplants. All of these young plants have been lost," said Judith McGeary, director of the Farm and Ranch Freedom Alliance, which advocates for the rights of small-scale farmers in the state. McGeary noted that much of the state's young seedlings and transplants come from nurseries in the region. "Sourcing transplants and replacement plants is going to be far more expensive."

For instance, she said, "the farmers in the [Rio Grande] Valley produce huge amounts of melons for the conventional system." The state's watermelon industry says it produces 15% of the total domestic watermelon crop.

In addition to her advocacy work, McGeary is a farmer, growing melons, lemons, and other crops on 165 acres. "Even those of us who are very small melon producers are not sure we will be able to source what we normally would for transplants for our small operation," McGeary added.

The gardening boom that arose early in the COVID-19 pandemic has driven up demand for seeds and strained the nation's seed supply chain, with seed companies struggling to keep up as more Americans started growing their own vegetables. This latest weather event created the perfect storm to overwhelm this already-stressed supply chain.

"For a lot of farms, that's a real shortage, and because of COVID there have been incredible supply shortages in the seed supply chain. Seed suppliers have a two- to three- week backlog before they can even ship seeds, VRDNT's Hume said. "In Texas, that delay could mean a delay in — and ultimate loss of — some production. This is happening when supply chains are already stressed out and not functioning as normal. It is definitely a compounding situation."

Financial help has also been fairly limited. Small-scale farmers have been reliant on GoFundMe pages to get funding, since many don't have crop insurance plans.

"For small, diversified vegetable farms, crop insurance is either extremely difficult or non-existent. For a large commodity farm, it is a lot easier to assess how many soybeans were lost and how much that costs," Hume explained.

The farmers who spoke to Civil Eats said they don't anticipate receiving help from the USDA or the state of Texas. The Texas Department of Agriculture (TDA) did not respond to a request for comment.

"The state of Texas is really bad with small- and medium-sized farmers, especially vegetable farmers. At best they're unfriendly and at worst they are hostile to us through their policies," Middle Ground Farms' Mueller added. While the average farm size in Texas is 511 acres, the vast majority of farms in the state are small: According to the latest U.S. Department of Agriculture's (USDA) ag census, 71% of the farms in Texas are smaller than 180 acres.

Crop insurance is calculated by the average crop yield in an area based on previous year output. That strategy doesn't always work when farmers grow a diverse rotation of crops. As many see it, the program incentivizes farmers to plant the same crop year after year. According to one 2009 study published in The Journal of Agricultural Economics, farm operators became slightly more specialized —i.e., they grew fewer crops overall—in response to policy-induced increased in federal crop insurance.

When farms opt not to specialize, their options for coverage are limited. The Whole-Farm Revenue Protection (WFRP) program is one promising option, but it's relatively new and not all small farmers feel they can opt for that level of protection.

And one of the most robust and popular assistance programs, the USDA's microloan program, barely makes a dent for struggling farmers: It awards up to $35,000 to beginning small and medium-sized farmers.

Read more Civil Eats: TikTok Sensation Alexis Nikole Nelson Wants You to Love Foraging as Much as She Does

The TDA isn't providing any funds from the state budget, although it has started the State of Texas Agriculture Relief (STAR) Fund, which funded by private donations.

"The TDA STAR Fund consists of donations from private citizens, corporations, and organizations committed to supporting Texas farmers and ranchers. No state money is used in the Fund," the Texas Department of Agriculture said in a release. And the fund limits payments to farmers to $4,000.

Others have stepped in where the state hasn't. In Austin, the Sustainable Food Center has started a fund to help farmers in Central Texas. The Texas Farmers' Market also launched a relief fund.

Farmers are largely banking on the Paycheck Protection Program in the wake of the pandemic-induced economic downturn, which could provide farmers a maximum loan amount of $20,833. It's still to be seen how far down the newly passed relief bill's benefits will trickle; the last round of efforts did not reach small farms.

Beyond the hodgepodge of emergency financial assistance options, these farmers see their only remaining choices are to prepare for the future — to do everything possible to ensure it doesn't happen again, or at least mitigate their risk for significant damage.

As climate change makes extreme weather events like this more common, farmers are scrambling to find a solution to ensure their farm's longevity.

But preparing for resilience measures now is a significant Catch-22. "I am looking at how to build resilience into the farm, but . . . as a young business owner and a young farmer, it's just so hard to access capital, it's hard to get the farm going," Hume said.

McGeary thinks one of the answers lies within better soil management. "The [impacts of] severe storms, the droughts, can certainly significantly be mitigated by healthy soils," McGeary said.

"We need regenerative methods that build these healthy soils, these biologically active soils. By doing so we can mitigate climate change. Not just on the farms, but more broadly because it sequesters carbon," McGeary says.

The state's failure to provide a systemic solution leaves farmers to their own devices. For example, Hume suggested that farmers building a seed and transplant safety net for themselves.

A few months back, she planted more transplants than she needed on the farm with the intention of selling them. But when the freeze wiped out her mature crops, she needed to use the extra starts to replant the farm. "That was very serendipitous, but I've learned that may be a good plan for resilience in the future."

Mueller says becoming more resilient in the face of extreme weather will require an investment in infrastructure. "There are a couple of things we are already fixing to do. One of those is building insulated structures to protect the wells, and even insulating the pipes themselves . . . Another might be digging our irrigation deeper," she says.

Farmers across the state see the freeze as a wake up call: They need to prepare for a future of climate change-fueled extreme weather. Whether or not the politicians in the state capitol got the same message is yet to be seen.