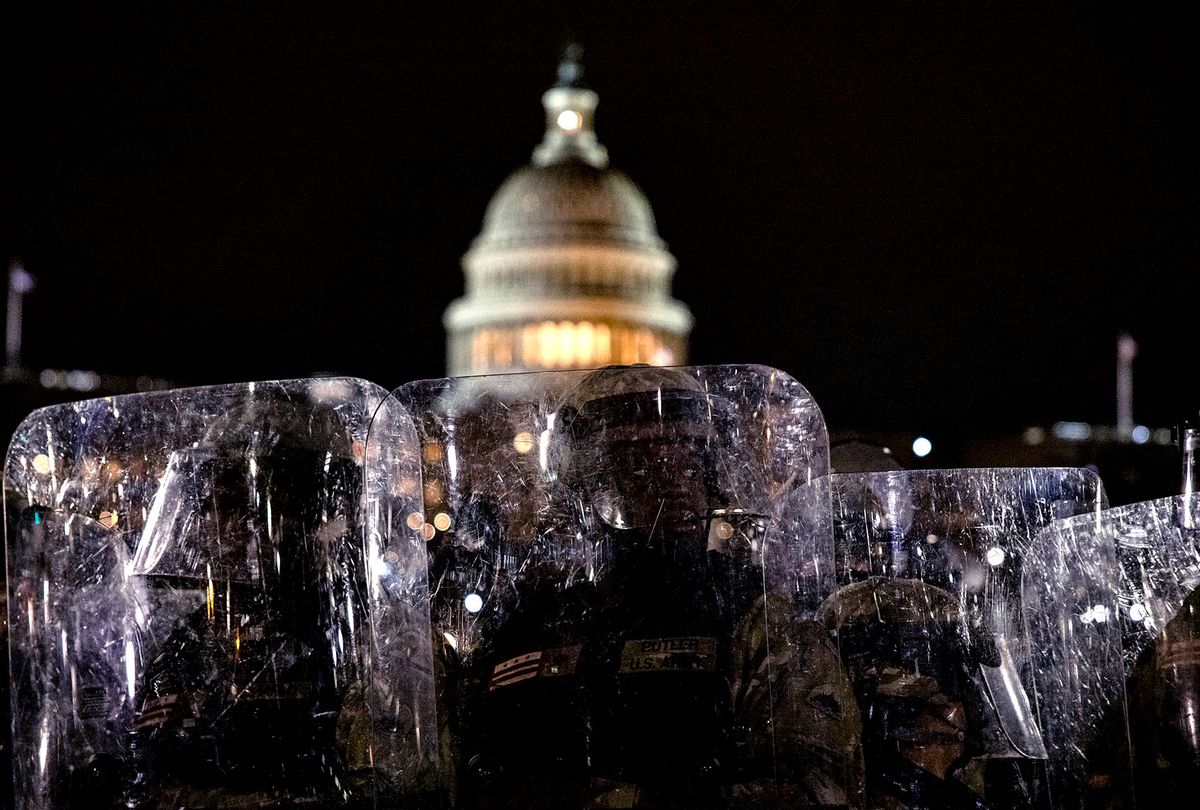 Members of the National Guard and the Washington D.C. police stand guard to keep demonstrators away from the U.S. Capitol on January 06, 2021 in Washington, DC. A pro-Trump mob stormed the Capitol earlier, breaking windows and clashing with police officers. Trump supporters gathered in the nation's capital to protest the ratification of President-elect Joe Biden's Electoral College victory over President Donald Trump in the 2020 election. (Samuel Corum/Getty Images)
--

The Army reportedly pushed back on the D.C. government's request for the National Guard to fortify the Capitol building during the lead-up to Jan. 6, indicating that top officials at the Pentagon had downplayed the potential threats of far-right extremism.

According to a memo obtained by The Washington Post, Army officials were primarily motivated out of fear of public perception when they told city officials that they would only deploy the National Guard if more than 100,000 demonstrators were expected to attend the rally. The memo detailed that the Army rejected the city's request for backup because the city had not exhausted the help of other agencies, a move that was out of the ordinary:

District officials routinely ask for help from the D.C. Guard for major events, mostly to help with traffic control to free up police officers for other duties.

The D.C. Guard, for example, helped with last year's July 4 event and aided the city in handling a march on Washington led by the Rev. Al Sharpton last August. The Guard even deployed to prevent large crowds from gathering and spreading the coronavirus during the 2020 cherry blossom festivities.

Army Secretary Ryan D. McCarthy was eventually pressured by defense secretary Christopher C. Miller and the chairman of the Joint Chiefs of Staff, Gen. Mark A. Milley, to grant the request on the condition that one federal agency was charged to lead the security and other agencies "exhausted their assets to support these events."

Col. Cathy Wilkinson, a spokeswoman for the Army, objected to the notion that the Army may have shirked its responsibility leading up to the riot, citing the 340 members of the National Guard it had deployed to manage traffic and crowd control. "Clearly, the Mayor's request was approved and supported," Wilkinson pushed back. "The draft memo was not signed or approved. It is customary for the Army staff to provide options for Army senior leaders to inform their decision making process."

Some generals have maintained that the D.C. Guard's arrival three hours after the call does not reflect a delayed response, however. "We were asked to support the Capitol from a cold start after it already had been overrun and are being criticized for how we fast we responded," said a former Pentagon official familiar with the riot. "We are not like law enforcement units whose job it is to police the streets."

According to the Washington Post, fears of over-militarization in the wake of the George Floyd protests –– in which state-sponsored violence against citizens ran rampant in D.C. –– may have played a role in dampening the military's willingness to involve itself in securing the Capitol building.

Senior officials were also reportedly "very cognizant" that deploying the Army "could be misconstrued by so many people as a power grab and play into the narrative that the military was on the cusp of overthrowing duly elected officials to redo an election."

One official emphasized that the military should not be used preemptively. "It is customary practice," he said, "that law enforcement assets have to be utilized and near exhaustion before DoD will support operations. It is not an official policy but is designed to reinforce that military should be used as a last resort."

Historically, however, the Guard has deployed on a variety of different occasions in advance of events that require heightened levels of security in D.C. For example, the Guard was deployed for the march on Washington led by the Rev. Al Sharpton in 2020 and was used to prevent large crowds from gathering during last year's annual Cherry Blossom due to COVID restrictions.

A district official told the Washington Post that they couldn't recall a single incident in which the Defense Department rejected the D.C. request to roll out the National Guard before Jan. 6.