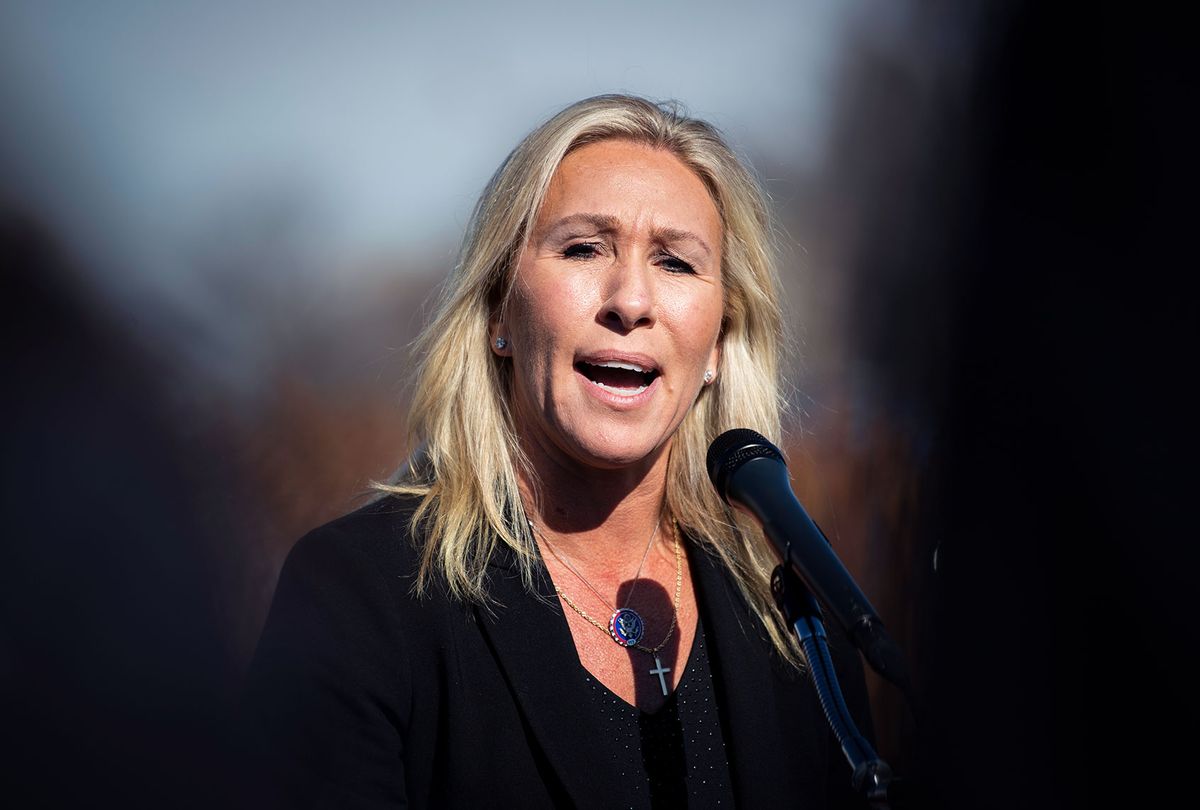 Rep. Marjorie Taylor Greene, R-Ga., on Tuesday demanded that the Pentagon withdraw National Guard troops from the U.S. Capitol after accusing a delegate leading members of the Guam National Guard of trying to "ambush" her with treats and factual information.

Del. Michael San Nicolas, a nonvoting Democrat who represents the U.S. island territory of Guam in Congress, led a group of Guam National Guard members stationed at the Capitol to Greene's office on Monday with cookies and guidebooks after the freshman Republican had earlier referred to Guam as a foreign country.

Greene, who was not present at the time of the visit, responded by sending a letter to top Pentagon officials alleging a "dangerous and troubling trend" of lawmakers using members of the armed forces to "intimidate civilians, harass members of Congress and their staff and attack conservative journalists for expressing their views." The letter claims that San Nicolas and two dozen troops tried to "ambush my office unannounced and subsequently video record my staff without solicitation or consent."

Greene drew criticism earlier this month for describing the U.S. territory as a foreign country in comments she apparently made in a side room to a small group at the Conservative Political Action Conference in Orlando last month after being snubbed from the main stage.

"We believe our hard-earned tax dollars should just go for America, not for, what, China, Russia, the Middle East, Guam, whatever, wherever. Right?" she said in a video streamed on her Facebook page. "If we want to build roads, if we want to put money into schools, if we want to build border walls, we want it right here at home."

Guam has been a United States territory since 1899 and those born on the island have been considered U.S. citizens since 1950. The island's officials responded to Greene's comments by offering to educate her.

"We would be more than happy to send Representative Greene's office a copy of 'Destiny's Landfall: A History of Guam,'" the office of Democratic Gov. Lou Leon Guerrero told the Guam Daily Post.

"Congresswoman Greene is a new member, and we will be paying a visit to her and delivering delicious Chamorro Chip Cookies as part of our ongoing outreach to new members to introduce them to our wonderful island of Guam," San Nicolas told the outlet.

San Nicolas made good on his promise on Monday, bringing along a group of National Guard troops to Greene's congressional office while toting cookies and guidebooks about Guam. Greene's aides explained that she was not in the office and promised to let the delegate know when she returned.

"They all wanted to say thank you for making sure Guam is included in all the work that you do," San Nicolas told the Democrat in a video posted to Facebook.

It's unclear whether Greene ever contacted to San Nicolas and the troops but she responded to the visit by writing a letter to Defense Secretary Lloyd Austin and Daniel Hokanson, the chief of the National Guard, demanding they withdraw all National Guard troops who have been stationed at the Capitol since the deadly Jan. 6 riot.

Greene accused lawmakers of using the troops to "intimidate" and "harass" conservatives, citing President Joe Biden's "unnecessary mass military occupation" during his inauguration even though they were stationed there under Trump, and Pentagon spokesman John Kirby's criticism of Fox News' Tucker Carlson for mocking pregnant service members, along with San Nicolas' visit.

San Nicolas hit back at the criticism from Greene, who has previously called for Pelosi to be executed, urged supporters to "flood the Capitol" and spent months pushing lies about the election.

"That criticism is unfounded. We were not at all using military service members for political props. I was taking my guardsmen on a tour of the Capitol, and we stopped at several members' office, and we delivered some goodies," he told CNN on Tuesday. "Cookies should never be considered a political prop, but neither should our military. But goodwill is absolutely something that we wish to extend from Guam to everybody, and my guardsmen wish to extend the same, and we're very honored to be able to facilitate that."

The National Guard also pushed back on the criticism, arguing that the troops remain a "non-partisan entity."

"We appreciate Congressman San Nicolas' efforts to represent our culture of Inafa' Maolek, or bringing harmony, practiced here in Guam," Maj. Gen. Esther J.C. Aguigui of the Guam National Guard said in a statement to the Military Times. "We also thank Congresswoman Greene for ultimately helping raise awareness of Guamanians as citizens of the United States, and our rich tradition of service and sacrifice to our nation."

Military.com reported it was "unclear whether any military rules were broken" and that "no soldier in the video advocated for any political action, and simply meeting with a member of Congress in uniform is not against any military policy."

Phil Flores, the former chairman of the Guam Republican Party, said he also tried to reach out to Greene to "educate her." Flores told the Guam Daily Post that Greene's lack of knowledge about the island was "really disappointing." He said the incident highlighted the fact that many people in the United States don't "know about Guam," noting that his son, a former West Virginia University student, would show his Guam ID at bars but "they would not accept his Guam ID because it's from a 'foreign country.'"

"This is not the first time, nor will it be the last, that our island is mistaken for foreign soil when the fact remains that we have been woven into the fabric of the United States for over a century," she said in a statement to the Daily Post. "Our mutually beneficial relationship with the United States has long afforded us many privileges, however, our people and our many contributions remain unknown and unimportant to many Americans. This urges us to not only continue making our island known, but to also amplify our voices and implore our national and federal governments to give Guåhan and our people the committed support we need in our quest for self-determination."