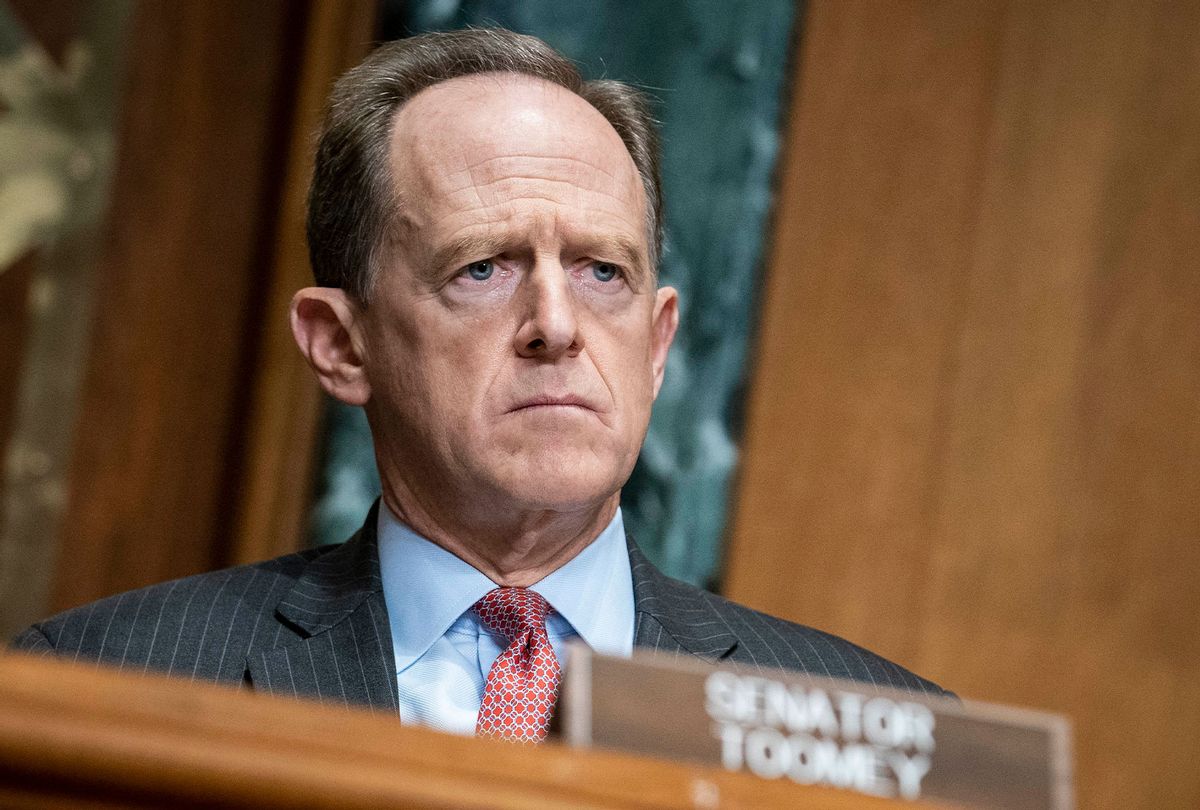 Sen. Pat Toomey, R-Pa., on Thursday blocked a bill that would bar private debt collectors from seizing the $1,400 stimulus checks included in the latest round of coronavirus relief.

In last December's relief bill, the Senate included a measure preventing debt collectors from seizing the payments from people with court rulings against them for unpaid bills after some people had payments seized following passage of the CARES Act last spring. Democrats were forced to remove that provision from the $1.9 trillion American Rescue Plan passed earlier this month because it did not comply with the rules of budget reconciliation, the process used to pass the bill with a simple majority vote.

Sens. Ron Wyden, D-Ore., and Sherrod Brown, D-Ohio, tried to pass legislation on Thursday to block debt collectors from seizing the payments with unanimous consent. The bill would instruct the IRS to tell banks not to honor court orders to seize the deposits.

"We wanted to include them just like was done in the December relief bill. But the problem was Senate rules don't allow Sen. Brown and I to include these protections in the American Rescue Plan," Wyden explained on the Senate floor, adding that the chamber "will either stand today for the working families who desperately need this help … or the Senate is with private debt collectors, reaching their hands into those families' pockets."

Brown added that the stimulus payments were approved to "support families, to support local economies, not to line the pockets of predatory debt collectors."

Toomey objected to the bill. Under Senate rules, any senator can block a bill from being passed with unanimous consent. Democrats can still bring the bill up for a regular vote, but it could face a Republican filibuster.

Toomey, a retiring Republican moderate who voted to convict former President Trump in his second impeachment trial, criticized Democrats for using the budget reconciliation process in order to justify his opposition.

"It was going to be strictly Democrats using the reconciliation process, and that is the only reason that this provision couldn't be addressed because it can't be dealt with under the reconciliation rules," he said on the Senate floor.

Toomey said that debt collectors were pursuing "valid legal claims," arguing that the legislation would protect "deadbeat dads," and disputed Democratic arguments that workers face an economic crisis, arguing that "lower-income workers' wages are increasing at a greater pace than high-income workers."

"Should we really consider this a crisis?" he asked.

Critics in his state were quick to argue that "comparing 3% wage growth on $7.25 per hour to 2% growth on $90 per hour was not a strong argument," as the Erie Times-News reported.

Toomey also noted that it may be too late to prevent the seizures after the Treasury Department said it has already sent out 90 million payments.

"These payments have already gone out the door," he said. "The garnishment happens automatically. It's already happened."

It's unclear if Democrats will pursue a full vote on the bill, which could take several days. "We will keep trying," Brown told HuffPost.

Pennsylvania Democrats slammed Toomey's objection, citing the hardships his constituents have faced during the pandemic.

"This explains why Pat Toomey is not running for re-election. He's so grossly out of touch," Lt. Gov. John Fetterman, who is running for Toomey's seat, told the Erie Times-News. "The fact that he's on the side of debt collectors after a yearlong pandemic is all you need to know about Pat Toomey," he added. "To give those badly needed checks to debt collectors when people have struggled through the first pandemic in over 100 years is bizarre and warped."

State Rep. Malcolm Kenyatta, a Philadelphia Democrat who is also running for the seat, told the outlet the objection marked a new "low."

"It should be a shock to no one. Pat Toomey never worked for us. He only worked for the people who own him," Kenyatta said, referring to the senator's donors from the financial industry. "He's working for his next job."

Ultimately, the lack of protections before the payments were sent out falls on the majority party.

"We really wish this could have passed before the money started going out," Lauren Saunders, the associate director of the National Consumer Law Center, told CNN. "The protection would have been far more effective if the payment was coded in a way so that banks would automatically know to protect the money."

Centrist Democrats also pushed to shrink the pool of eligible recipients from the Trump-era relief bills, lowering the income cutoff for payments from $100,000 to $80,000, meaning that about 12 million adults who received payments under Trump did not receive any under the terms of President Biden's first major piece of legislation.

Saunders said it was imperative for the Senate to act quickly to prevent debt collectors from seizing the expanded child tax credit payments included the latest bill.

"There is still time to protect the child tax payments that won't start until July," she told WLS-TV, "so we really hope that at least those child tax credits can be protected."