Evangelicals are teaching false doctrine. Who says so? Jesus Christ 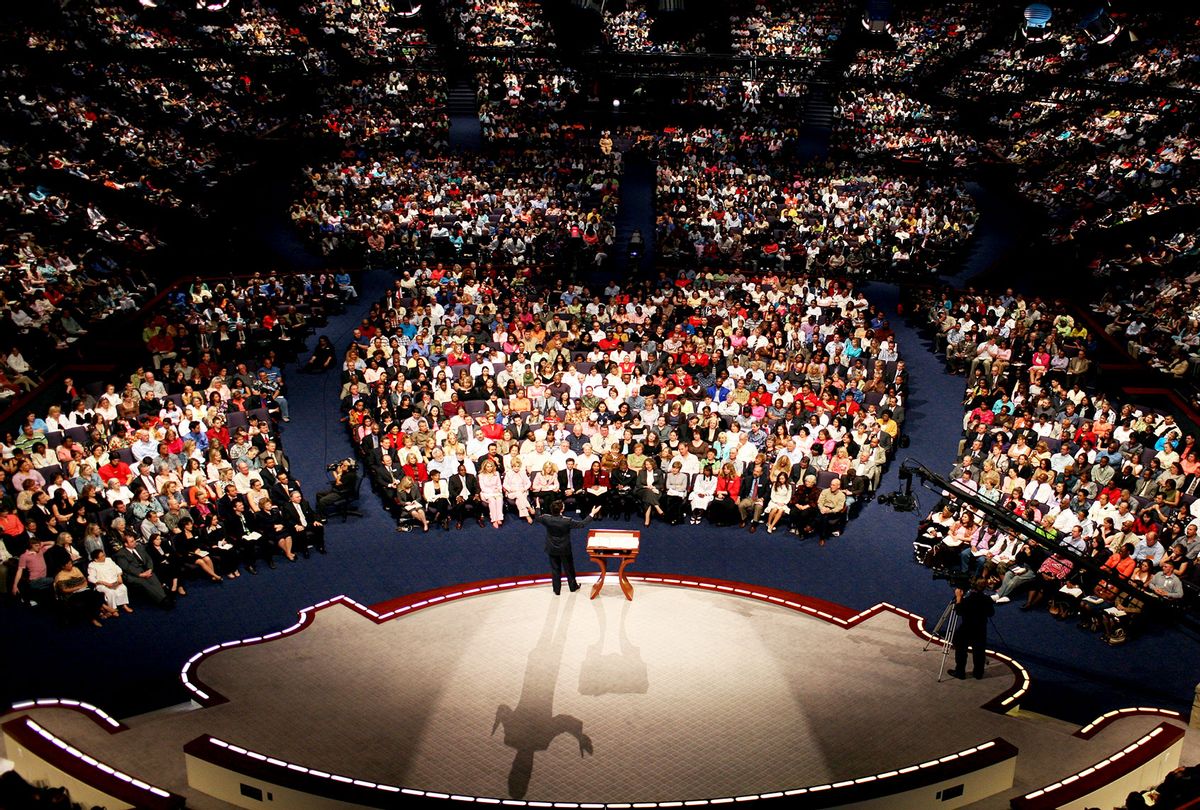 Service at Lakewood Church in Houston, where Pastor Joel Osteen preaches to some 25,000 people each week. (Timothy Fadek/Corbis via Getty Images)
--

I was raised by a pair of wild hippies, so my heart has always been committed to liberal ideology. As a Bible-believing Christian, however, I was surrounded by evangelical theology throughout my youth, in various churches, Bible camps and so on. When I decided to enter the ministry to attempt to change that conservative theology, I attended an evangelical seminary. It was clear on my first day on campus that no reform was going to occur.

If I happened to mention voting for Al Gore, I was told by my classmates that God keeps a record of my voting history and that I had voted for a man who endorses baby-killing and tearing down the American family. Honestly, I was just hoping that President Gore might help save the planet and not make up a reason to go to war in Iraq. Anyway, in my 10 years in ministry I had even less luck making any changes, which is why I left the formal ministry a couple of years ago.

The truth then, and even more so now, is that we cannot separate Republicans, and now the Trumpists, from the evangelicals. I have seen my fellow "Christian left" types attempting to reform the God vote — in fact, I've done it myself — but I feel we have been too timid in our approach. Stronger language and a pure rejection of evangelical theology is needed. From a purely Christian point of view, the evangelical leadership are false teachers teaching a false doctrine. Trumpism cannot be defeated without first facing down evangelicalism. Jesus Christ, who these people claim as their savior, himself provided a warning against these religious hypocrites in Matthew 23:

Woe to you, teachers of the law and Pharisees, you hypocrites! You shut the door of the kingdom of heaven in people's faces. You yourselves do not enter, nor will you let those enter who are trying to.

The only real threat to Christianity is Christianity itself. Leading evangelical pastors like Franklin Graham and Robert Jeffress made a passionate plea for Christian voters to ignore Trump's shortcomings as a man because he stands with the Christian church on all things that are right and true. Apparently, that means Christians must shut the door to all LGBTQ people, abortion providers, liberals, immigrants, Muslims and anyone who happens to mention taxing the wealthy.

Woe to you, teachers of the law and Pharisees, you hypocrites! You travel over land and sea to win a single convert, and when you have succeeded, you make them twice as much a child of hell as you are.

Many of the false American evangelical teachers demonize and look down upon the people in poorer countries. I have seen these "missionaries" in places like Haiti building their churches and making sure "proper doctrine" is followed. It is this type of modern-day colonialism that has provided foreign governments the religious authority to enact terrible anti-LGBTQ laws and restrictions on reproductive rights for women.

Woe to you, blind guides! You say, "If anyone swears by the temple, it means nothing; but anyone who swears by the gold of the temple is bound by that oath." You blind fools! Which is greater: the gold, or the temple that makes the gold sacred?

False teachers have always believed that their financial wealth means favor with God. I have seen many Christian leaders give praise to God for their big homes, nice cars and million-dollar sanctuaries. This belief that God has blessed them with great stuff prevents them from ever understanding the need to fund programs that provide equality in the education, health care, justice and economic systems.

Woe to you, teachers of the law and Pharisees, you hypocrites! You give a tenth of your spices — mint, dill and cumin. But you have neglected the more important matters of the law — justice, mercy and faithfulness. You should have practiced the latter, without neglecting the former. You blind guides! You strain out a gnat but swallow a camel.

These false evangelical leaders may have stayed within the law, but they know nothing about being merciful. They could never understand the message to reach out to undocumented immigrants because of God's call to treat the foreigner as native born — because we were once foreigners ourselves. They only understand the language of rules and law without mercy and grace.

Woe to you, teachers of the law and Pharisees, you hypocrites! You clean the outside of the cup and dish, but inside they are full of greed and self-indulgence.

Many of these false evangelical leaders have spent a lot of time and money making sure their public image is clean. Ideal marriages, wonderful children, kind and loving people who are financially affluent and pay their taxes. Christ reminded his followers to be careful of such a well-crafted persona. Behind the curtain there are many filled with hypocrisy and wickedness.

Woe to you, teachers of the law and Pharisees, you hypocrites! You build tombs for the prophets and decorate the graves of the righteous. And you say, "If we had lived in the days of our ancestors, we would not have taken part with them in shedding the blood of the prophets." So you testify against yourselves that you are the descendants of those who murdered the prophets. Go ahead, then, and complete what your ancestors started!

Many of these current evangelical leaders love to quote Dr. Martin Luther King Jr. and his message of love and forgiveness. Many would like to forget that most conservative Christian leaders rejected Dr. King's message while he was alive, and some believed he was a communist. It is no mystery to me why there is no picture of the great Rev. Billy Graham marching with Dr. King. These false evangelical leaders expose themselves again as they reject the Rev. William J. Barber II's message about honoring and uplifting the poor, which is far more clearly based in Christian doctrine than anything they preach. These false evangelical Christian leaders never understood Dr. King's message to follow Jesus into those places in America where poor people struggle and suffer and too often die, and they never will.