Welcome to the age of Modern Monetary Theory: It's turning conventional economics upside down

Who cares about the deficit? Biden's advisers embrace a hot new economic theory — whether they meant to or not 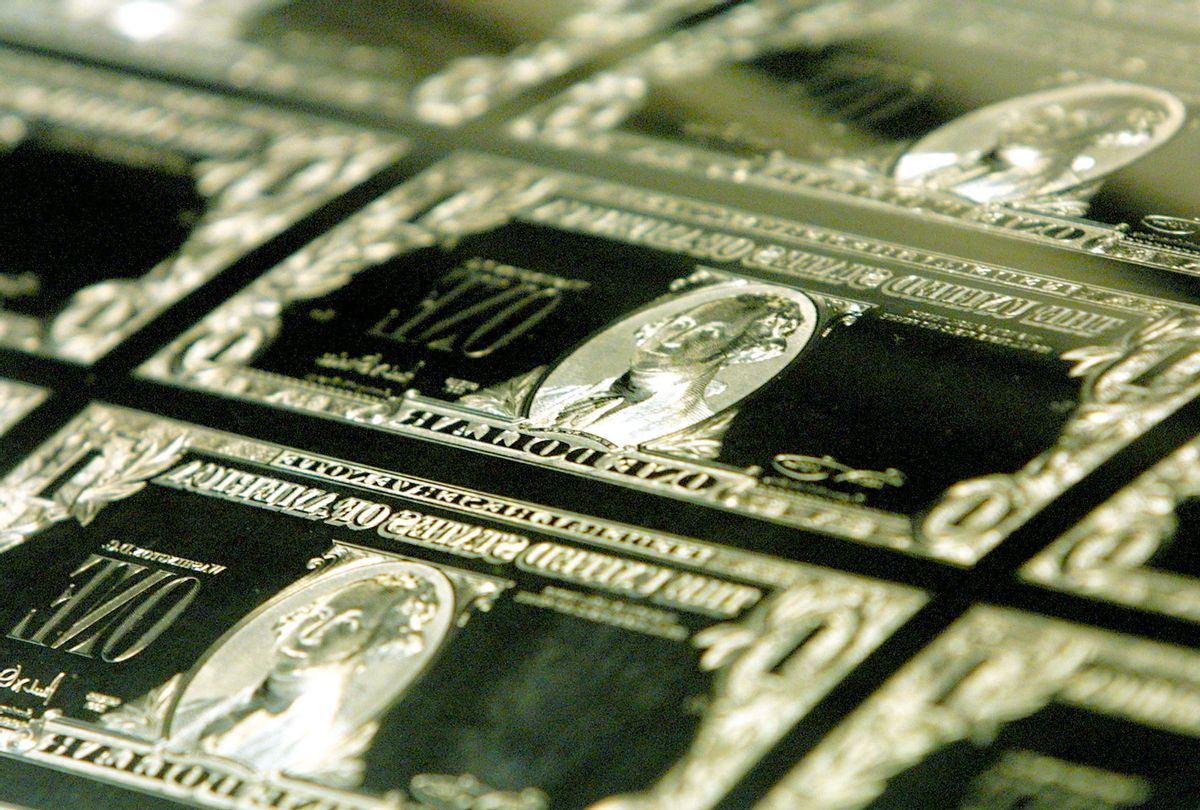 The plates used to print the new Series 2001 one dollar bill notes are stored November 21, 2001 at the Bureau of Engraving and Printing in Washington, DC. The new dollar bills contain the signatures of U.S. Treasury Secretary Paul O''Neill and U.S. Treasurer Rosario Marin. (Alex Wong/Getty Images)
--

Congress has authorized $6 trillion in deficit spending to defeat the coronavirus. That's more than the United States spent fighting World War II, when $4 trillion of government spending released the country from the clutches of the Great Depression.

Naturally, politicians and pundits debate whether the amount is excessive. But implicit in their seemingly routine deficit debate is a remarkable shift: Inflation has replaced debt — the old stalking horse for defeating progressive legislation — as the primary concern with deficit spending.

It's a subtle change, with profound consequences. And it augurs the rise of a revolutionary approach to political economy, Modern Monetary Theory (MMT), as the dominant paradigm in the politics of money.

Like Keynesians of yesteryear, Modern Monetary Theorists urge government to achieve full employment through fiscal policy, even when it requires deficit spending. Their comfort with large deficits emerges from an understanding that an obsession with national debt is a relic of another time, the age of gold standards and fixed currency arrangements. Today, in the age of national monetary sovereignty and free-floating currencies, countries like the United States can fulfill all financial obligations with a simple keystroke.

Still, MMT economists don't exactly scoff at deficits. Their point is that inflation, rather than rising national debt, is the best indicator of whether deficits are too large. Short of extreme inflation, MMT encourages policymakers to juice the economy through government spending. Seen through MMT goggles, a tenet of economic orthodoxy is flipped on its head: Deficits appear as virtuous public investments, while surpluses become scourges, condemned for sucking money out of the economy.

In this brave new world, the refusal of monetary sovereigns to run substantial deficits seems cruel and inefficient. According to MMT economist Stephanie Kelton, deficit spending can and should continue while additional spending can be absorbed by an economy's productive resources. When overspending does cause inflation, the MMT remedy is to remove money from circulation through progressive taxation, rather than by reducing spending and sacrificing the poor to unemployment.

To be clear, there are legitimate critiques of MMT, even among left-leaning economists. Yet judging by the ascent of previous economic paradigms, consensus among economists is not prerequisite in the rise to power of new theories. Historically, the critical requirement for an economic theory to become paradigmatic — meaning, to leap from the ivory tower to the halls of power — is that it simultaneously responds to economic crises and meets urgent political needs.

The work of John Maynard Keynes entered amid the economic crisis of the Great Depression and met the political demands of Roosevelt's New Deal. Later, as Keynesianism faltered in the 1970s, the monetarism of Milton Friedman and the fiscal policy of Arthur Laffer met the crisis of runaway inflation and provided economic legitimacy to the political agenda of the Reagan era.

Good policy or not, MMT enters during a similar moment of economic crisis and political need. It legitimizes large deficits that soften the economic disaster wrought by COVID-19 and it meets the ambitious political agenda of the Biden administration.

Ironically, the path to MMT was opened during the Trump administration. The terrain of deficit debates shifted when — in response to Congressional Budget Office projections of trillion-dollar deficits from Trump's tax plan — conservatives began to hint that maybe concern over debt was overblown.

Then the global pandemic hit. Trump spent trillions. Biden spent trillions. The national debt surpassed $28 trillion. And last week the Congressional Budget Office projected a doubling of the debt before 2051.

All this as the Biden administration prepares its multi-trillion-dollar infrastructure proposal and its plans to make various anti-poverty stipulations of the stimulus bill into permanent programs.

President Biden's economic team may not have arrived in D.C. as MMT acolytes, but they will leave as its greatest practitioners. They don't have a choice.

Deficits will not disappear by repealing Trump's tax cuts. Neither will a path to budget surplus be blazed by Treasury Secretary Janet Yellen's proposed global minimum tax. Even a wealth tax is not certain to rid the country of deficits, much less retire the debt.

Deficit spending is here to stay. Passing transformative legislation requires that Democrats finally become unafraid of debt. For 40 years, conservatives have raised the specter of national debt to stifle progressive ambitions. Milton Friedman famously advised that President Reagan's 1981 tax cut couldn't fail. After all, if the cuts didn't pay for themselves, they would create a national debt so large that expanding liberal government programs would become politically impossible.

Friedman was right — and an entire generation of Democrats were caught in his trap, unable to expand safety net programs, and often failing even to maintain them. Modern Monetary Theory gives Biden an opportunity to break free from the Reagan-era debt trap. You can bet he'll take it.

Andrew Kordik is a history teacher and a union representative. He is also a student of political economy and labor policy at Harvard University’s Kennedy School of Government.