Why Biden’s climate agenda might be very, very "quiet"

The best clean energy bill could be the one you'll never hear about. 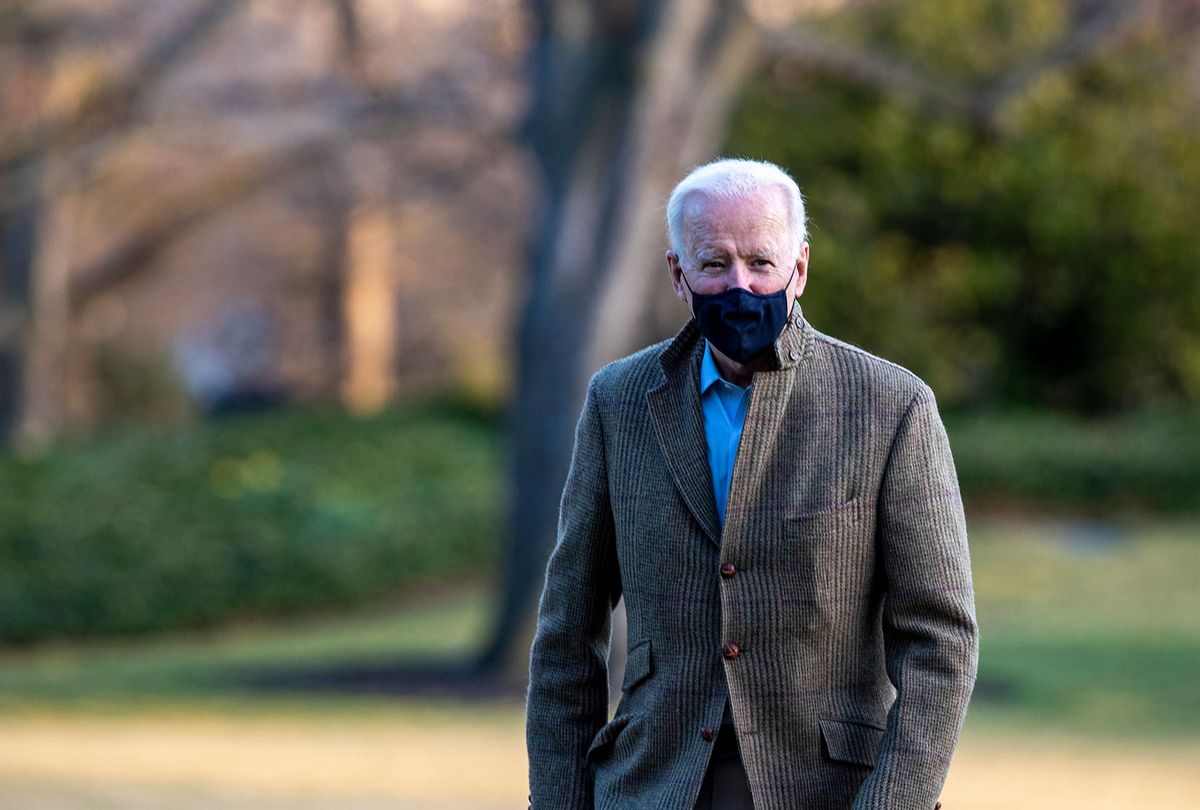 U.S. President Joe Biden stops to talk to the media after stepping off Marine One on the South Lawn of the White House on March 14, 2021 in Washington, DC. President Biden and First Lady Dr. Jill Biden were traveling from Wilmington, Delaware, where they spent the weekend with family and friends. (Tasos Katopodis/Getty Images)
--

The United States made its last, best attempt to pass a comprehensive climate plan 12 years ago. The bill, known in Congress as the Waxman-Markey Act, was big, splashy, and controversial. It included a nationwide cap on carbon dioxide emissions, restrictions on coal plants, and $190 billion in clean energy spending. For some Americans and oil lobbyists, it was sure to lead to higher fuel prices and lost jobs. For others, it looked like the last chance to avoid increasingly dangerous levels of global warming.

Waxman-Markey is now seen as an object lesson in the problems with giant, well-publicized legislation. The bill died, only narrowly passing in the House and never reaching a Senate vote. And it was the start in a long string of failures to curb carbon pollution across the country: President Barack Obama's follow-up, the Clean Power Plan, got tangled up in the courts and was never implemented. Statewide proposals for prices on CO2 in Washington and Oregon were shot down by those worried about rising energy costs.

Now, with President Joe Biden — who has said that "we can, and we will, deal with climate change" — in the White House, and his fellow Democrats in control of Congress, the country is poised to try again. But this time lawmakers and policy experts have a new idea about the best way to shepherd the U.S. into a new, greener era. It's not big or splashy, not a sweeping, nationwide carbon tax, or a giant, economy-transforming Green New Deal. It's "quiet climate policy" and, in the post-COVID-19 era — with Congress planning a package to revamp the country's decrepit infrastructure — it just might work.

Too boring to be polarizing

The idea behind "quiet" climate policy is simple, if a bit counterintuitive. To save the climate, the thinking goes, the U.S. doesn't need a gigantic bill that tries to do everything at once. Instead, cutting emissions will require hundreds of tiny interventions, tucked into bigger Congressional bills or into departmental spending. No fanfare, little media attention. Shhhh.

"The 'quiet' approach is doing climate action through investment in infrastructure, technology, and innovation," said Alex Trembath, deputy director of the Breakthrough Institute, which recently released a report on the idea. In practical terms, that means giving tax credits to developers of wind and solar energy, installing EV chargers across the country, and investing in research to capture carbon and store it underground.

It's not particularly sexy, or particularly interesting. And that's the whole point. "Lack of public attention is a feature, not a bug," Trembath explained.

Big, flashy bills are more likely to polarize an already polarized nation — and then crumple under the weight of disagreement. Matt Grossmann, a professor of political science at Michigan State University, argues that bills introduced with a lot of fanfare provoke immediate opposition and media attention — which, ironically, makes them more difficult to get through Congress.

"When the media is talking a lot about a bill, the public tends to learn things they don't like," Grossmann said.

The Affordable Care Act, for example, was so polarizing that it continues to attract controversy more than a decade after its passage. The legislation — which protected Americans with pre-existing conditions and cut the number of uninsured by an estimated 21 million — passed the House in 2010 without a single Republican vote, and has been under conservative attack in the courts ever since. (The Supreme Court is expected to rule on whether one of the law's key components, the "individual mandate" for Americans to have health insurance, in June.)

Legislation that flies under the radar, on the other hand, can avoid both public scrutiny and political posturing. It's hard for even the staunchest climate denier to get riled up about the 45Q tax credit— a $50 tax break for each ton of carbon captured and stored underground — or a Department of Energy program to close up drafty homes. "A lot of actions that have big climate benefits get disarmed" under quiet climate policy, said Josh Freed, senior vice president for climate and energy at the think tank Third Way. "They're not barbed enough for Sean Hannity or Tucker Carlson to be able to scream and get eyeballs on."

And, crucially, this strategy seems to have worked in the past. U.S. emissions have fallen almost 12 percent since 2005, not because of legislated federal limits on greenhouse gases (there haven't been any) but because of the shift from coal to natural gas, along with the growth of renewable power spurred by Obama's 2009 Recovery Act.

There have already been a few examples of Congress approving "quieter" climate policy in the past year — even with Republicans in charge of the Senate and President Trump in the White House. In December, a climate package hitched a ride on the giant omnibus spending bill, which authorized $35 billion in clean energy spending and set limits on emissions of hydrofluorocarbons, so-called "super greenhouse gases." Earlier this month, Biden signed the $1.9 trillion coronavirus relief package, which included $30.5 billion for public transit and another $100 million for tracking air pollution and cleaning up environmental toxins.

And while climate and energy experts might have noticed this happening, most average Americans — and political pundits — did not. "These things sort of sneak into omnibus legislation and reauthorization packages that no one really pays attention to," Trembath said.

The other advantage is that for the average American or corporation, "quiet" policy seems to provide more benefits than costs. Most political scientists and economists have long thought that the U.S. needs two forms of policies to cut emissions: boosting spending for clean energy (the carrot), and putting strict limits on CO2 spewed into the atmosphere (the stick). But the stick is … unpopular. Steep carbon and fuel taxes have faced heavy backlash in recent years — consider France's 2018 "yellow vest" protests — putting them at risk of reversal once power changes hands.

Incentives are another story. Once funding green energy is started, it's hard for future administrations to reverse it. Upon entering the White House, President Trump tried to slash fundingfor efficiency and other green programs in the Department of Energy, only to be stymied by members of Congress and clean energy groups. Freed says this is an example of what has been called "the green spiral": If the government creates a program to, say, benefit developers of solar farms, it creates a constituency of solar companies which defend the benefits and lobby for even more federal support.

"Entire communities have seen their livelihoods, their tax base, really benefiting from the switch over to clean energy," said Freed. "They want to see those investments protected."

Lawmakers can also target funding to a particular region — simultaneously pleasing their own voters and avoiding public attention. (Nationally, no one is likely to care if a western Pennsylvania town gets funding to build a new carbon capture storage plant.) That may become even easier in the next Congress, as both Democrats and Republicans are planning to bring back "earmarks," or projects slipped into big bills without being subject to a direct vote. This practice has been banned for almost a decade — and criticized for being a way to add "pork" to legislation — but it can help hold a party together on crucial votes.

The biggest test of this new trend, however, may be yet to come. Just weeks after passing the massive, $1.9 trillion coronavirus relief package, the Biden administration has turned its attention to assembling another multi-trillion dollar bill — this time, focused on infrastructure. The package could include hundreds of billions of dollars to take on climate change — boosting electric vehicle charging, building a federal "green bank," and retrofitting buildings to save energy. (Some have even suggested that the package could include some form of a "stick": a requirement for utilities to produce energy from clean sources by 2035.)

The problem is that if enough dollars are on the table, even the quietest policy can start to sound … uncomfortably loud. Obama's 2009 Recovery Act was, in a way, the original attempt to quietly fund clean energy. It passed with $90 billion to boost wind, solar, nuclear, and energy efficiency — all carefully tucked into an $800 billion economic rescue package. But after the solar panel company Solyndra defaulted on a $535 million loan, the clean energy aspects of the bill became a talking point for right-wing media.

Of course, in the COVID-19 era, $90 billion looks like small potatoes. A $1 trillion aid package once seemed unthinkable; during the pandemic, one seems to pass every few months. Even so, as price tags for the infrastructure package reach into the hundred billions, and federal debt nearing $27 trillion, lawmakers (and the public) could start getting skittish.

"If all the 'quiet' parts of climate policy are assembled into a big enough package, does it cross the line into loud policy?" Freed said. "We're hopeful that it doesn't. But that's what we're going to find out."