How dissent gets criminalized: America's right to insult the government is under attack

Our rights to open, even crude, dissent are relatively recent—and vulnerable to legislative and judicial crackdowns 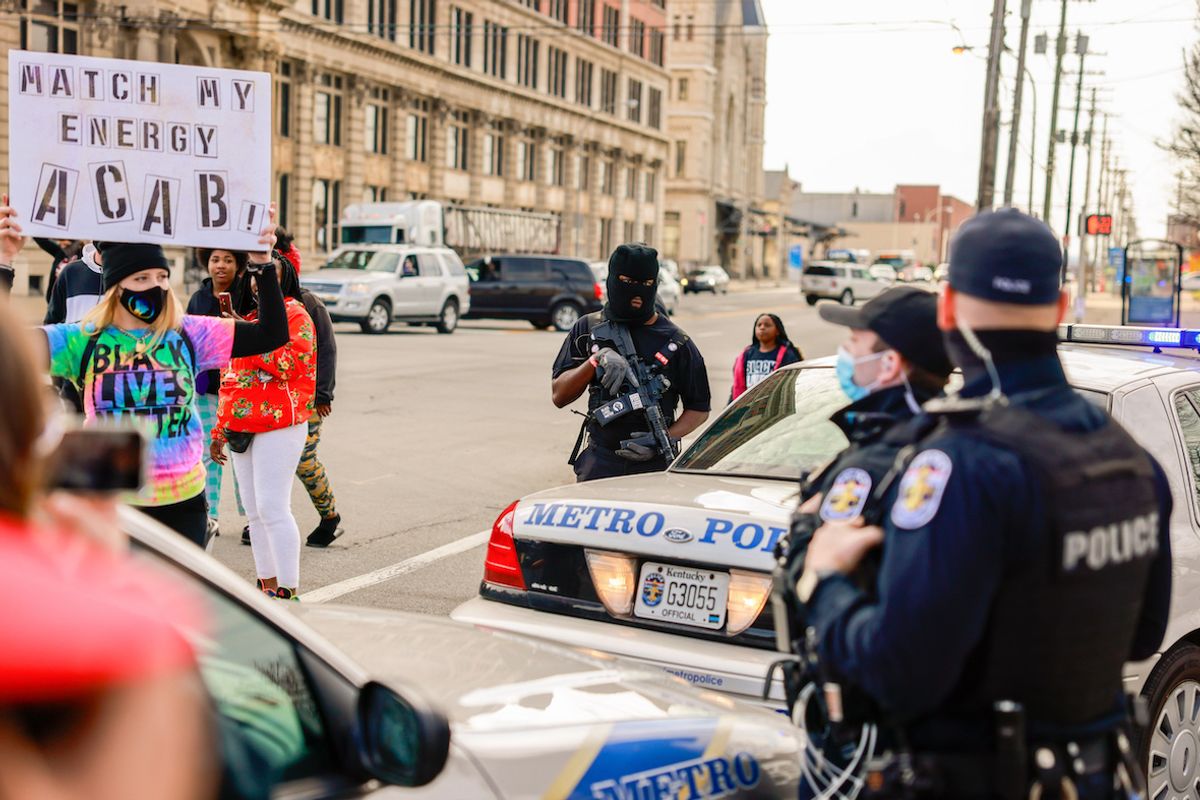 A protester holding a placard expressing her opinion in front of police during a memorial march to mark the one year anniversary since the Louisville Metro Police Department shot and killed Breonna Taylor at her home in Louisville. (Jeremy Hogan/SOPA Images/LightRocket via Getty Images)
--

We shouldn't have to repeat this: Americans have the right to insult those in charge, from President Biden to a local councilman, and, yes, even an armed policeman. Yet this bedrock right to vent our spleens against officials is now being challenged. A federal appeals court judge on Friday echoed Supreme Court Justice Clarence Thomas in calling for the reversal of New York Times v. Sullivan—the landmark decision permitting "vehement, caustic and … unpleasantly sharp attacks" on government officials. And a year after the protests in Louisville in response to the police killing of Breonna Taylor, Kentucky's senate approved a law criminalizing insults to the police.

If the Kentucky statute makes into law, police could arrest anyone who hurls "offensive or derisive" words at them that tend "to provoke a violent response" from a reasonable person. In other words, cops—who are supposed to de-escalate conflicts, not make them worse—would be invited to throw protestors into the paddy wagon in response to words that anger them. Even if a court later rules the cops were wrong, the voices of dissent would still be silenced.

The statute is so vague and overbroad that it would likely not survive a constitutional challenge, and the attacks on Sullivan are for now confined to dissenting opinions. But historically speaking, these measures are anything but aberrations. In fact, they reveal a key underpinning of centuries of political censorship: Power is fragile, resting on a thin veneer of infallibility as much as force, and authorities often feel compelled to suppress anything that may crack that illusion. The Louisville police can bust into a young woman's home and kill her without being charged, but despite that overwhelming firepower they still need protection against mere words.

Why the vulnerability? Because "authority requires a mask," as the sociologist F.G. Bailey puts it, to conceal its failings and shield it from contempt. This Niccolò Machiavelli knew when he counseled his prince to guard his grandeur above all else. Even autocratic power requires a measure of popular faith, and all faith is brittle and fleeting. By 1704, England's lord chief justice pronounced that "no government can be safe" unless those who cause people to have an "ill opinion" of it are punished.

Machiavelli wrote "The Prince" in 1532, just as censorship laws were appearing everywhere to halt the printing press's metastatic spread of seditious ideas. His contemporary, Henry VIII of England, took matters to extremes, imposing harsh controls on printing and executing people for treason when they so much as "imagined" his death or uttered words that deprived him of his "dignity." It got so bad that his doctors were afraid to declare him ill, lest that lead them to the executioner.

But England's (and, for a time, the United States') main weapon against dissent was the doctrine of seditious libel, which allowed whipping, mutilation and imprisonment for speech that could lower the public's esteem for the government, even — or especially — when it was true. The idea was that authorities were to be revered as well as obeyed: Criticism violated God's plan for a well-ordered society. The quasi-religious overtones of seditious libel appeared in a famous 1735 New York case against the newspaperman John Peter Zenger, who criticized the colonial governor. The prosecutor invoked St. Paul's teaching that speaking against the state offended God, "for it is written, thou shalt not speak evil of the ruler of the People."

Zenger managed to beat the rap, but a Pennsylvania man with the temerity in 1723 to state that King had no authority over him was fined, pilloried, paraded around while tied to a cart, whipped and imprisoned until the fine was paid. As the scholar Leonard Levy observed, "A sentence like that did not have to be repeated to have a lingering, cautionary effect on the tongues of citizens."

The 1791 ratification of the First Amendment did nothing to stop seditious libel in the young United States. Just seven years later, Congress passed the Sedition Act, which made most dissident speech a federal crime — from the writings of a congressman to a drunkard jailed for his expressed wish that a cannonball flying overhead land in President John Adams's backside.

By 1964, when the Supreme Court decided Sullivan, seditious libel looked like it had become a dead letter. The Court declared that the Sedition Act had been invalidated by the "court of history," and later decisions expanded the right to criticize government. Yet some state laws have kept the concept alive, or, like zombies, not entirely dead. About half the states still have "criminal libel" statutes on the books, and about 20 prosecutions are brought each year.

A New Hampshire man was arrested in 2018 for writing on Facebook that a policeman who gave him a traffic citation was "dirty" and the local police chief "covered up" the matter, while in 2010 a Kansas man was charged after he put a sign on his lawn accusing a town administrator of ignoring a water drainage problem.

Utah's similar law was struck down after a 16-year-old boy was arrested for calling his high school a "town drunk," and each of the other state laws should be as well. But specific laws are not always required to squelch speech, especially when it concerns police. In 2018, a South Carolina police union challenged the inclusion on a school's reading list of the award-winning novel, "The Hate U Give," about police brutality. The union claimed the book is "almost an indoctrination of distrust of police." The book was banned in several places.

If it goes into law, the Kentucky statue against insulting police should be struck down by the courts, but then again it may not be. Crazier things have happened. In any event, the very possibility of such a law, and the judicial rumblings against Sullivan, are reminders that our rights to open, even crude, dissent are relatively recent, and are as vulnerable as the tender sensibilities of Louisville's riot police. This is no time to criminalize speech.