What will it take for farmers to grow more organic cotton? 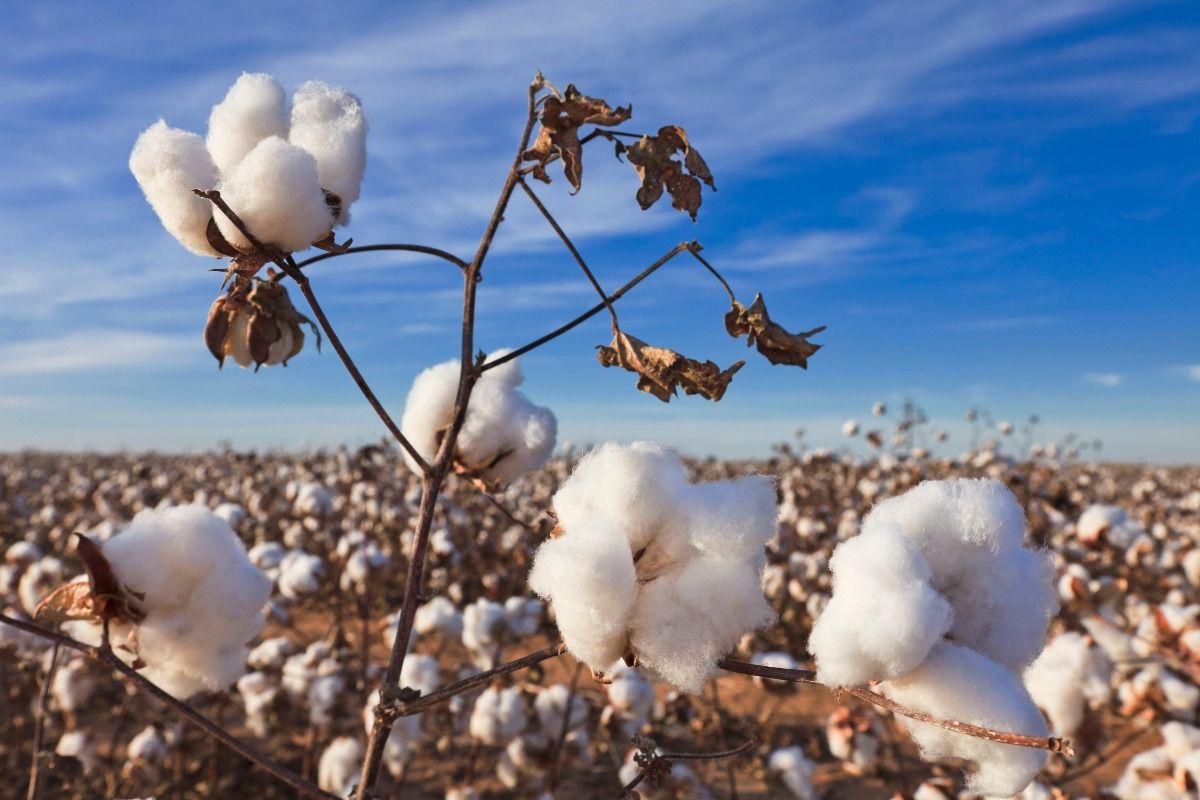 For years, organic cotton was a tough sell for the average American consumer. The consumers who did opt to pay extra for organic products tended to prioritize food, and the markup on cotton just didn't seem worth it.

"The first concern of people, and why they gravitate toward organic, is because they are usually putting it in their mouths," says Kathleen Delate, an Iowa State University professor and organic specialist.

But that's all finally changing, says Delate, who joined two other researchers to produce a new study in conjunction with The Organic Center looking at the environmental impact of organic cotton compared to its conventional counterpart. The change stems in part because consumers are increasingly interested in ecosystem health across the entire commodity chain. A 2019 survey conducted by Nielsen found that 73% of global consumers said they would be willing to adjust their consumption habits to reduce their environmental footprint with nearly half saying they'd pay more for products containing organic or all-natural ingredients.

This shift has spurred demand for organic textiles, which have seen a 12% annual growth rate in recent years. In fact, according to the Organic Trade Association (OTA), organic cotton is the largest and fastest-growing organic commodity in the American marketplace that's not a food, netting $2 billion in sales in 2019 alone.

That is a drop in the bucket compared to conventional cotton production — the world's most popular natural fiber — where in 2019 alone, nearly 20 million bales of the crop were produced on American soil, accounting for $7 billion in global value. That's a lot, considering that one bale makes more than 1,200 t-shirts.

And yet, Delate and her peers' new research confirmed what many have long suspected: organic production results in remarkably less environmental degradation — in a sector highly dependent on genetically engineered seed and chemical inputs.

For Jessica Shade, director of science programs at The Organic Center and one of the report's authors, the hope is to spur much-needed innovation in the industry. "It is incumbent upon universities, NGOs, and industry groups to work together toward the goal of creating an organic cotton sector steeped in the principles of ecology, health, fairness, and care," the authors write in their report.

Cotton production in the U.S. centers on 17 warm southern states, with Texas leading the pack as the largest cotton producer. The Lone Star state is also the heart of the fledgling organic cotton industry in the U.S.

Conventionally grown cotton is not only one of the most traded crops on the planet — supplying billons of clothing and other various textile products each year—but it is also one of the most chemically intensive crops to produce. In the U.S., cotton ranks third after corn and soybeans as the crop that requires the most pesticides in its production. In 2019, more than 68 million pounds of pesticide were applied to cotton fields across the U.S. alone. Additionally, most conventional cotton farmers plant genetically engineered seed, resulting in higher chemical application and the engineering of more robust products that have known environmental and human health impacts. Glyphosate, the active ingredient in the widely used herbicide Roundup, made up more than one third of all pesticide use on cotton in 2019 according to the USDA. The study reads:

The U.S. Environmental Protection Agency (EPA) approved new GMO cotton varieties, Xtend and Enlist, which are each resistant to three herbicides: glyphosate, glufosinate, and dicamba, and glyphosate, glufosinate, and 2,4-D, respectively. These new GMO varieties are expected to replace the traditional Roundup Ready cotton and are anticipated to increase the amounts of these chemicals used in conventional cotton production.

The researchers examined the environmental benefits of organic cotton using a survey of more than 100 growers and processors — most of whom reside in Texas. The researchers also sought information on the agronomic, manufacturing, and market challenges facing producers.

According to Shade, there has been little research to date looking at the environmental impacts of organic cotton on a large scale. More importantly, none of the research available has actively involved input from the nation's small-scale organic cotton-producing community, Shade says.

"We wanted to do something that would look a little bit deeper and incorporate farmer and processor experiences in addition to the more academic knowledge that we have about the environmental impacts of organic cotton," Shade notes. She says a lot of growers commented on perceivable improvements in things like soil quality and increased biodiversity on their farms since transitioning to organic.

Survey respondents cited weed management as their biggest obstacle in growing organic cotton. As Kelly Pepper, the manager of the Texas Organic Cotton Marketing Cooperative (TOCMC), attests, most organic cotton operations average 1,000 acres — which is mammoth compared to their counterparts in other organic industries — and organic management of weeds over this large terrain can be complicated. Cotton is a slow-growing crop that takes 150 to 180 days to come to maturation, giving weeds an ample opportunity to grow.

These rotations mean more biodiversity, says Delate. As a result, organic farms contribute a range of ecosystem services to the regions where they are located. This approach has real and tangible impacts on soil, waterways, and human and animal health, the researcher said.

"There are higher carbon sequestration benefits with organic production in general," Delate added. "Organic systems have always used cover crops and there are a plethora of options — rye, vetch, clovers. Cover crops add carbon — and some folks use compost and manure too, which adds to the carbon profile of the soil."

Cotton also requires intensive water use. However, based on the researchers' findings, organic growers appear to use less. According to the Textile Exchange, global cotton production comprises 69% of the textile industry's water footprint. Meanwhile, organic cotton production reduces water consumption by as much as 91%. Many organic producers forgo irrigation — one study found that 80% of organic cotton production globally relies on rainfed systems — and they foster healthier soil that contains a higher percentage of organic matter, which does a better job of holding in moisture.

Beyond the farm, organic certification in the cotton industry extends to the ban on environmentally harmful chemicals at other points in the production process. This step safeguards the health of handlers and makers at further points in the value chain. Specifically, to be certified organic, the product must be free of chlorine bleach, dyes containing heavy metals, ammonia, and formaldehyde, as well as a slew of other hazardous inputs that are used in conventional cotton processing. Water is also saved in organic production processing compared to conventional production, which is generally dependent on large amounts of water for dyeing and finishing.

From farm to fashion

"Cotton is a very difficult crop to grow organically," Pepper of TOCMC says.

Pepper used to farm more than 1,000 acres of organic upland cotton alongside his brother in the High Plains region of Texas, a fertile zone where more than 60% of the state's cotton crop is seeded and harvested. Now, he helps more than three-dozen farmers affiliated with TOCMC find markets for their harvests from nearly 20,000 acres of combined cropland.

Despite the many challenges of growing cotton organically, Pepper also recognizes the crop's potential. "Demand has gone absolutely crazy," he says. "We've been turning away new business."

However, the American market still favors conventional growers. "As long as conventional cotton is significantly cheaper in general it is hard for organic growers to compete," Pepper says about current volatility in the sector. Building in more flexibility with products that blend organic and conventional cotton or permit cotton from farmers still in the three-year transition to organic would aid growers in expanding, he adds.

"The best way for there to be significant growth would be for large brands — and some of them have done this in the past—to have a program where they blend organic or transitional cotton with regular cotton," Pepper says. "If they would come to farmers with a commitment to buy a certain number of pounds knowing that weather and other impacts may limit the amount available, but if the agreement is open-ended and has an attractive price, there is potential for growth."

Patagonia offers a version of this with the "Cotton in Conversion" product line it launched last year. "Our support of this crop rewards the efforts of farmers who are committed to reaching organic cotton certification and helps them stay on the path to organic" the brand notes on its website. Other clothing brands, ranging from giants like Nike to small ones like Everlane, also have various commitments to organic production in their product lines.

"We need pioneer brands who will create an incentive for farmers to transition," says Angela Wartes-Kahl, vice chair of the OTA's Fiber Council. "It's unfair to put everything on the farmer," she adds while explaining that contracts from industry buyers are the structure needed to incentivize organic cotton's expansion.

Jesse Daystar, chief sustainability officer for industry association Cotton Incorporated, doesn't see a sole focus on organic as the only answer. "While organic cotton production is key to many brand sourcing strategies, relying on organic production alone is problematic for many reasons," Daystar told Civil Eats via email. "First, cotton is purchased based upon its fiber quality, rather than by production system or geography. It could be challenging, especially for large brands, to source sufficient quantities of specific qualities of organic cotton for their apparel."

Daystar says the support of other industry-specific tools such as the recently launched U.S. Cotton Trust Protocol, managed by his own company with the National Cotton Council among others, is one key to growing sustainability in the sector. The Protocol brands itself as "setting a new standard for more sustainably grown cotton" and claims to vet the fiber using metrics on land and water use, soil carbon and soil loss, as well as energy efficiency.

"Scaling up organic cotton production to meet the industry preferred fiber needs would be challenging, if not impossible, within the timelines set forth by many brands and organizations," Daystar said. He wants to see sustainable fiber production take a "both and" mentality that includes both organic production and stricter standards for conventional cotton under the U.S. Cotton Trust Protocol.

The authors of the new study say the heart of their effort focuses on pushing industry partners to pursue deeper agronomic and market research to aid the sector. One effort that Delate says could be monumental is support for seed programs, like those at Texas A&M University, which aim to develop and make higher-yielding organic seed stock more widely available. The research institution houses the only program on organic cotton seed in the U.S.

Meanwhile, at Iowa State — where Delate works — there are two research programs devoted to organic corn seed stock amongst a range of other academic institutions and private sector labs working on the topic. "[Organic] needs a lot more research power," Delate says.

Shade calls the report a "scaffolding" for growth in the fledgling organic cotton sector. "There's been a lot of research on organics in general but cotton has gotten left behind," she adds. But, she adds that "there's economic opportunity and, as the tools develop, hopefully they can really help people overcome barriers in transitioning from conventional."