How to smoke a brisket (plus, a pitmaster-approved shortcut) 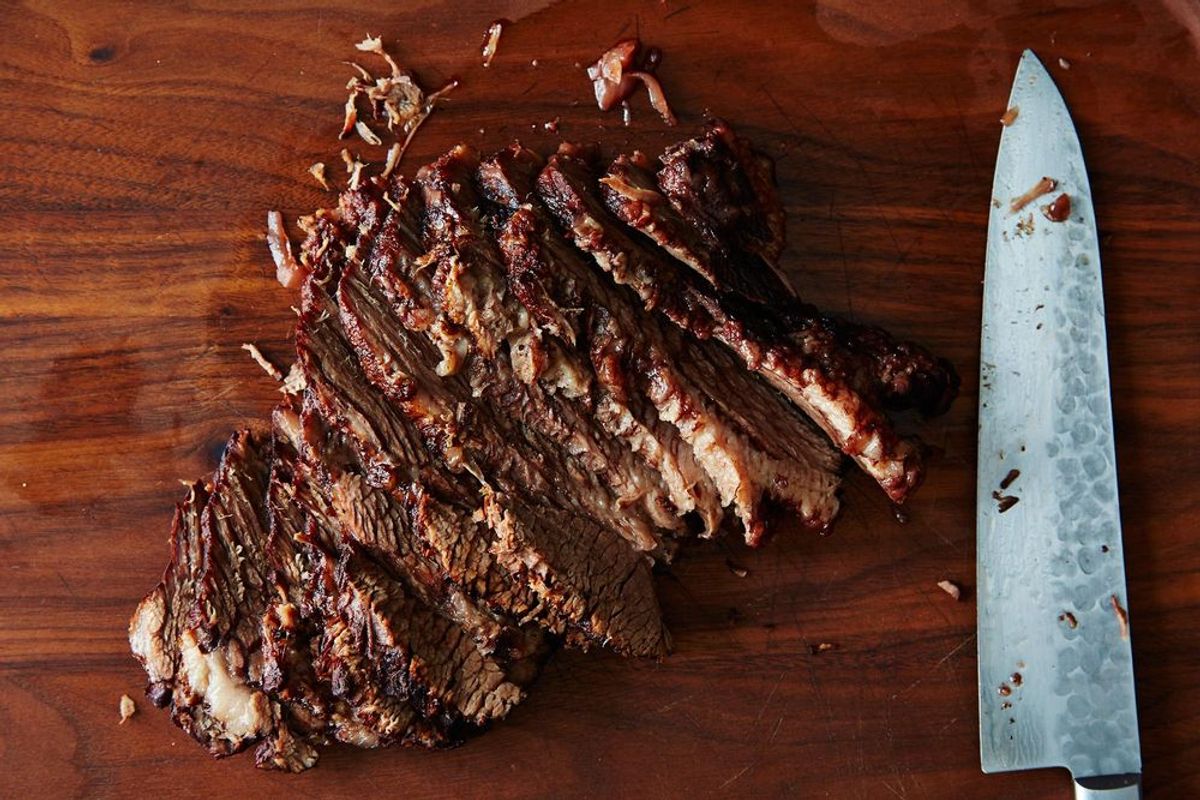 In my hometown of Austin, it's hard to escape the wafting aroma of Central Texas Barbecue. Yes, that means there's tender brisket and spicy smoked sausage links at every turn, but it's way more fun to make your own. If you've got the time (half a day, but you can keep busy with stuff while the meat smokes), a well-marbled beef brisket, and a couple bags of lump charcoal and wood chunks, you can part-time pitmaster your way to tender smoked meat.

My cookbooks are devoted to firing up dinner quickly and seasoning foods with a whiff of wood smoke in as little as 20 to 30 minutes. But every now and then, when a sunny weekend calls for quality time with my trusty grill and barbecue and all the fixings, only slow-smoked brisket will suffice.

I learned the following method from Aaron Franklin, our good friend, legendary brisket whisperer, and the acclaimed pitmaster behind Franklin Barbecue. When I first started smoking larger cuts like brisket, I didn't want to screw it up — so I took advantage of having Aaron on speed dial, sent him too many photo updates, and offered cold beer for his honest feedback. His response that I still cherish? "This doesn't suck."

I typically follow Aaron's purist approach of using quality meat seasoned with kosher salt and black pepper. But playing with rubs is a fun and easy way to mix up the flavor profile. For a full-on Central Texas experience, serve slices of the smoky, salty meat with coleslaw, potato salad, and pinto beans — and pass the hot sauce. 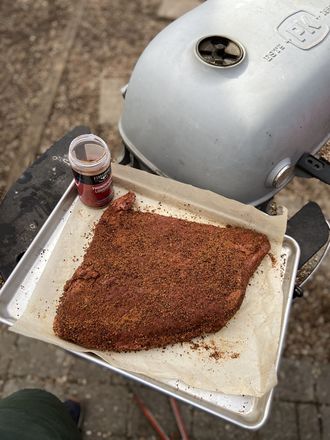 An hour before preparing the grill, place brisket on a rimmed baking sheet. Mix salt and pepper in a small bowl and season the meat all over (it should look like sand stuck to wet skin, without being cakey). Let meat sit at room temperature for 1 hour.

Light a full chimney of charcoal and let it burn until you see flames rising from the top, then pour the coals onto one side of the grill. Wipe the preheated grates with a lightly oiled paper towel. Using a grill brush, scrape the grill grates clean, then carefully wipe with a lightly oiled towel again.

Place 3 chunks of wood around the periphery (not on top of) the fire. (You want the wood to catch slowly and smolder. Placing them on top of the coals will cause them to burn too quickly.) Place the brisket over indirect heat (the side with no coals), close grill and vent for smoking. (If you're using a round kettle-style grill, position the vent on lid as far from heat source as possible. This helps draw the smoke up and over the meat as it rises). Stick thermometer through top vent. Heat until thermometer registers 225 to 250°F, adjusting vents on bottom and top of grill as needed to maintain temperature.

Adjust vents as needed to control temperature. Check coals and hardwood about every 45 minutes. (Try to open lid as little as possible; check and replenish coals and hardwood at the same time.) For the coals, once you have checked them and decided to add more (they've burned down enough that you'll need more to keep your fire going and maintain your grill temperature), fill a chimney halfway with coals, then add coals to grill once they're covered with a thin layer of ash. If you control the heat well, you shouldn't need more than 4 to 6 chimneyfuls of coals to cook the brisket (2 to 4 chimneyfuls if finishing brisket in the oven). When checking hardwood, move it around to a hotter spot if needed, or replenish extinguished chunks to maintain a steady stream of smoke. 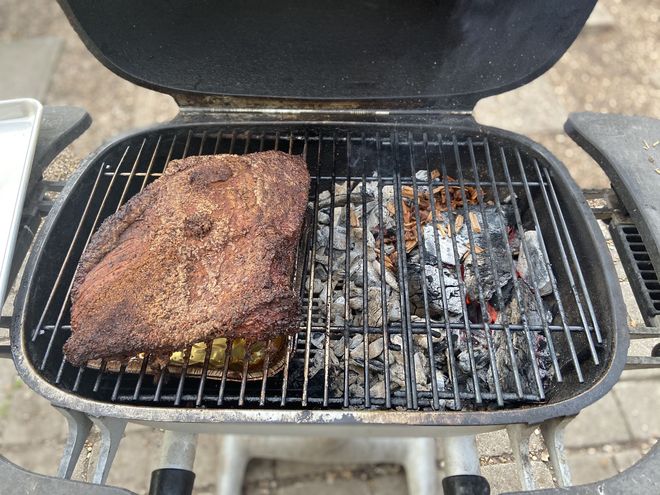 The brisket, two hours in. Photo by Paula Disbrowe.

Know when it's done

Keep smoking the brisket, rotating every 3 hours and flipping as needed if top or bottom is coloring faster than the other side, until meat is very tender but not falling apart and an instant-read thermometer inserted into the thickest part of meat registers 195 to 205°F, about 10 to 12 hours total.

If you just don't want to spend your whole day at the grill, here's a fail-safe Aaron Franklin-endorsed alternate method that will deliver similarly glorious results: Smoke brisket on grill until an instant-read thermometer inserted into the thickest part of meat registers 150 to 170°F, about 5 to 6 hours. Double wrap the brisket in butcher paper or foil, place on a baking sheet, and cook in a 250°F oven until meat reaches the same 195 to 205°F internal temperature, 4 to 6 hours longer. What's important is getting that smoky flavor into the meat, and 5 to 6 hours on the grill should do it. After that point, you're simply getting the meat cooked through.

Transfer brisket to a carving board and let rest at least 30 minutes. Slice brisket against the grain into 1/4-inch thick slices and serve.

Brisket is best shortly off the grill, but you can still get good results smoking it up to 3 days ahead. Let cool for an hour before wrapping in foil and chilling. To serve, reheat meat, still wrapped, in a 325°F oven until warmed through.

What to wat with brisket

Now that you've got your brisket smoked, it's time to turn your kitchen into a full-blown barbecue joint. Let's cover some classic barbecue sides, plus some out-of-the-box options that pair perfectly with brisket.

Something about potato salad immediately evokes summer days spent picnicking in parks and summer nights spent grilling outdoors. For me, a mayo-based salad is a must on any barbecue plate — and potato salad will always beat out macaroni salad, so it's got to be this recipe every time.

The recipe title says it all. If you're looking for a simple, classic cornbread to serve alongside brisket, look no further. According to author Adriane Miller, a.k.a. soulfoodscholar, "Minnie Utsey's cornbread follows a classic soul food formula, particularly with the use of yellow cornmeal and sugar." And having made this recipe, I can verify that it's a formula that works very well.

After chowing down on juicy smoked brisket, all I want is a punchy salad or slaw to cut through all the fat. This salad is crunchy, acidic, and packed with surprisingly satisfying raw sweet potato cut into compact matchsticks. To me, it's the perfect side for summer smoking or grilling.

Miso-ginger dressing may not be the first thing you think of when you hear "American barbecue," but this umami-rich, slightly citrusy slaw is the perfect acidic complement to the smoke and fattiness of brisket.

Another uncommon, but delicious pairing: Switch up your sides by swapping the standard coleslaw for this bright, crunchy salad. Shaved, raw Brussels sprouts are a welcome update on the classic cabbage, and mayo is swapped for a more biting, lemony vinaigrette. If you're afraid of pecorino fighting brisket for the spotlight, feel free to leave it out.

Make one smart switch to save on time: Swapping lentils for dried beans means you can achieve the same depth of flavor as homemade baked beans in a fraction of the time. Think less sugar, more spice, and slightly creamier than your average baked beans. Plus, this Genius-approved recipe is pretty hands-off technique-wise — exactly what you need after smoking all that meat.