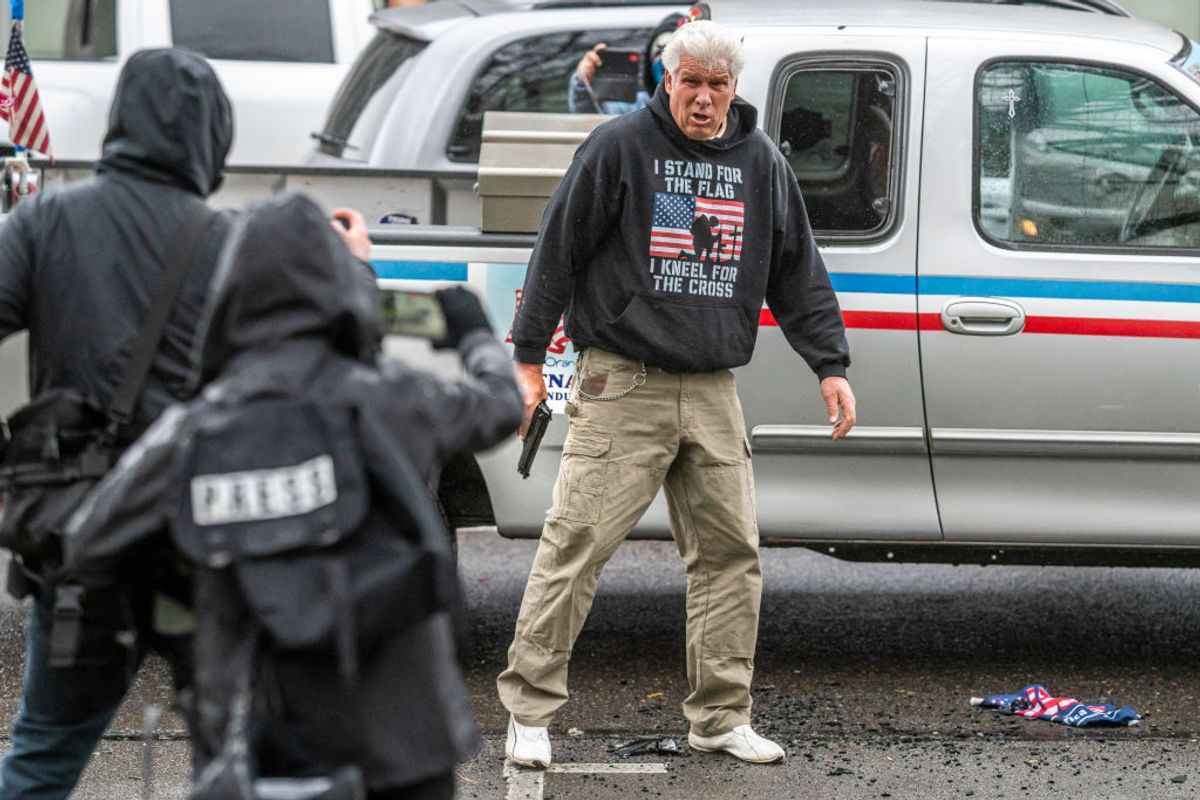 A driver pulls a handgun on protesters after they allegedly broke his truck's lights on March 28, 2021, in Salem, Oregon. The protesters clashed with occupants of vehicles that had participated in an American flag-waving car caravan, despite law enforcement efforts to keep the groups separate. (Nathan Howard/Getty Images)
--

On Sunday, Trump supporters, reportedly including members of the far-right militia the Proud Boys, exchanged blows with approximately 150 antifascist demonstrators in Salem, Oregon. The two rival groups clashed near the State Capitol building as the day came to a close, with one Trump supporter being detained after drawing a firearm on black-clad demonstrators who had allegedly damaged his vehicle.

During the afternoon hours, anti-fascist demonstrations could be seen blocking access to a street nearing the Capitol building where Trump supporters were parading with pickup trucks bearing pro-Trump flags. The apparent objective of the antifascist demonstrations on Sunday was to derail a planned right-wing event called "Freedom" in Salem's central town square.

"The 'Freedom' rally was advertised starting in February on social media as an event to honor those who 'fought for our freedoms,'" The Statesman Journal reported. As the afternoon progressed and tensions flared, an additional video emerged of a blue truck barreling through the demonstration's roadblock and nearly crashing straight into one demonstrator in the middle of the street.

A truck with an American flag drives through a crowd of counter protestors in Salem, Oregon pic.twitter.com/IdMdalXqPQ

According to Oregon Public Broadcasting (OPB) reporter Sergio Olmos, some vehicles apparently belonging to Trump supporters were pelted with various objects or "splattered" with paint. "Several other vehicles also drove in and near the crowd over the course of the afternoon. Anti-fascist protesters threw objects and splattered some of the vehicles with paint," OPB reported.

Late in the afternoon, one Trump supporter was detained by Salem police after he pulled a gun on antifascist demonstrators, apparently after one of his windows was smashed and paint was flung on his silver pickup, which was festooned with American flags and bore red, white and blue striping. As seen in news images, the man was wearing a hoodie that read, "I Stand for the Flag/ I Kneel for the Cross," a popular right-wing slogan. The man appeared to pull a handgun from his waistband, but no shots were fired.

Salem police move in to arrest. No shots fired. pic.twitter.com/XMeJtbXWWH

Police quickly moved in to detain the man, who tossed the firearm into the bed of his pickup truck before complying with law enforcement.

Oregon has been the site of numerous confrontations between right-wing and left-wing protesters over the past few years, but this was the first notable such encounter since the Jan. 6 insurrection at the U.S. Capitol. "Violent protests between the sides were common during the Trump administration, as anti-liberal groups would often travel to cities like Portland and Salem to engage in the conflicts," as Oregon Public Broadcasting noted in its report.

Following the Salem clash, One America News (OAN) correspondent Jack Posobiec — who has frequently collaborated with neo-Nazis and white supremacists — attempted to frame the incident in quite different terms, writing that "armed Antifa insurrections attempted to overthrow the Oregon state capitol today." That does not appear to be the case.

The tweet below is getting a lot of traction but isn't even close to being true.

The crowd of antifascist activists gathered in front of the Capitol to counterprotest a planned right-wing event. There was no attempted overthrow. pic.twitter.com/Dd7U12qKfS