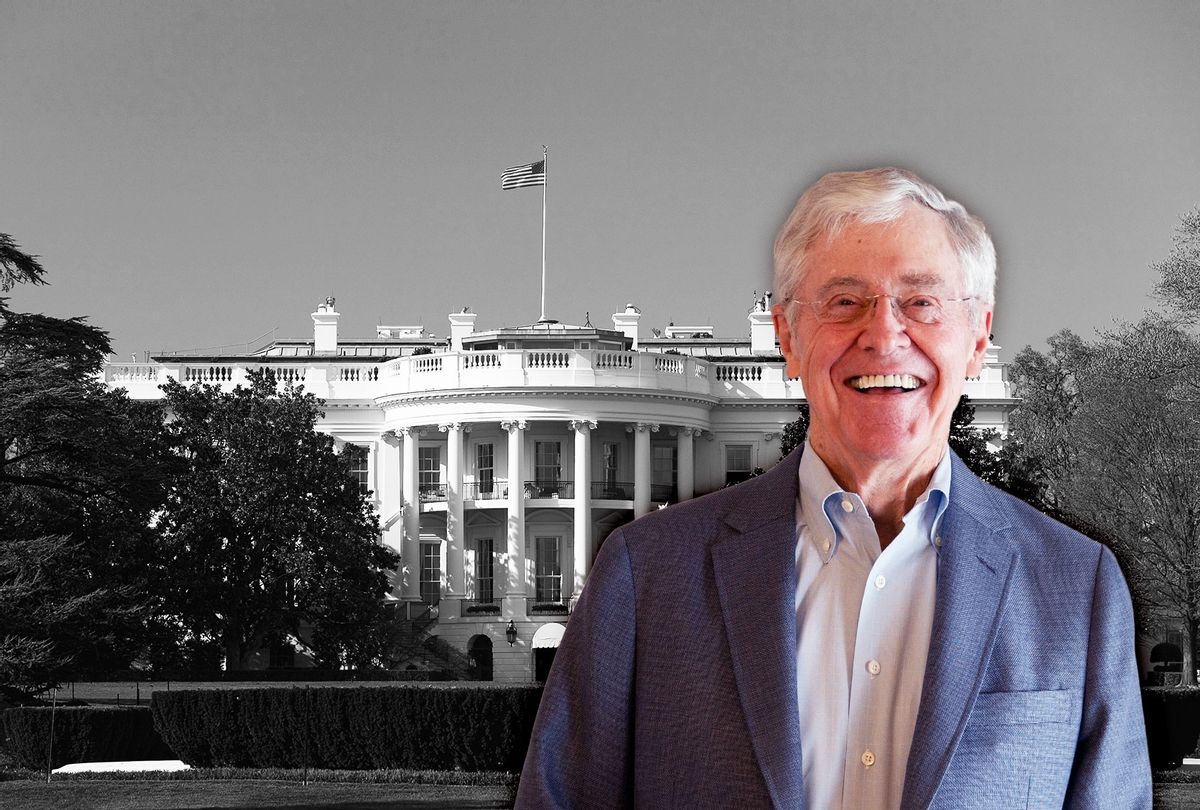 The GOP's war on voting, while raging on in red states across the country, remains incredibly unpopular — and Republican megadonors are reportedly growing nervous.

Republican operatives are making a strategic pivot in their efforts to combat the For the People Act or H.R. 1, dismissing the notion of a broad messaging campaign to instead exert pressure on Congress to kill the bill, according to a private call obtained by The New Yorker. In the call, a policy adviser to Sen. Mitch McConnell, R-Ky., and several prominent right-wing advocacy groups expressed distress over the broad public support behind H.R. 1, the Democratic-backed ethics and voting overhaul that proponents claim will enshrine the electoral system in unprecedented transparency and accountability.

According to the New Yorker's Jane Meyer, the participants of the call "conceded that the bill, which would stem the flow of dark money from such political donors as the billionaire oil magnate Charles Koch, was so popular that it wasn't worth trying to mount a public-advocacy campaign to shift opinion."

"Instead," she explained, "a senior Koch operative said that opponents would be better off ignoring the will of American voters and trying to kill the bill in Congress."

On the call, Kyle McKenzie, the research director for Stand Together, a Koch-backed advocacy group, reportedly aired out concerns over the broad-based conservative support for H.R. 1. "There's a large, very large, chunk of conservatives who are supportive of these types of efforts," he warned. According to public opinion testing conducted by Stand Together, he noted, attempting to "engage with the other side" –– or combating the idea that the bill "stops billionaires from buying elections" –– is a losing battle. The only way to defeat it, he concluded, is by GOP obstructionism.

A small but vocal collection of conservative advocacy groups are nevertheless publicly campaigning against donor disclosure –– a provision H.R. 1 would mandate –– on account of potential harassment. For example, members on the call such as Gretchen Reiter, the senior vice-president of communications for Stand Together; Steve Donaldson, a policy adviser to McConnell; and Heather Lauer, the executive director of People United for Privacy, are expressly against donor disclosure for that very reason.

However, as the New Yorker noted, "Advocates for greater transparency in political spending argue that there is no serious evidence of any such harassment."

According to Heritage Action press secretary Noah Weinrich, "The filibuster is really the only thing standing in the way of progressive far-left policies like H.R. 1, which is Pelosi's campaign to take over America's elections."

Liz Hempowicz, Director of Public Policy at The Project of Government Oversight, echoed a similar sentiment. "I think the bill will pass the House," she recently told Salon's Igor Derysh. "I think the Senate is a big question mark. It really comes down to whether Democrats are going to get rid of the filibuster."

However, Democrats are not unilaterally sold on nuking the filibuster. Both Sens. Manchin and Kyrsten Sinema, D-Ariz., have expressed an unwillingness to scrap it, rendering the 51-vote majority needed to do so untenable.

Last week, Manchin threw his support behind H.R. 1, but expressed that he still wants bipartisan support. "Pushing through legislation of this magnitude on a partisan basis may garner short-term benefits," he said in a statement, "but will inevitably only exacerbate the distrust that millions of Americans harbor against the U.S. government."