Rep. Matt Gaetz under investigation for sexual relations with teenager — he claims extortion

Trump-friendly Florida congressman, long the focus of rumors, under DOJ investigation but says he's being extorted 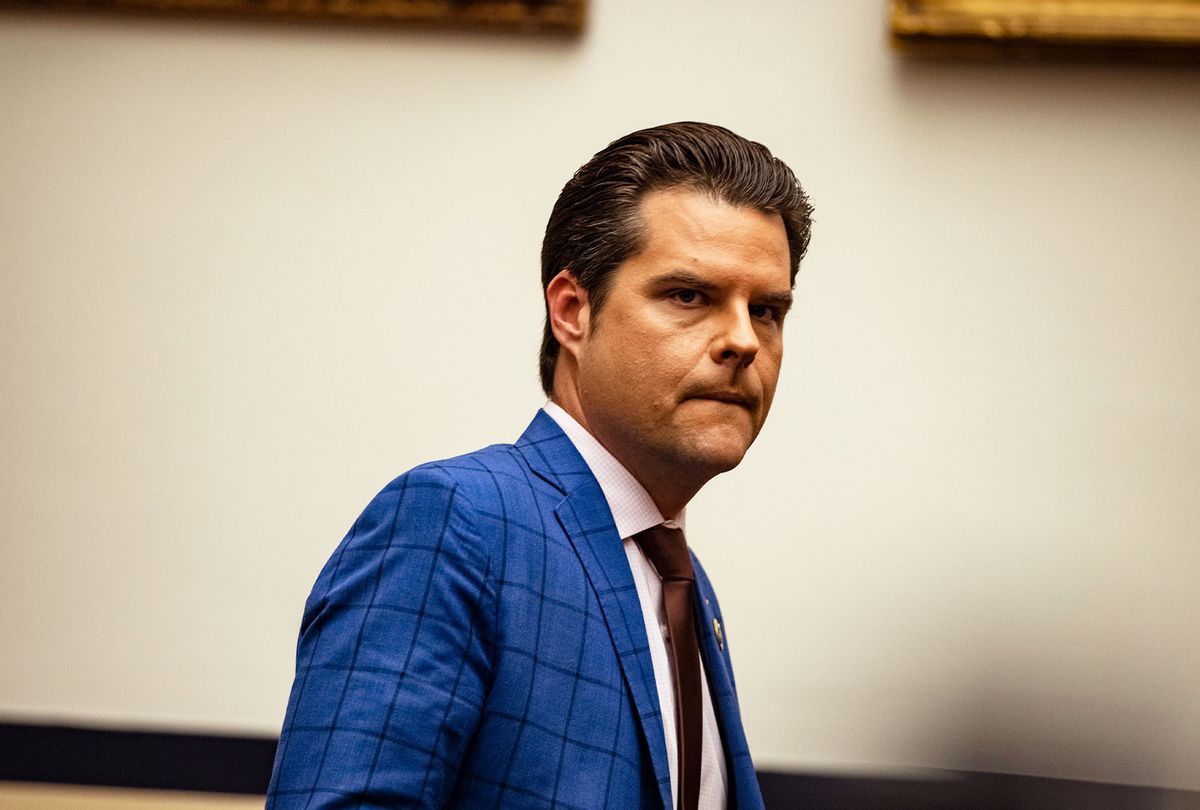 On Tuesday night, The New York Times reported that the Department of Justice is investigating Rep. Matt Gaetz, a Florida Republican known as a flamboyant supporter of former President Trump, over an alleged sexual relationship with a 17-year-old girl Gaetz purportedly paid "to travel with him." But the story only got stranger from there, with Gaetz appearing on Tucker Carlson's Fox News primetime show to respond to the allegations, claiming that a former Justice Department official was behind an elaborate scheme to extort Gaetz and his family for $25 million.

Three anonymous sources told the Times that the probe was launched in the final months of Trump's presidency. "Investigators are examining whether Mr. Gaetz violated federal sex trafficking laws, the people said. A variety of federal statutes make it illegal to induce someone under 18 to travel over state lines to engage in sex in exchange for money or something of value. The Justice Department regularly prosecutes such cases, and offenders often receive severe sentences," the Times report continued.

After the Times report was published, Gaetz sent out a flurry of tweets and later appeared on Carlson's cable show. "What is happening is an extortion of me and my family," the Florida congressman told Fox News' superstar host, before claiming that "a person demanded $25 million in exchange for making horrible sex trafficking allegations against me go away."

Matt Gaetz vows to Tucker Carlson he didn't "travel" with a 17-year-old, but his denial seems pretty specific and carefully worded pic.twitter.com/emGePJeVfV

"I know that there was a demand for money in exchange for a commitment that he could make this investigation go away, along with his co-conspirators," Gaetz continued. "They even claimed to have specific connections inside the Biden White House. I don't know if that's true; they were promising that Joe Biden would pardon me. Obviously, I don't need a pardon." Gaetz denied any wrongdoing on the primetime show and claimed that unnamed people had been "smeared to try to take them out of the conversation." Asked specifically about the 17-year-old girl by Carlson Tuesday night, Gaetz claimed the "person doesn't exist," and the allegation was "totally false."

Gaetz mentions that someone has alleged there's photos of him with child prostitutes. He claims such pictures don't exist. pic.twitter.com/GSCz9ea8T4

Gaetz went on to claim that David McGee, a former Department of Justice lawyer, was behind the extortion plot. McGee was formerly an assistant U.S. attorney in the Northern District of Florida and lead attorney at the DOJ's Organized Crime Task Force lead attorney, and since 2005 McGee has worked at a private law firm in Florida. In a Tuesday night interview with The Daily Beast, McGee said that Gaetz's claim was "completely, totally false," adding: "This is a blatant attempt to distract from the fact that Matt Gaetz is apparently about to indicted for sex trafficking underage girls."

Earlier on Tuesday afternoon, in an interview with Axios, Gaetz sounded "shaken" after the New York Times story went live. When asked by Axios about what underlying facts may have led to these allegations, Gaetz said: "I have definitely, in my single days, provided for women I've dated. You know, I've paid for flights, for hotel rooms. I've been, you know, generous as a partner. I think someone is trying to make that look criminal when it is not."

Notably, during the interview with Tucker Carlson Gaetz attempted multiple times to rope the Fox News host into the allegations being leveled against him by referring to an occasion when the two had dinner together. "I'm not the only person on screen right now who's been falsely accused of a terrible sex act," the Florida congressman stated. "You were accused of something you did not do, so you know what this feels like." Carlson then replied, "You just referred to a mentally ill viewer who accused me of a sex crime 20 years ago. And, of course, it was not true. I never met the person."

"You and I went to dinner... I brought a friend of mine. You'll remember her." pic.twitter.com/eyV0o61vFZ

Gaetz then proceeded to enlist Carlson in his defense. "You and I went to dinner about two years ago, your wife was there, and I brought a friend of mine; you'll remember her," Gaetz continued. "And she was actually threatened by the FBI, told that if she wouldn't cop to the fact that somehow I was involved in some pay-for-play scheme that she could face trouble. ... And so I do believe that there are people at the Department of Justice who are trying to smear me, you know. Providing for flights and hotel rooms for people that you're dating who are of legal age is not a crime. And I'm just troubled that lack of any sort of legitimate investigation into me would then convert into this extortion attempt."

Carlson's responded by stating: "I don't remember the woman you are speaking of or the context at all, honestly."

Following the Gaetz interview, Carlson returned from a commercial break and reacted to the segment with an astonished demeanor. "You just saw our Matt Gaetz interview. That was one of the weirdest interviews I've ever conducted," he said. "That story just appeared in the news a couple of hours ago, and on the certainty that there's always more than you read in the newspaper, we immediately called Matt Gaetz and asked him to come on and tell us more. Which, as you saw, he did. I don't think that clarified much, but it certainly showed this is a deeply interesting story and we'll be following it."

Wow. Back from commercial, Tucker Carlson proclaims that the interview he just conducted with Gaetz was "one of the weirdest interviews I've ever conducted." pic.twitter.com/85Fnyv4Km9

You can watch the entire interview in full below, via YouTube.