Some samaritans spend 8 hours a day, without pay, helping others find vaccines. What drives them? 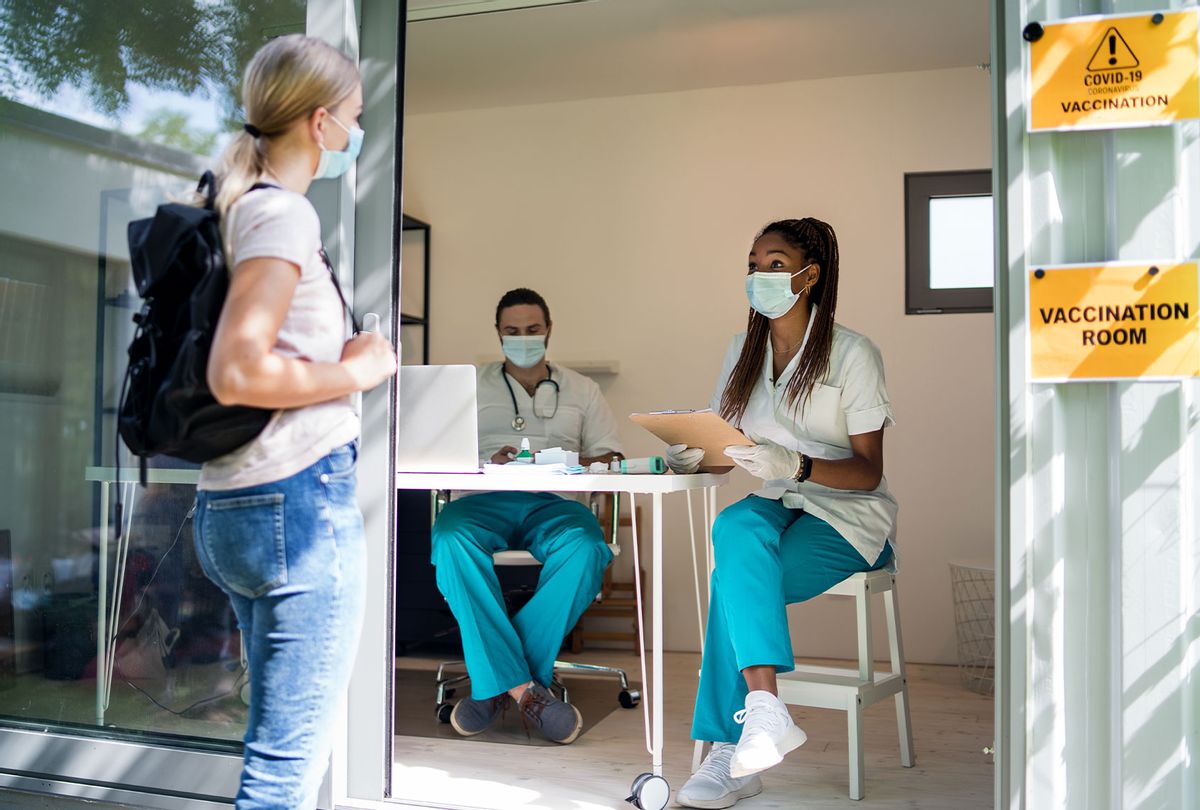 Samona Taylor has a weird nightly routine. Just before midnight, she pulls up six tabs on her browser, each open to a different chain pharmacies' website. Then she proceeds to answer the "threshold questions" to unlock appointment availability for the coveted COVID-19 vaccine.

But Taylor, 49, isn't trying to get an appointment for herself. She's booking them for other people — strangers, friends of friends, and people who are acquainted with those she's helped before. By day, Taylor is a lawyer. At night, the self-described "night owl" is moonlighting as a "vaccine angel" — someone who, without any financial incentive, helps set up and arrange vaccination appointments. While she considers herself to be a "volunteer," Taylor is not volunteering for any organization. Rather, she's part of a growing movement of people spending their free time helping others book vaccine appointments.

And she is very effective at what she does: Taylor estimates that she's helped about 25 people book vaccine appointments now.

Once her browser tabs are loaded, Taylor studies slips of paper scrawled with medical information for each of her clients. Usually this includes their eligibility, birthday, how far they're willing to drive, and full name. From the dim light of her monitor, she copies it into the questionnaire.

"I'm either waiting for a bot notification that there's been a release of vaccines," Taylor told Salon. "Or I'm waiting for 12:01am, and I hit F5 [refresh] on the city that I've pre-selected and, boom, appointments."

As Taylor described, many vaccine hunters have built bots, small pieces of software that tweet or text when appointments are available at vaccination sites. If no appointments are released by the bots, she stays up until 2 in the morning refreshing the pages.

"Between 1:30am and 2am there's an abundance of appointments, because nobody's awake," Taylor said. "And by 2am I'm done."

Though the confirmation emails are set to go out to her clients, Taylor also collects screenshots just in case. Then, she goes to bed.

She has been doing this about every night for the last two and a half weeks now.

"It's just become sort of a habit," Taylor said.

She wakes up to an email inbox full of thank-you notes in the morning.

According to data from the Centers for Disease Control and Prevention (CDC), at least 29.4 percent of the country's population has received one dose of one of the three COVID-19 vaccines, as of March 31st. A mere 16.4 percent of Americans are fully vaccinated, and yet within that demographic, there are inequities in terms of how the vaccines have been distributed. According to a brief from health advocacy nonprofit Kaiser Family Foundation, whites are consistently more likely to have been vaccinated compared to people of color.

Indeed, there are plenty of barriers to getting vaccinated, which may be contributing to the racial and ethnic disparities. Some of the biggest barriers are time and tech literacy. And many Americans do not have the luxury of time nor the understanding of computers that the vaccine angels have.

While Taylor "works" evenings, others have made being a vaccine angel into a full-time job, like 33-year-old Grace Powers. After Powers was laid off from her tech job as a project manager in San Francisco, she wanted to do something to give back to her community.

"I decided to look into the vaccine process because I didn't qualify at the time, but I was just curious about how everything was going. . . the eligibility criteria, just the ins and outs of it," Powers, who is a social worker by trade, told Salon. "And I realized how convoluted it was, and realized that people will probably need help with this, and I kind of went from there."

Since January, Powers has booked appointments for nearly 200 people.

Powers said her day starts around 10am, on Facebook, which she keeps open in a tab all day. In her other browser tabs, she keeps a number of websites for pharmacies and healthcare providers' appointment pages.

But in addition to helping people book appointments, Powers helps them navigate the "murky" waters of eligibility, something that changes often.

"I tend to focus on seniors a lot, people over 65," Powers said. "Or if they're working a full-time job — it's people that have a lot of other things going on, or may not be as tech savvy, or really don't have the time to constantly refresh website screens," she added. "Or if somebody wants to do it themselves, I will point out when appointments are available and link them to the booking site."

Powers estimates she spends between eight to ten hours a day doing this.

"I don't charge anybody by any means — this is absolutely a grassroots collective effort, and it's our responsibility to help our community," Powers said. "In terms of payment, I had one person, a friend of mine in Michigan offered to pay me, and I said 'no,' of course."

While Powers started out doing this of her own volition, she's now volunteering with Vaccine Fairy, a volunteer-run organization that solicits volunteers to help people book vaccine appointments. Powers is also involved in the Facebook group San Francisco Covid-19 Vaccine Help, a support group for those who are seeking vaccine appointments and those who want to help others find them.

Software engineer Mukesh Aggarwal is among those helpers who are using their professional skills to help others get vaccinated. Aggarwal told Salon he personally experienced the difficulty of booking an appointment while trying to find availability for his parents.

"I wondered, if it's hard for me, a computer engineer, how hard it could be for other people too?" Aggarwal said. He wrote a piece of code that scans multiple websites and then notifies people when appointments are available through a Telegram channel, Bay Area Vaccine Notifications. The channel now has over 10,000 subscribers.

Each vaccine angel Salon spoke with said they had no plans of monetizing their work — they were all happy to give back to the community.

As with Aggarwal, Beth Stanley, a 38-year-old in San Francisco, got started helping others when she experienced the difficulty of getting an appointment herself. As a parent of a child with health issues, she qualified a bit earlier for the vaccine than most.

"It was really hard to navigate," Stanley said of the vaccine appointment system. "Once I was able to get shots for my household kind of handled, I wanted to help other people."

As a vaccine angel, Stanley's schedule has shifted: she says she considers herself to be on call at "Moscone o'clock," a reference to the Moscone Center, a major convention center in San Francisco that is also a mass vaccination site. Moscone o'clock, Stanley said, is the time of day, generally between 4 and 6 pm Pacific Standard Time, when the Moscone Center releases vaccine appointments.

Unlike the others who book appointments themselves, Stanley tags others in the aforementioned Facebook group, which she also moderates. Stanley then alerts members to open appointment slots and also answers questions.

"It's basically real-time tech support with the Moscone appointments right now," Stanley said. "A lot of people have problems with the site and I try to answer all their questions as quickly as possible. It's pretty time sensitive to get it done right."