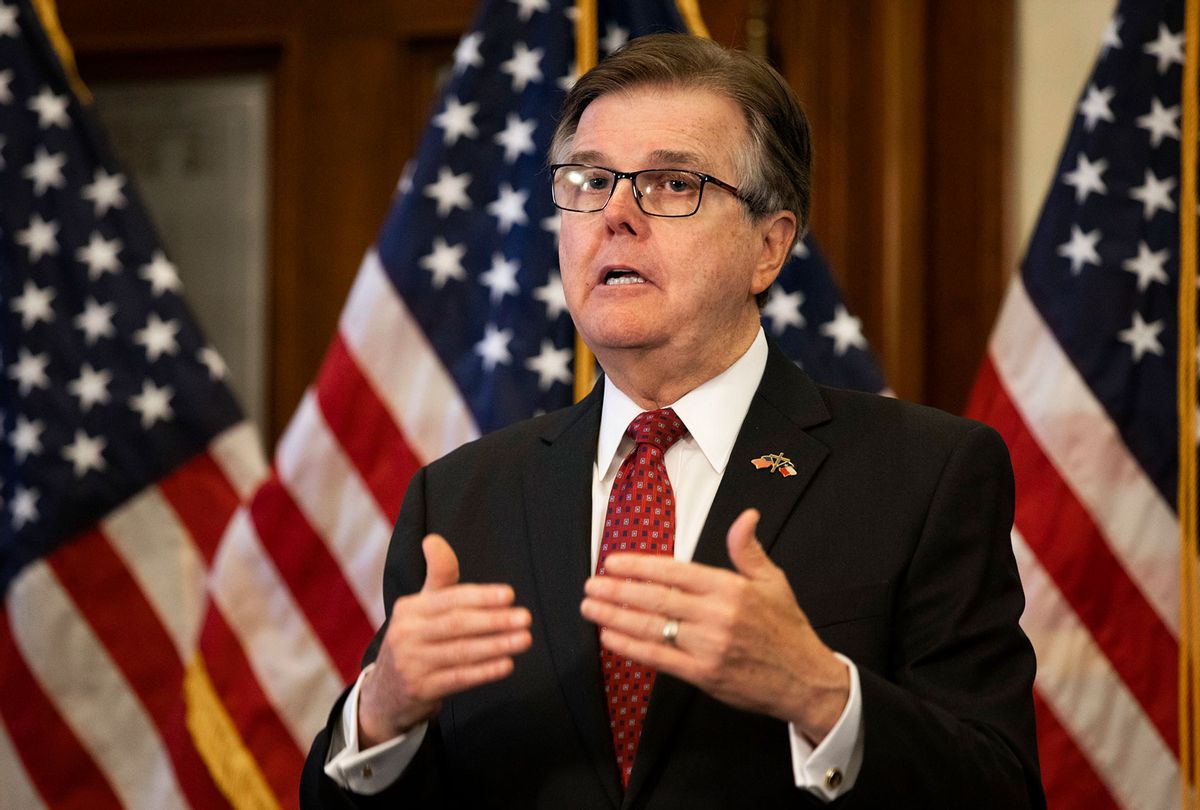 The tide of Republican-sponsored bills aimed at restricting voting access continues to swell, with at least 361 proposed laws in 47 states. That's a 43% increase in just the last month, according to an analysis from the Brennan Center for Justice at NYU Law School.

The Brennan Center previously found 253 such bills in its February roundup, but the number continues to grow as Republican lawmakers seek to crack down on ballot access in response to months of blatantly false claims about election fraud by former President Donald Trump and his allies.

Some of the measures have already been approved, with five restrictive bills signed into law, including a sweeping set of restrictions in Georgia that were likened to Jim Crow-era voter suppression by President Joe Biden and fellow Democrats, who argue the new law will disproportionately impact voters of color. Other restrictive bills have been signed into law in Iowa, Arkansas and Utah.

Another 29 bills have already passed at least one state chamber while 26 others have advanced to committees, according to the Brennan Center report. Most of the bills aim to restrict mail-in voting and about a quarter aim to toughen voter ID requirements. Some bills also seek to make it more difficult to register to vote, expand voter purges of "inactive" voters and restrict voting times. The new Georgia law and other proposed bills also strip power from local and state election officials, giving Republican-led legislatures that sought to overturn Trump's loss last year more power over elections.

Texas, where changing demographics increasingly threaten to upend decades of Republican rule, has rolled out 49 restrictive bills, the most in the country. Georgia, where the legislative session ended on Thursday, was a distant second with 25 bills, and Arizona — where voters last year supported Democrats both in the presidential election and a U.S. Senate race, for the first time since the mid-'90s — comes in third with 23 restrictive bills.

The GOP-led Texas Senate on Thursday approved a sweeping bill that cracks down on absentee and early voting, with many provisions seemingly aimed at undercutting new rules implemented by progressive Harris County executive Lina Hidalgo and fellow Democrats to expand ballot access. The bill restricts early voting hours after Harris County offered 24-hour extended early voting hours in 2020, bans drive-through voting sites that were used by the county, and bans local election officials from sending absentee ballot applications to all eligible voters, which the country tried to do last year before being blocked by a court.

The bill also bans election officials from encouraging or educating voters about early and absentee voting options and requires anyone who needs to vote by mail due to a disability to provide a government document or doctor's note proving they are disabled. It also bars the use of drop boxes and prohibits anyone from casting ballots on behalf of someone else, including spouses. The bill would also impose financial penalties on election officials who fail to purge inactive voters and eliminates certain restrictions on partisan poll watchers.

Texas Lt. Gov. Dan Patrick has touted "election security" as a "top priority," claiming that the legislation will "strengthen the public's faith in our electoral process and ensure that every Texan knows that when they cast their ballot, their vote is secure."

Gilberto Hinojosa, the chairman of the Texas Democratic Party, called the bill a "racist, terrifying attempt to plunge Texas back into Jim Crow."

"This is not who we are. This is not what our state stands for," he said in a statement. "This will do immeasurable harm to Texas communities. Yet Republicans, in their shortsighted, self-serving political games, voted last night to gut the foundations of our democracy: Texans' constitutional right to vote."

Seven restrictive bills have already advanced in Arizona, including four that would ban election officials from sending absentee ballots to voters who did not request them, make it easier to purge voters from apermanent early voting list, impose stricter voter ID requirements for absentee ballots, and reduce the amount of time that voters have to fix ballot issues like missing signatures. Two other bills would ban automatic voter registration and Election Day registration — which is not even available in the state but appears aimed at challenging provisions in pending federal voting rights legislation.

Florida lawmakers have advanced a bill that would outlaw ballot drop boxes, ban anyone except immediate family members from submitting ballots on behalf of someone else, and reduce the amount of time a person can remain on the state's absentee voter list.

New Hampshire lawmakers have advanced 10 restrictive bills, including legislation that would eliminate Election Day voter registration, ban the use of a college ID to vote, ban students from using their college address for voting purposes, make it more difficult to register to vote, and require more identification information for absentee voters.

Michigan lawmakers last week rolled out eight restrictive bills in a single day, aiming to require photo ID for both in-person and mail voting, barring online mail ballot applications, prohibit election officials from sending out mail ballot applications to voters who have not requested them, restrict the use of ballot drop boxes, and cut protections against voter intimidation by expanding the use of poll watchers.

Some states may follow in the steps of Georgia, which rolled numerous provisions affecting virtually every part of the state's election system into a single omnibus bill. Georgia's law incorporated parts of 16 other bills, including a voter ID requirement for absentee ballots, a ban on unsolicited absentee ballot applications, and a provision that makes it a crime to provide food or water to voters in long lines at polling sites. The bill also strips the secretary of state of some power — after current Secretary Brad Raffensperger pushed back on Trump's election lies — and allows the legislature to select its own head of the state election board. It also empowers state officials to take over local election offices, a move that appears aimed at heavily Democratic and diverse Atlanta-area counties that tipped the state's presidential and Senate races to Democrats last year.

Iowa also passed an omnibus bill that combined two other restrictive bills. The new law makes it easier to purge voters who missed a single federal election and imposes criminal penalties for county auditors who fail to purge voters. The law also reduces the amount of time voters have to apply for absentee ballots, restricts the use of drop boxes and imposes limits on who can submit ballots on someone else's behalf. The law also cuts the state's early voting period to nine days and even requires polls to close an hour earlier on Election Day.

Republicans have denied allegations of voter suppression, arguing that they are merely responding to voter concerns about election integrity. But those concerns grew out of a months-long campaign by Trump and Republican state legislators themselves to stoke doubts in the security of mail voting, even though mail voter fraud is virtually nonexistent. Dozens of courts, including judges appointed by Trump and other Republicans, rejected election lawsuits from the GOP either because they failed to file challenges until they lost elections or because they lacked any evidence. Former Attorney General Bill Barr acknowledged that the Justice Department investigated and found no evidence of any widespread fraud. Georgia Republicans and even law enforcement agencies launched multiple audits, recounts and investigations into the election and found no evidence of widespread fraud or irregularities.

In some cases, Republicans have acknowledged that voting restrictions will help them gain a partisan advantage. Michael Carvin, an attorney for the Arizona GOP, told the Supreme Court last month that removing restrictions would put the party at a competitive disadvantage. Arizona state Rep. John Kavanagh defended the party's new proposed restrictions by arguing that "everybody shouldn't be voting."

"Quantity is important, but we have to look at the quality of votes, as well," he told CNN.

But Georgia could serve as a cautionary tale for other states aiming to restrict ballot access. At least three lawsuits by voting and civil rights groups have been filed in the past week, seeking to strike down sections of the law and arguing that they amount to racist voter suppression. The state is also facing a corporate backlash from Atlanta-based companies like Delta and Coca-Cola as well as a coalition of dozens of Black executives across the country. President Joe Biden on Wednesday even urged Major League Baseball to move its All-Star Game from Atlanta in response to the bill, which he described as "Jim Crow on steroids."

On the flip side, at least 843 bills that would expand voter access have been introduced across 47 states, according to the Brennan analysis. Nine have already been signed into law, including a Massachusetts bill to extend early voting, a Montana bill to improve access for disabled voters, a New Jersey bill to create early voting, a New York bill to expand automatic voter registration, and multiple bills in Virginia that expands access for disabled voters, early voting, and pre-registration for 16- and 17-year-olds.

At least 112 other bills that would expand ballot access have advanced in 31 states. More than a third of the 843 bills aim to address absentee voting and more than a fifth are aimed at easing voter registration. Other bills aim to expand early voting and restore voting rights to people with past criminal convictions.

Virginia Gov. Ralph Northam on Wednesday touted the state's version of the Voting Rights Act, which would ban racial voter discrimination and includes protections against suppression and intimidation.

"At a time when voting rights are under attack across our country, Virginia is expanding access to the ballot box, not restricting it," he said in a statement. "With the Voting Rights Act of Virginia, our Commonwealth is creating a model for how states can provide comprehensive voter protections that strengthen democracy and the integrity of our elections."