"It's time that the U.S. government take the reins back from Wall Street" 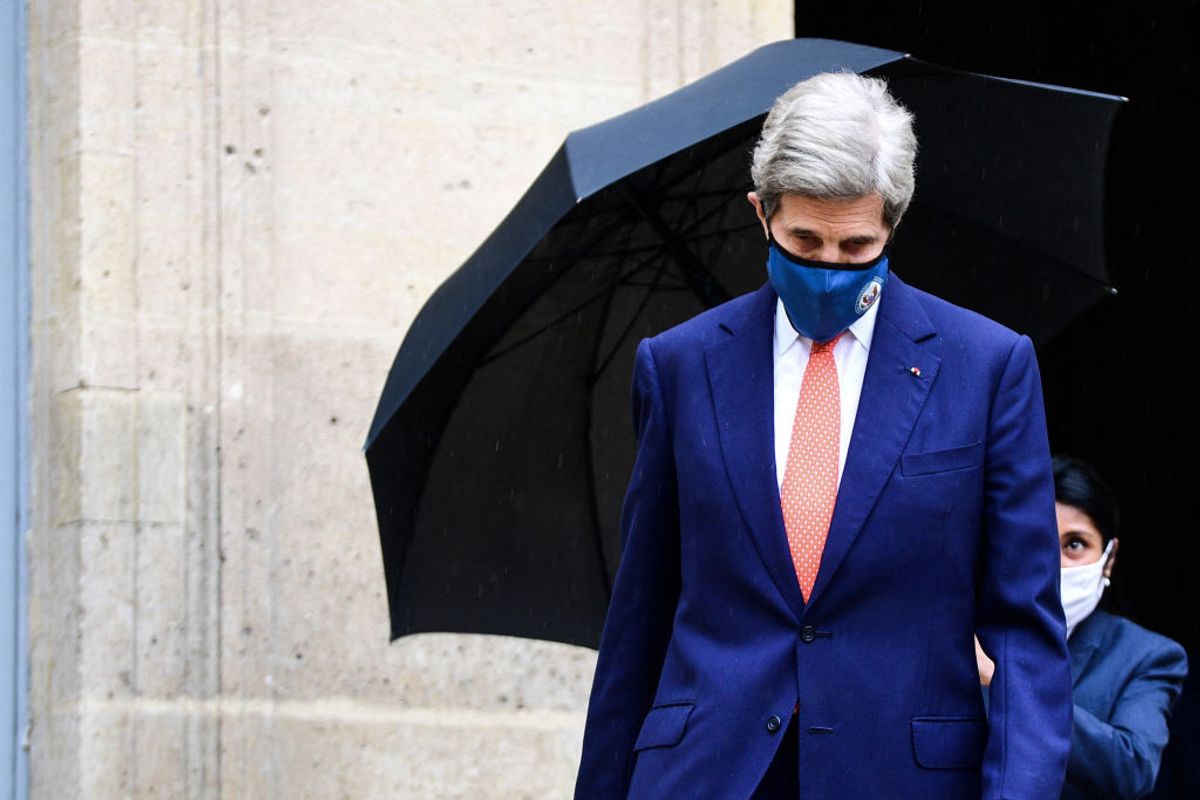 A member of staff holds the umbrella for US climate envoy John Kerry as he leaves the Hotel Roquelaure following his meeting French Ecological Transition Minister, in Paris, on March 11, 2021. (Photo by MARTIN BUREAU/AFP via Getty Images)
--

Just days after he suggested the private sector, not government, will lead the fight against the climate crisis, 145 organizations sent a letter Tuesday urging U.S. Special Presidential Envoy for Climate John Kerry to use his position to help end "the flow of private finance from Wall Street to the industries driving climate change around the world—fossil fuels and forest-risk commodities."

President Joe Biden's selection of the former secretary of state as the first-ever White House climate envoy was met with mixed reactions from advocates, with critics such as Food & Water Action executive director Wenonah Hauter calling Kerry "a long-time apologist for fossil fuel fracking and a reliable promoter of false climate solutions like market-based carbon-trading schemes."

"Climate policy has so far been left to markets, and now we're in a climate crisis," saidMoira Birss, climate and finance director at Amazon Watch and steering committee member of the Stop The Money Pipeline coalition. "It's time that the U.S. government take the reins back from Wall Street so we can assure the rapid, justice-centered decarbonization necessary for a livable planet."

The letter (pdf)—sent just before the release of new data on deforestation that one expert warned "represents a crisis for climate stability and biodiversity conservation, as well as a humanitarian disaster and lost economic opportunity"—argues that demonstrating climate leadership on a global scale requires ending "financing of fossil fuels and deforestation around the world by U.S. firms and entities."

"That is why we applauded President Biden's executive order directing you and Treasury Secretary [Janet] Yellen to develop a U.S. climate finance plan, and why [we] were encouraged when you said this plan will include 'ending international financing of fossil fuel projects with public money,'" the letter says. "However, in order to credibly take on this challenge, we must recognize that Wall Street is not yet an ally—as long as U.S. firms continue to pour more money into the drivers of climate change, they are actively undermining President Biden's climate goals."

The groups expressed disappointment that Mark Gallogly—a major Democratic donor who spent 16 years at Blackstone, the world's biggest private equity firm and a notable investor in fossil fuels—joined Kerry's international climate team, adding that "a climate action approach that seeks to partner with Wall Street without also holding it accountable is no longer credible in 2021."

The letter encourages the Biden administration to embrace four key commitments that would address Wall Street's financing of industries driving the climate emergency:

"Wall Street amassed its riches by pouring money into fossil fuels, and they don't want that gravy train to end," said Doug Norlen, director of the Economic Policy Program at Friends of the Earth U.S. "It's dangerous to suggest that the very institutions that financed and fueled the climate crisis should dictate our response to it. Climate Envoy Kerry must support the use of the levers of government to end U.S. and international institution support for fossil fuel and forest-destroying financing."

The letter says that "until we can hold Wall Street firms to account, no amount of new green finance commitments can credibly undo the damage that their fossil fuel financing is doing to the climate, to U.S. climate leadership, and to our chances of meeting the goals of the Paris agreement." The groups have requested a meeting with Kerry, who was involved with the crafting the 2015 climate deal.

David Arkush, director of Public Citizen's Climate Program, said that "Kerry's recent statement that the government can't do much more than help Wall Street fix the climate crisis is deeply troubling" because "Wall Street is almost completely on the wrong track, and we need financial regulators to help right the course."

"Wall Street is gambling against our future and putting the health of our communities and economy at grave risk. Given the urgency of the climate crisis, we can't afford continued inaction," said Arkush. "Financial regulators already have an obligation to protect us from Wall Street's risky bets and this roadmap is designed to help them act immediately, using all the tools currently at their disposal."

"Financial regulation is a key piece of the whole-of-government approach necessary to tackling the climate crisis and realizing the level of economic transformation needed to avert disaster for people and for the planet," said Alex Martin, senior policy analyst at Americans for Financial Reform Education Fund.

The new letter and roadmap follow a report released last week by RAN and other advocacy groups detailing how the world's 60 largest banks have dumped more than $3.8 trillion into the fossil fuel industry since the Paris agreement was adopted in 2015—despite recent "splashy" net-zero commitments from major U.S. institutions.

Last year, Sen. Jeff Merkley (D-Ore.) introduced a pioneering pair of bills that would prevent banks and global financial institutions from pouring money into fossil fuels. As he said in October: "It's time to prioritize the interests of the American people and the planet above the wishes of fossil fuel CEOs who want to hold our economy hostage."