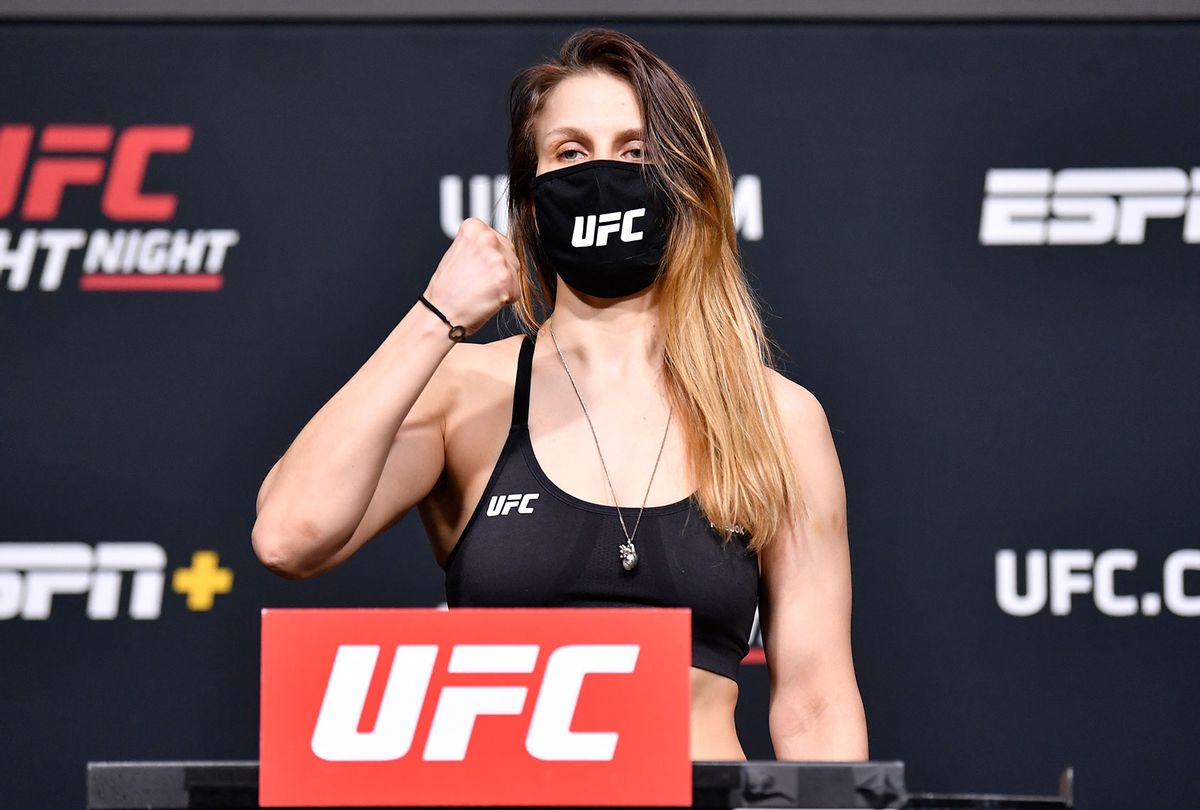 Julija Stoliarenko of Lithuania poses on the scale during the UFC weigh-in at UFC APEX on March 19, 2021 in Las Vegas, Nevada. (Chris Unger/Zuffa LLC via Getty Images)
--

On the eve of a recent mixed martial arts (MMA) fight, Julija Stoliarenko walked up to the scale on the stage so that Nevada state officials could record her weight. Weigh-ins are always a fraught event; in Ultimate Fighting Championship (UFC) fights, just as in boxing, fighters must adhere to a very precise weight range in order to qualify. Stoliarenko was a UFC bantamweight fighter, which meant she needed to weigh-in between 126 and 135 pounds — no more, no less.

While on the scale, Stoliarenko wobbled and lost her balance, then staggered backward and collapsed against the UFC backdrop. Security personnel rushed to aid her. After several minutes, she tried again and collapsed backwards to the floor. The bout was canceled because of her health complications; specifically, Stoliarenko was knocked out by a dangerous health practice known as weight-cutting, which involves rapidly losing weight in the weeks before a weigh-in and then rapidly gaining it back in the twenty-four hours before a fight.

If you think that sounds risky, you're absolutely right. So why would health-conscious fighters, who rely on their body for their career, willingly do such a thing? And how did it become so common?

Understanding that requires first understanding how weight classes work. In wrestling and combat sports such as boxing and MMA, weight classes were devised to match similarly sized opponents. Athletes are required to weigh-in before competition to ensure they are within the agreed-upon weight range. If opponents are not matched fairly, the heavier opponent will have a significant advantage when it come to generating power — as well as pinning their opponent against the ropes, cage, or mat.

But there's potential for a loophole here. Because weigh-ins generally occur one day before competition, it is possible to game the system if you can somehow artificially lose weight — say, losing water weight, while retaining muscle mass — and then gain it back after weigh-in. Doing this successfully makes it possible for fighters to gain a weight advantage against their opponents, as they show up to the match weighing much more than they did during weigh-in.

This can lead not only to an unfair fight, but also a dangerous one — though often, both fighters are weight-cutting, as it can confer a significant advantage if done successfully.

Here's how it works. Weight-cutting starts off essentially as a seemingly normal weight-loss diet: fighters eat healthy and work to burn more calories than they consume. Ideally, this allows weight loss from burning muscle and fat. Then, as the weigh-in deadline looms closer, athletes resort to losing weight by dehydration. By getting rid of as much water as possible, they can shed the extra few pounds they need to pass the weigh-in, and then gain it back by rehydrating. Usually, that means chugging a bunch of Gatorade as soon as they step off the scale; in extreme circumstances, they may have a friend waiting with an IV bag just off-stage.

Methods for this second, dehydrating phase of weight-cutting are unhealthy, and include drinking minimal fluids; saunas; plastic workout suits; "pre-loading" with excessive water; and taking prescription diuretics to lose water by excessive urination. All of these methods aim to remove water from the body as quickly as possible and in large enough quantities that pounds are lost in a manner of days or hours. Some fighters even chew gum to help spit out more saliva — making every last drop of water loss count.

Veteran athletes often have weight-cutting down to a science, knowing how long they need to cut a specific number of pounds. For example, a high-level wrestler will know how many minutes they need to spend in the sauna to reach a given weight. This might limit the outward appearance of dehydration or minimally impact their performance since they are less dehydrated at each step. But internally, their organs may be on the verge of failure.

Less experienced athletes often struggle with weight-cutting, and in some cases may hire nutrition coaches just to help them shed pounds quickly. That struggle is known as a "hard cut," and is often blamed for a fighter not making weight or suffering consequences of extreme weight loss.

Weight cutting and its effects have yet to be fully documented at the professional level, but in 2013 and 2016, two MMA athletes lost their lives while cutting weight. Leonardo Souza was found collapsed in a sauna after suffering a fatal cerebrovascular event. He took a fight on short notice and was attempting to lose 33 pounds in one week. Likewise, there has been a rise in the number of combatants hospitalized for medical complications in the days leading up to a weigh-in.

In 1996, a series of NCAA weight-cutting related deaths in wrestling within weeks of each other led the organization to re-evaluate weight-cutting practices among their athletes. The NCAA moved weigh-ins from the day before an event to the day of the event. They also recommended instituting what they called a "1.5% rule," which states that athletes should lose not more than 1.5% of body weight per week. For example, a 165-pound student-athlete trying to make a 157-pound weight class should lose no more than two pounds (i.e. 1.2% of total body weight) per week. This helps to minimize the degree of dehydration.

In professional events like boxing and MMA, as well as many international wrestling events, weigh-ins still occur one or two days prior to the competition. Hence, weight-cutting is still common among these fighters, as research has found. Unpublished studies of professional MMA fighters in California showed that most fighters do not weigh within the agreed-upon fight weight-class the night of the bout. Most walk into the cage one or two weight-classes above the contracted weight class.

One study of professional MMA athletes looked at athlete's bodies at weigh-in and then again 22 hours later, just before the bout. In this study, MMA athletes gained an average of 7.5 lbs — 4.4% of their body weight! —  in the 22 hours before the fight. Among those studied, at least one athlete gained back 22 pounds (10% of their body weight) in that day. The study also found that, at fight-time, 39% of the fighters were either significantly or seriously dehydrated as measured by urine specific gravity.

The dangers of weight-cutting have led to calls for weigh-in reforms, both from the media and from professional medical organizations. Indeed, in 2016, a call to alarm over weight-cutting was published in the British Journal of Sports Medicine. California state athletic commissioner Andy Foster, who oversees all of combat sports in his state, has called weight-cutting " the biggest problem in combat sports." Groups such as the American College of Sports Medicine and the Association of Ringside Physicians have issued recommendations to end excessive dehydration as a weight-cutting tool.

Yet, despite the known medical dangers, money always plays a part in hindering reform. If fighters agree upon a weight-class title bout and the fighters do not make weight, then fans and promoters lose out on a much-hyped title fight. To wit: just a few months ago, a Bellator main event had to be changed at the last minute when one fighter failed to make weight.

Tickets, pay-per-views and sponsorships come at a price. Losing a title fight due to a weight issue is like paying to see a movie and then finding out the main actor bailed at the last minute. Professional sports organizations obviously try to avoid these situations, which may be why they tolerate or turn a blind eye to weight-cutting.

In the United States, there is no federal regulatory body that oversees professional combat sports; rather, states have their own athletic commissions who oversee and enforce the rules for boxing and MMA. There have been some proposals for standardization and enforcement of weight-cutting regulations. Some states that see a lot of fights such as California and Nevada have more extensive medical and regulatory bodies in place and the budgets to keep them better funded. In 2019, California passed a measure to curb extreme weight cutting. Fighters weighing above 15% of their contracted limit on the day of the fight would no longer be allowed to compete. Other states have less money and personnel to enforce stricter health and safety measures.

Mixed martial arts is one of the world's fastest growing sports, but lack of federal oversight and inconsistent enforcement of weight-cutting protocols continue to put fighters at a deadly risk if they can't safely make weight. There have been calls for fighters to form their own union, and perhaps better medical care might be part of that package. Unfortunately, at this stage, it is usually up to the fighter and their camp of trainers to regulate what methods they use to cut weight and how fast they do it. When a big name — say, UFC, Bellator, or even the Olympics — comes calling, it can be hard for fighters to resist trying to gain every competitive advantage possible, even those that are dangerous. After all, athletes are trained to push harder, faster, stronger; they may see their weight-cutting as an opponent like any other, one they can outwit or out-muscle. But if we like watching combat sports as spectators, we should speak out about keeping athletes healthy.

Jonathan Gelber, MD, is a surgeon and specialist in sports medicine. He is the author of "Tiger Woods’s Back and Tommy John’s Elbow: Injuries and Tragedies That Transformed Careers, Sports, and Society." Follow him on Twitter at @JonathanGelber.