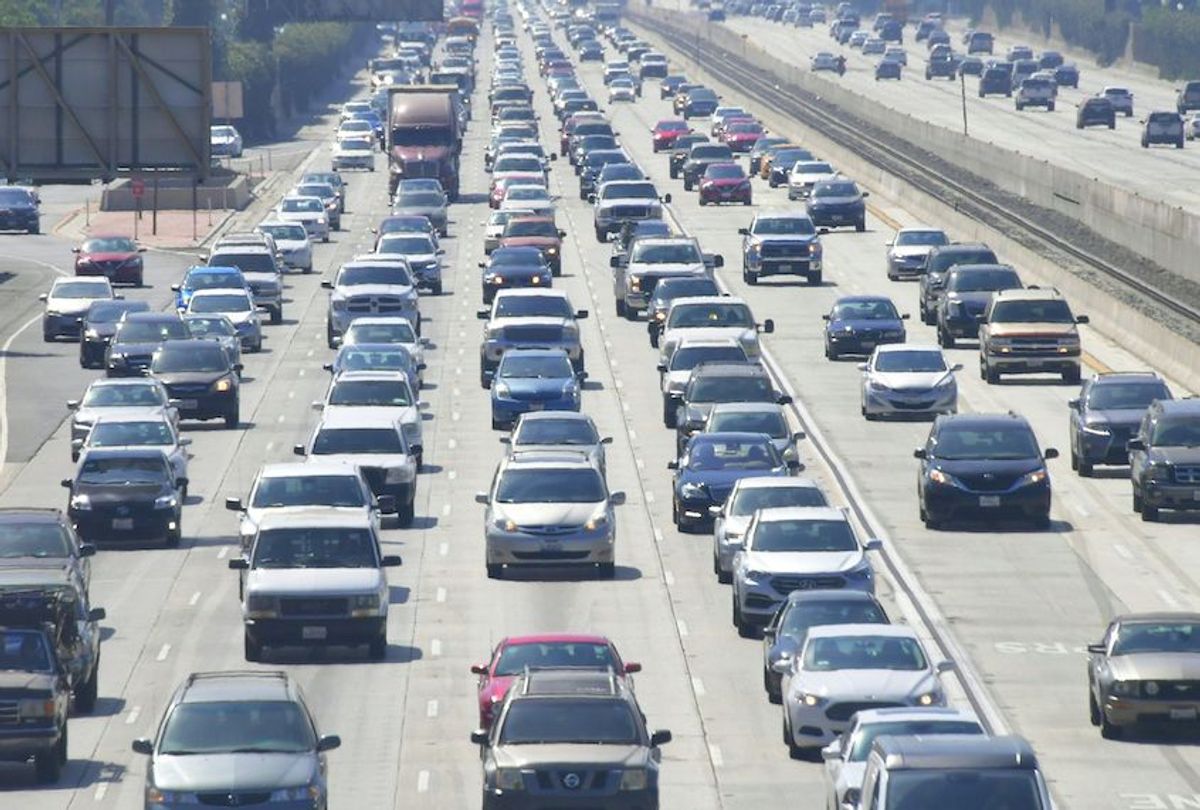 Auto traffic flows in and out of Los Angeles, California, one of the worst traffic-congested cities in the country, on August 28, 2018. - Shares of big US automakers rose on news the US and Mexico reached a deal to update the 25-year North American Free Trade Agreement, pending Congressional approval. (Photo by Frederic J. BROWN / AFP) (Photo credit should read FREDERIC J. BROWN/AFP/Getty Images) (Frederic J. Brown/Getty)
--

Life is gray around P.T. Barnum Apartments, a housing complex for low-income residents in Bridgeport, Connecticut, where Monica Jackson grew up and lived until recently. Within just a few minutes' walk of the community are a highway, an asphalt plant, a waste-to-energy plant, and a sewage treatment plant. You can't get a single breath of fresh air, Jackson said, and the noise pollution is inescapable.

The proponents of an interstate partnership called the Transportation and Climate Initiative say that their plan to reduce emissions from the transportation sector will help neighborhoods like Jackson's. But many environmental justice advocates worry the initiative will leave overburdened communities behind. First conceived in 2010, this collaboration of 13 Northeast and Mid-Atlantic states, plus Washington, D.C., is working to lower carbon emissions from the transportation sector through a cap-and-invest system called TCI-P (the P stands for "Program").

Cap-and-invest programs set a limit (or cap) on overall emissions that lowers each year. Polluters — gasoline and diesel suppliers, in TCI-P's case — must purchase permits for the greenhouse gases they emit, forcing them to either reduce emissions over time or buy permits from other polluters who do so. The goal is to drive down emissions and pollution while generating revenue to be invested back into clean solutions like improving public transportation, building electric vehicle infrastructure, and providing safer bike lanes and sidewalks.

In December, four jurisdictions — Connecticut, Massachusetts, Rhode Island, and D.C. — officially committed to TCI-P, while eight states continue to formally participate in the planning process and can join at any time. (New Hampshire and Maine opted out of the program.) But TCI-P has long drawn the criticismof environmental justice advocates who say that the program won't do enough to reduce pollution in low-income communities of color and cite persistent exclusion from the decision-making process. Although TCI leaders incorporated equity commitmentsinto the program last year, many environmental justice groups remain unimpressed and are pressuring their home states to step back.

"To walk something as big as this back, it's probably a little discomforting and disconcerting for supporters," said Renae Reynolds, the transportation planner for the New York City Environmental Justice Alliance. "But for the environmental justice community, it is not in our best interest to make policymakers feel comfortable with the decisions that they've made when we know that they are not going to result in good outcomes for us."

Supporters of TCI-P highlight that it will cut greenhouse gas pollution from the region's vehicles by an estimated 26 percent and generate more than $3 billion in revenue between 2022 and 2032. The initiative intends to provide communities with cleaner air and more green programs, but many environmental justice advocates don't buy it.

One of the TCI-P equity commitments dedicates a minimum of 35 percent of funds toward overburdened and underserved communities, but environmental justice groups are worried that the money will get raided by state governments to fill holes in their budgets. That's what happened to tens of millions of dollars generated by a cap-and-invest program for the power sector in the region, the Regional Greenhouse Gas Initiative, or RGGI. Trust in cap-and-invest was also corroded by an economy-wide program in California, implemented in 2013. It has been criticized by environmental groups for failing to address the pollution faced by low-income areas and communities of color.

The environmental justice conversation around TCI-P is permeated with a distrust of market-based emissions reduction strategies. Cap-and-invest is an "elaborate scam" in the eyes of Basav Sen, climate justice project director at the Institute for Policy Studies, a D.C.-based think tank. Giving companies permits to pollute, he said, is out of concern for the polluters, not communities. "Why would anyone care about making pollution as cheap for polluters as possible?" he asked. "Ultimately, if you want to address the failure of the neoliberal market system, the only way out of it is to regulate it."

TCI is directed by state and district agencies within the participating jurisdictions and supported by the Georgetown Climate Center. James Bradbury, mitigation program director at the Georgetown Climate Center, said that the environmental justice impact of California's cap-and-invest program is often mischaracterized. While disadvantaged communities in the Golden State are still disproportionately exposed to pollution, there is evidence that their exposure has been reduced more than in other communities, narrowing the pollution exposure gap, he said.

Bradbury also said that California's program was never meant to solve every issue with pollution, and neither is TCI-P. States can enact complementary policies around cap-and-invest to build out their climate strategy. At the state level, Bradbury said, local communities and advocates "really have an opportunity to shape what's enforceable and what's binding."

"Every time I've heard an alternative put forward, it's not actually an alternative," Bradbury said. "It's another policy that is fine and great. There's nothing that prevents that from happening and implementing TCI."

The environmental justice groups that Grist spoke to proposed numerous TCI-P alternatives, including legislation or regulations to halt highway and roadway expansion, invest in affordable public transit, electrify diesel trucks, and change land-use patterns to take sources of pollution like highways and distribution warehouses out of overburdened communities. These groups are advocating for policies that prioritize and offer an immediate benefit to frontline communities, said Maria Lopez-Nuñez, deputy director of organizing and advocacy at the New Jersey-based justice group Ironbound Community Corporation.

"This idea that we're going to get the money and then invest it later shows that the people who created TCI don't live in an environmental justice community," she said.

Environmental justice advocates also worry that TCI-P's plans to electrify transportation without regulating the power sector in tandem will move the source of pollution from tailpipes to gas-fired power plants generating the electricity necessary to power electric vehicles. These plants have disproportionate health impacts on low-income communities of color. Lopez-Nuñez is concerned the funds from TCI-P will be funneled into tax incentives for personal electric vehicles rather than improving affordable mass transit. "We need to make sure that public transportation is free," she said. "That's how you reduce vehicle miles traveled, not by trying to electrify private cars."

Most of these concerns are underpinned by deep frustration with feeling unheard at the decision-making table. Frontline community members should have been included in TCI conversations since the inception of the collaboration in 2010, Lopez-Nuñez said, and their vetoes of the program in recent years should have been taken more seriously.

"We were saying no, and apparently no does not mean no. It just meant 'How about this way? How about that way?'" Lopez-Nuñez said. "It feels like a violation of our community concerns to push TCI on communities who have said no over and over for years."

Pete Rafle, communications director for Georgetown Climate Center, said that TCI, the overall collaboration, is often conflated with TCI-P, the cap-and-invest program itself. While TCI has been working together since 2010, work on TCI-P began in 2015. There were public listening sessions and workshops across the region in 2019, he said. "I understand that the perception is that somehow there was a conversation going on that [environmental justice groups] were not part of," Rafle said. "The actual timeline is a little different from that from the states' perspective."

In an effort to address environmental justice and equity concerns, TCI has also addressed equity questions on its official website and added several commitments to TCI-P, including ones to monitor air pollution in overburdened communities and require participating jurisdictions to establish diverse advisory boards.

But even environmental justice advocates involved in establishing those advisory boards still feel they are struggling to have their voices heard. Sharon Lewis, executive director of the Connecticut Coalition for Environmental Justice, is involved in the design of Connecticut's TCI-P Equity and Environmental Justice Advisory Body. She said she frequently interacted with multiple people who had been involved in the TCI process since 2010, but none of them ever told her about the program, despite her role as an environmental justice leader in the state. It was only in December 2020, after Connecticut had committed to TCI-P, that she received a call from the state's Department of Energy and Environmental Protection, or DEEP, commissioner, Katie Dykes, notifying her of the program. (To Dykes' credit, she did not realize this was the first time Lewis was hearing of TCI-P, Lewis said.)

According to Will Healey, DEEP's media relations manager, this call was part of an intensive phase of individual stakeholder outreach that took place after the state committed to TCI-P. Since then, state officials have regularly engaged environmental justice advocates in program design and implementation, he said. In response to this feedback, Connecticut has raised the minimum investment in overburdened and underserved communities from 35 percent of TCI-P revenue to 50 percent.

"If you're going to advise on equity and environmental justice, how can you sit on that body if you have no experience with or no understanding of inequity or environmental injustice?" Lewis said. "I have to constantly educate folks because people think that environmental justice communities are comprised of people with no education."

Today, the future of TCI-P as a regional program is uncertain. In December, the Sierra Club announced that in solidarity with environmental justice communities, it would no longer support TCI-P. It also called the program's targeted 26 percent reduction in emissions by 2032 "too weak." And it remains unknown whether the eight states that committed to continued collaboration with TCI will actually sign on to the cap-and-invest program.

Lopez-Nuñez described the four jurisdictions currently committed as a "lackluster showing." Without commitments from the larger states in the region, like New York and Pennsylvania, TCI-P is a "patchwork," according to Sen.

Despite the uncertainties, some environmental justice advocates in TCI-P states are trying to make the best of the situation. A bill is moving ahead in the Connecticut state legislature to iron out the details of the state's implementation of TCI-P, and several environmental justice advocates testified at a Connecticut General Assembly public hearing in early March in support of it — if certain amendments are made. Nicole Wong, a campaign manager for Dream Corps Green For All, encouraged the state to incorporate diverse hiring and contracting standards to ensure employment for underrepresented groups and to guarantee localized emissions reductions in areas facing the worst air quality.

Monica Jackson, who lived in the polluted Connecticut housing complex, wants to believe the state has genuine environmental justice intentions in implementing TCI-P. But it's difficult to fully trust them when she's seen injustice endure in her area for generations. "Our leaders know it, these companies know it," Jackson said. "And now we have to wait for money to fix it? It should have been here already."