White nationalist "groyper" movement links up with anti-vaxxers, threatens use of weapons 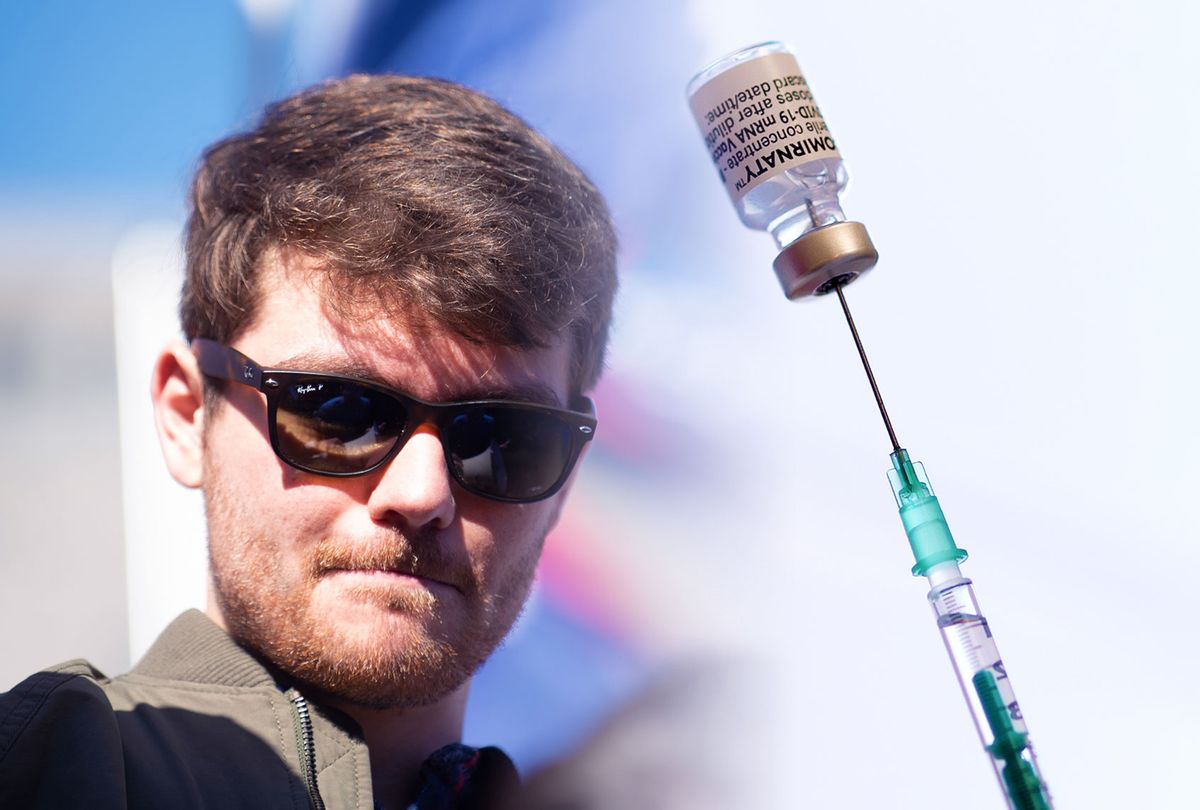 Young white nationalist leader Nicholas Fuentes and his "groyper army" have joined forces with the coronavirus anti-vaccine community, falsely claiming that COVID-19 vaccines were equivalent to "gene therapy" and attempting to frighten his youthful, largely male audience into believing the government will "own" you if you get the shot. In December, Fuentes said during a live stream that he would be willing to take up arms to ward off being injected with a COVID vaccine, Salon discovered.

Fuentes, who first gained prominence as a leading figure at the notorious 2017 Unite the Right rally in Charlottesville, leads an "army" of college-aged young men who believe America should become an all-white or white-dominated "ethnostate." He recently held a conference to rival the more mainstream Conservative Political Action Committee (CPAC), and has heightened his profile and attracted followers by accusing marginally more mainstream pundits like Charlie Kirk and Ben Shapiro of not being true conservatives.

Responding to a "super chatter" (a follower who pays money to ask a question) on Tuesday night about whether or not to get the coronavirus vaccine, the 22-year-old Fuentes responded, "I just want to impress upon you the severity of the situation. You are talking about 'gene therapy' in your veins."

While this is a popular talking point on the far right, coronavirus vaccine do not genetically modify the bodies of humans who take the vaccine. A visiting fellow at Cornell University's Alliance for Science group, Mark Lynas, told Reuters that no vaccine would "genetically modify human DNA." "That's just a myth, one often spread intentionally by anti-vaccination activists to deliberately generate confusion and mistrust," Lynas told Reuters. "Genetic modification would involve the deliberate insertion of foreign DNA into the nucleus of a human cell, and vaccines simply don't do that. Vaccines work by training the immune system to recognize a pathogen when it attempts to infect the body — this is mostly done by the injection of viral antigens or weakened live viruses that stimulate an immune response through the production of antibodies."

Fuentes continued by warning that taking the vaccine could lead to mandated "vaccine passports" — another right-wing talking point — ultimately leaving you "owned" by the government.

"The vaccine passport is coming, and you gotta be willing to say no. You are going to have to say no, or they [the government] own you. And understand we are all in this together; if a lot of people forfeit themselves to the government, then it's over for all of us. They own all of us, and they control all of us," Fuentes declared. "I will never get a COVID vaccine," the white nationalist further tweeted last week.

This pattern, in which Fuentes pushes phony coronavirus claims and discourages his followers from being vaccinated, started last year when Fuentes told his followers he would do just about anything to avoid taking the vaccine — even floating the idea that he would bribe his doctor in order to avoid the shot. "There is no chance in hell, I will ever take a COVID vaccine, no chance," he said, before going on to defend anti-vaxxers, claiming the government was going after them in the media and "censoring" their theories. "The COVID vaccine is injected anally and continues AIDS as well ... and 10k microchips," Fuentes added, in a vein meant to suggest he was at least somewhat joking while still spreading egregious misinformation.

Fuentes did not return a request for comment from Salon.

His health care advice appears to be making an impression on his loyal followers. "Manipulate my DNA or inject satan juice, nah, I'm good," a user commented, using the live chat feature on Fuentes' stream Tuesday night. "Don't take the mark," one user wrote. "J&J vaccine is made with aborted cells," another user claimed, which is a "partly false" claim that numerous news outlets have debunked.

Megan Squire, a professor at Elon University and a Southern Poverty Law Center (SPLC) senior fellow, who researches far-right extremism and hate groups, told Salon that while it's not surprising to hear Fuentes spout vaccine misinformation, it is "disappointing."

"What really concerned me was him telling his followers that he'd rather die than get the vaccine. That kind of heated rhetoric is beyond unhelpful," Squire told Salon. "Current data shows that 49% of white Republican men are 'vaccine-hesitant.' Nick's followers are definitely mostly male, and they would probably answer a survey as 'Republican.' The only difference is that the America First crowd tends to skew much younger than these general population surveys. But obviously, it is disappointing when any large group obstinately refuses a vaccine for purely political reasons."

SPLC senior investigative reporter Michael Edison Hayden, speaking with Salon on Wednesday afternoon, described the collective influence of Fuentes and others on the far right as "dangerous." Hayden said Fuentes uses social media sites to gain legitimacy as a contrarian, which allows him to then "stoke division."

"It is really about disruption and unleashing chaos and mayhem on people, that's the main thing Fuentes is interested in doing," Hayden said, elaborating that Fuentes sees an opportunity amid a polarized political climate to adopt an outlandish position on the coronavirus vaccine. "So when people like this are seeking to promote themselves and undermine the strength of the United States by telling people vaccines are bad ... that's absolutely dangerous."

When the coronavirus pandemic began, Fuentes initially suggested that white people were likely immune. "The good news is I heard actually that you can't get this if you're white ... You're only really susceptible to this virus if you're Asian," Fuentes said at the time. "I think we'll be OK."