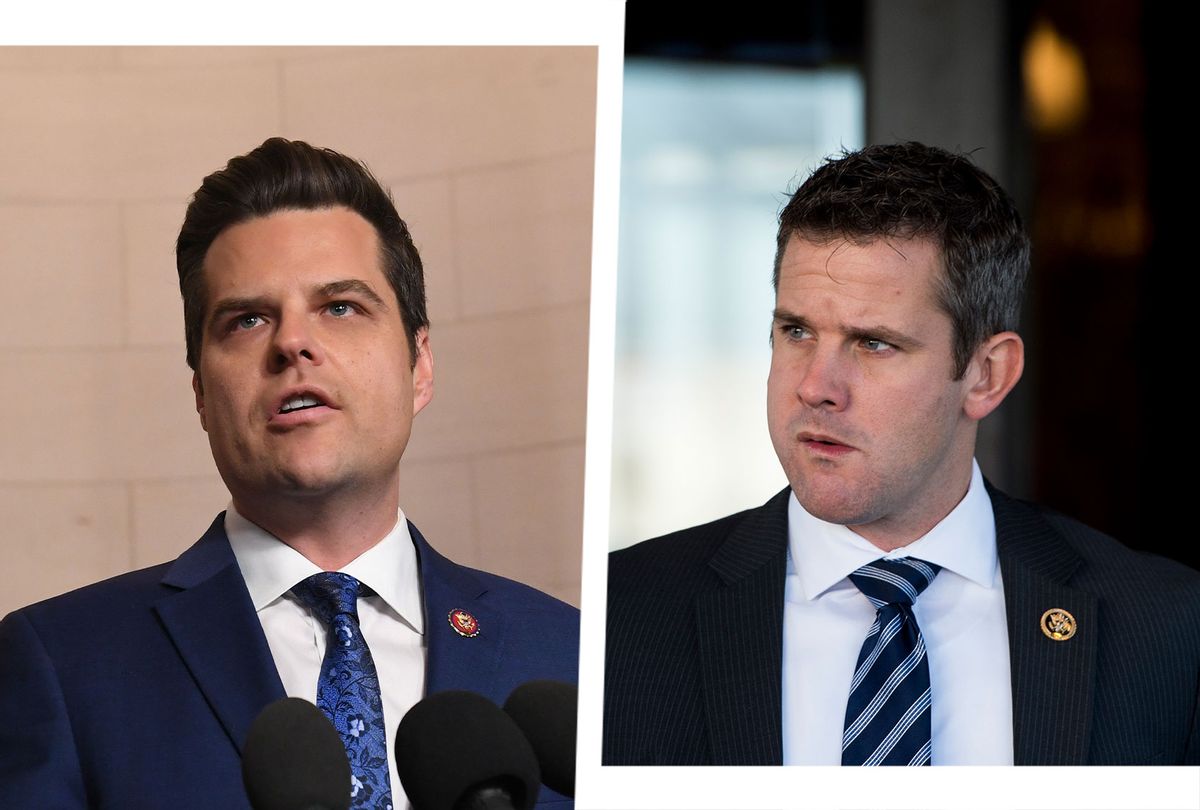 Rep. Adam Kinzinger, R-Ill., became the first in his party to call for the resignation of Rep. Matt Gaetz, R-Fla., who is currently steeped in a federal investigation over sex trafficking.

"Matt Gaetz needs to resign," Kinzinger tweeted on Thursday, linking to a Daily Beast article which details the latest bombshell developments in the story. A Department of Justice investigation, first reported by the New York Times on Mar. 30, is currently probing whether Gaetz had a sexual relationship with a 17-year-old girl and paid for her to travel with him.

Kinzinger, a moderate Republican, has been a routine critic of his own caucus. Back in January, Kinsinger was just one of ten House Republicans who voted to impeach former President Trump over inciting the Capitol riot, a move for which the Illinois representative received scorn from his own family. In February, Kinzinger made himself an enemy of Gaetz when he launched an anti-Trump super PAC. At the time, Gaetz blasted Kinzinger, telling him to "f***ing bring it."

Other Republicans meanwhile, have kept quiet, careful not to fan the flames.

House Minority Leader Rep. Kevin McCarthy said on Wednesday that the allegations made against Gaetz are "serious," and that he plans to speak with the Florida lawmaker. The "DOJ has not told me anything," McCarthy claimed. "If a member at my conference gets indicted, they will get removed from a committee. He says this is not true. And we have a newspaper report that says something else. We'll find out the basis."

On Thursday, the Daily Beast reported that Gaetz had made "two late-night Venmo transactions" to his friend and accused sex-trafficker Joel Greenberg for a total of $900 back in May 2018. The following morning, Greenberg made three payments via Venmo to three young women labelled "School," "School," and "Tuition."

The same day, it was reported that Greenberg and his attorneys were expected to take a plea bargain, indicating that Greenberg might reveal more details about the case in exchange for a lesser sentence. According to the Daily Beast, Gaetz and Greenberg are also connected to another woman who Greenberg paid $300,000 worth of taxpayer funds via a government-issued credit card.

Two members of Gaetz staff have reportedly resigned over the mounting evidence against their boss. The New York Times reported that Gaetz's legislative director Devin Murphy stepped down on Thursday just days after Gaetz's communications chief, Luke Ball, resigned as well. Murphy reportedly told his colleagues that he was interested in writing serious legislation, not working at TMZ.