Meet Matt Gaetz's PR firm, run by Trump ally who bailed on promise to eat his own shoe

Embattled congressman hires pro-MAGA firm whose head promised to eat his shoe if Trump lost. Time to chow down! 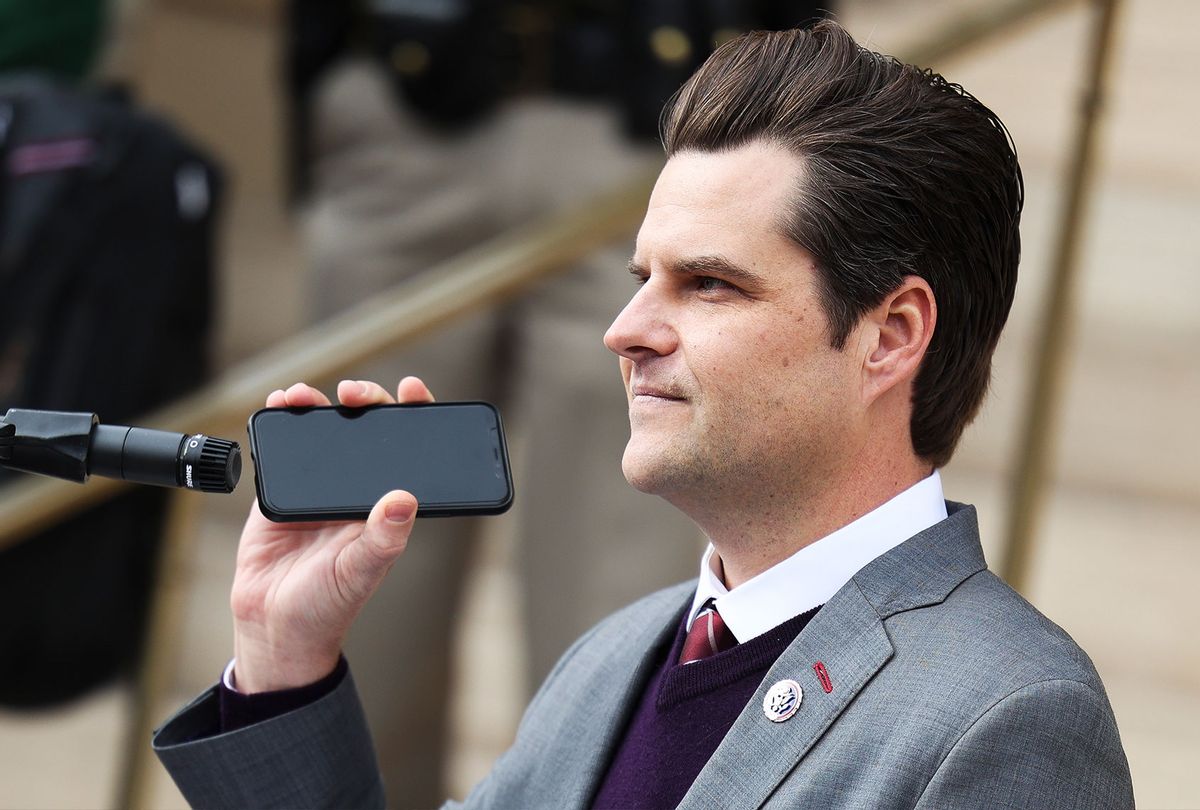 Embattled Rep. Matt Gaetz, R-Fla., has enlisted a small Washington public relations firm to handle a developing scandal that threatens to end his career, involving multiple allegations of sexual misconduct and possible sex trafficking. The firm in question, the Logan Circle Group, consists largely of lower-level Trump allies and is headed by Harlan Hill, a MAGA-world character who thus far has failed to keep his promise to eat his own shoe on a live stream.

On Thursday night, The Daily Beast reported that Gaetz allegedly sent $900 in payment to several young women via the cash application Venmo, by first sending the money to Seminole County Tax Collector Joel Greenberg in May 2018. The Beast further noted that Hill's PR firm has taken up the case of cleaning up Gaetz's mess.

A representative from Logan Circle Group offered the Beast a statement from Gaetz: "The rumors, gossip and self-serving misstatements of others will be addressed in due course by my legal team." Then Logan Circle's Erin Elmore, described as "a pro-Trump pundit and former contestant on 'The Apprentice,'" told Beast reporters that a lawyer would be "closely monitoring" their coverage.

Elmore, who has appeared as a commentator on Newsmax and Fox News, is apparently spearheading the charge to defend Gaetz at the firm and has threatened legal action against various other reporters covering the scandal, according to Politico. A Fox News spokesperson told Salon that Elmore has never been an official contributor to the network, contrary to rumors floating on social media.

Harlan Hill, the president of Logan Circle Group, has achieved minor notoriety for losing a bet but failing to honor his pledge. During an election night party on Nov. 3, Hill made a bet with The Atlantic's McKay Coppins that if Trump lost re-election, he would eat his own shoe on a live stream. Months have passed, and the former president has exhausted all his attempts to overturn the election result, finally retreating to Mar-a-Lago. Hill has yet to fire up a live stream while chowing down on his own loafer. 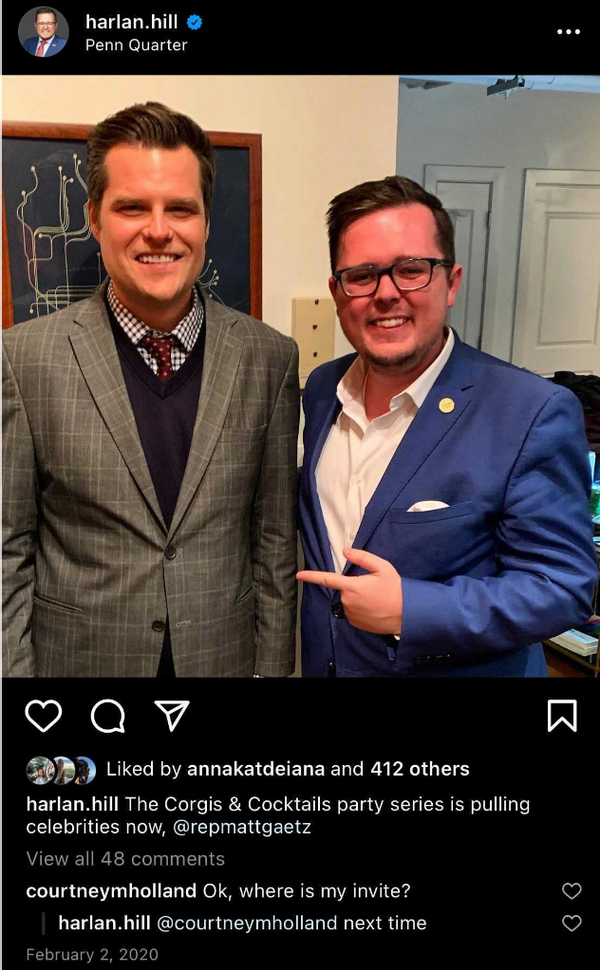 Back in November of 2020, Hill called former Salon reporter Roger Sollenberger (now at the Daily Beast) "a c*nt" over Sollenberger's fact-check of a false tweet. A month before that, Fox News announced that Hill would not be allowed to appear on the channel after he called Vice President-to-be Kamala Harris an "insufferable lying bitch."

Hill didn't return a request for comment from Salon for this story. Salon obtained a series of pictures posted to Hill's Instagram page on Thursday, however, that appear to show him enjoying a visit to Donald Trump's golf resort near Miami. 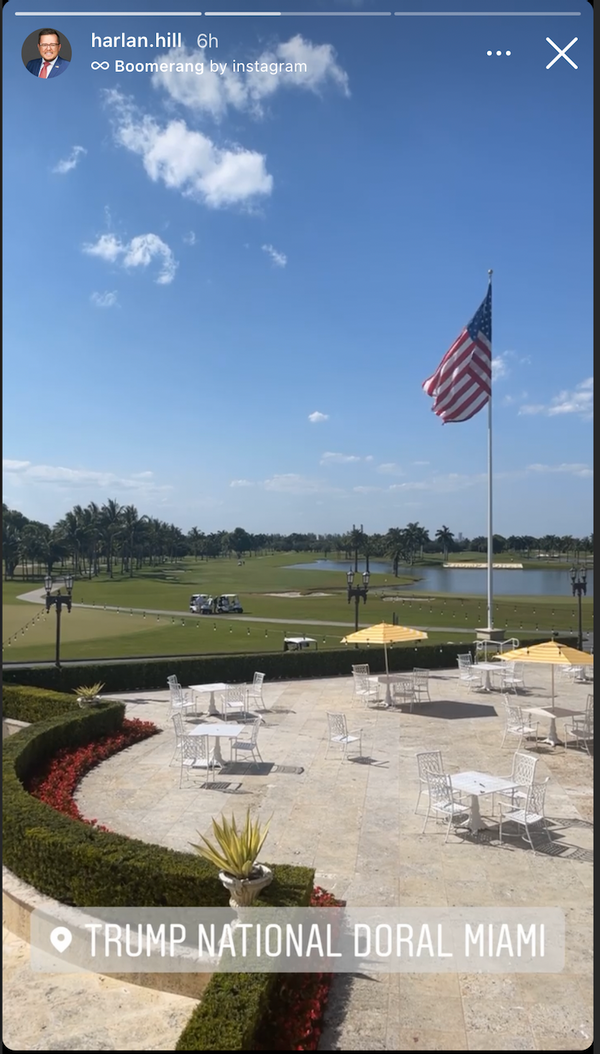 One of Hill's closest allies is former Breitbart editor turned Steve Bannon sidekick Raheem Kassam, whom Hill has described as "my best friend and the only person I'd trust to have my back in the trenches." Kassam now runs a right-wing website called the National Pulse, which has been a stalwart defender of Gaetz through all the twists and turns of the scandal so far. 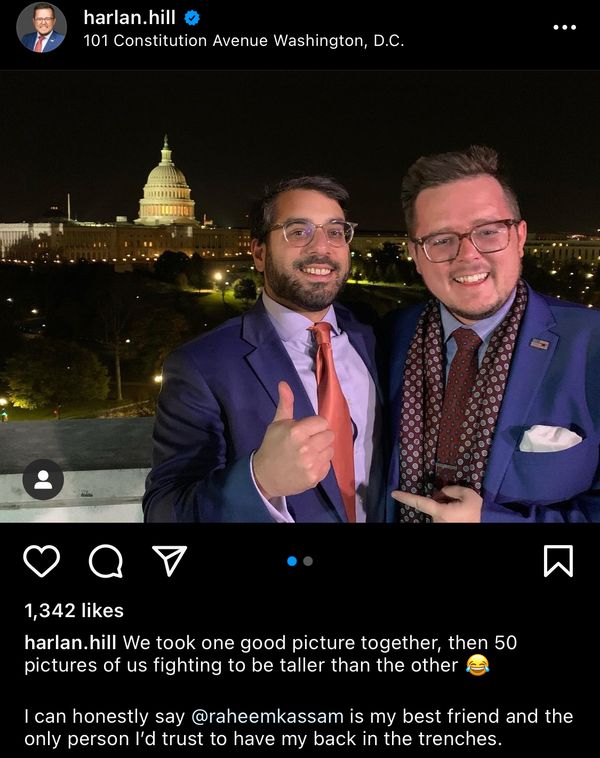 On Thursday night, Salon reached out to Kassam about a photo posted to his Instagram account that appeared to show him at Trump's Florida resort alongside Hill.

For the record, all leftists are pedos and I'll prove every single one :)

The pro-Trump pundit — who now views Fox News as an enemy — responded with a myriad of furious tweets, direct messages and notes stating he intended to contact Salon editors and sue the publication, attempted to call this reporter 12 times via his Signal number, and then sent an email asserting that his own publication would publish an article about this reporter's lack of "credentials."

"In the morning, we will report that you engaged in a targeted and demonstrably false attempt at a harassment campaign against an accredited reporter," Kassam wrote late on Thursday night. "Do you have a comment? We reached out to your colleagues, subjects, and employers and already have critical comments on the record, which allege you have no credentials as a real news reporter and should not be employed by a news outlet as a result. ... You're a fake news moron."