TrumpWorld may be abandoning Matt Gaetz, but ex-prez denies report of pardon request 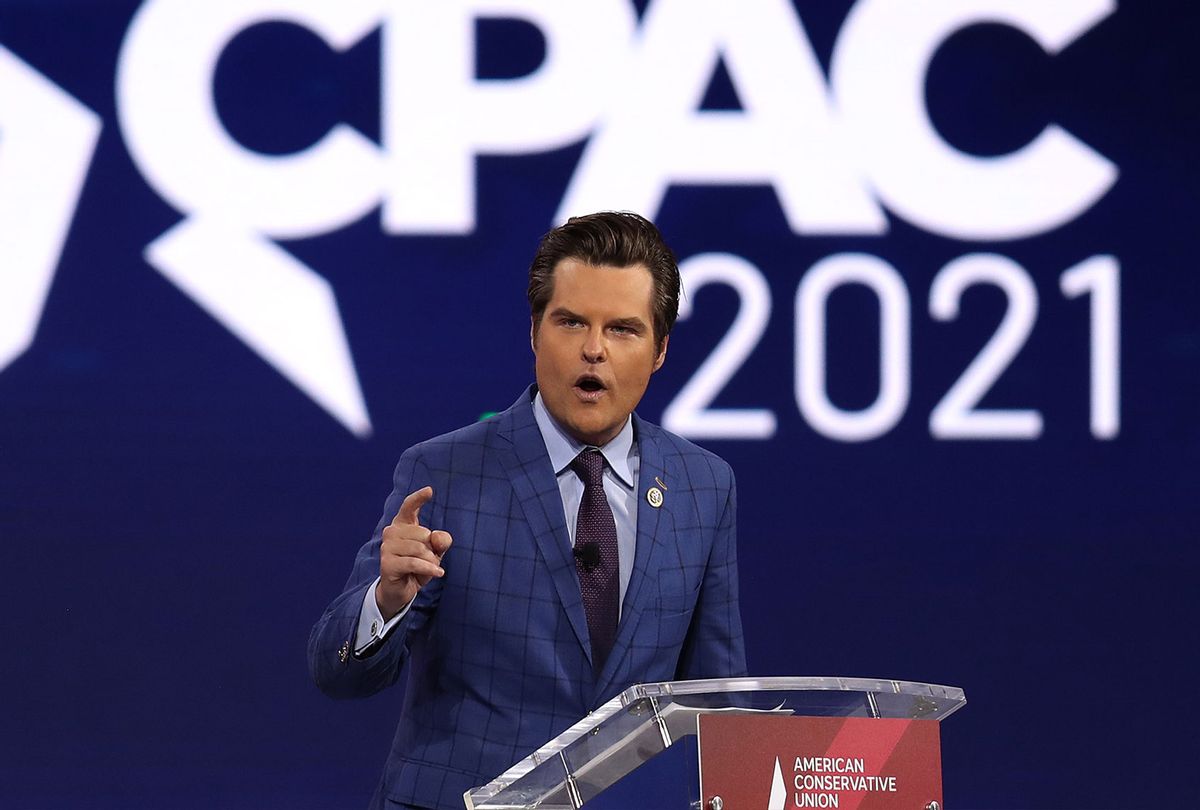 Over the past few days, the Gaetz scandal has only gotten more intense, with rumors swirling in both Florida and Washington political circles but little clarity about Gaetz's alleged sexual relationship with a minor, which the New York Times reported last week. Since that original story dropped, CNN has followed up by reporting that Gaetz showed crude photos of women he had sex with to fellow members of Congress members on the House floor, allegedly "a point of pride" for the pro-Trump congressman.

Gaetz again responded to the allegations Monday in an opinion piece penned for the conservative-leaning Washington Examiner. The flamboyant pro-Trump legislator wrote: "First, I have never, ever paid for sex. And second, I, as an adult man, have not slept with a 17-year-old." The pro-Trump congressman continued, "You'll see more 'drip, drip, drip' of leaks into the media from the corrupt Justice Department and others. When you do, ask yourself why. They aren't coming for me — they are coming for you. I'm just in the way."

Gaetz has also reportedly felt something of a freeze from his once close-knit pro-Trump allies. "Not a lot of people are surprised" by the allegations, a source close to the former president told Politico on Tuesday. Another Trump aide also told the outlet, "Anyone that has ever spent 10 minutes with the guy would realize he's an unserious person."

Among the often-boisterous world of MAGA-oriented Twitter, the only full-throated public support offered to Gaetz by notable individuals so far has been from far-right, QAnon-supporting Rep. Marjorie Taylor Greene, R-Ga., along with former Breitbart editor Raheem Kassam. Politico further reported:

Operatives inside Trump World say the silence is owed to a variety of factors. Among them is the fact that Gaetz has always been regarded as a grenade whose pin had already been pulled. The congressman had a reputation for a wild personal lifestyle that, associates say, occasionally bordered on reckless. Some of Gaetz's own aides would regularly send embarrassing videos of their boss to other GOP operatives, according to two people familiar with the videos.

On Tuesday, The Daily Beast reported on a series of inconsistencies in Gaetz's story and debunked the claim made by the congressman that his "travel record" would prove his innocence. The Beast pointed out that there isn't really any unambiguous category called "travel records," but there are campaign filings. That reporting further brought further questions to the surface, including a parking pass expense suggesting that Gaetz left his car at the airport for about a month while he was supposedly in his home district of northwest Florida.

The news kept coming, as the New York Times reported on Tuesday that Gaetz had "privately asked the [Trump] White House for blanket pre-emptive pardons for himself and unidentified congressional allies for any crimes they may have committed, according to two people told of the discussions."

In a statement to The Times, a Gaetz spokesman said, "Entry-level political operatives have conflated a pardon call from Representative Gaetz — where he called for President Trump to pardon 'everyone from himself, to his administration, to Joe Exotic' — with these false and increasingly bizarre, partisan allegations against him."

On Wednesday, Trump responded with a brief official statement, saying, "Congressman Matt Gaetz has never asked me for a pardon," and adding — in a passive-voice construction that sounds nothing like the former president's normal prose style — "It must also be remembered that he has totally denied the accusations against him."

As Gaetz remains under investigation over whether he broke sex-trafficking laws, conservative media appears to be spending the least amount of time possible sharing the news with viewers. Fox News, where Gaetz was a frequent guest before this news broke, has been largely silent on the scandal rocking the core of TrumpWorld. "Since March 30, Fox News has spent only 45 minutes discussing the evolving allegations" about Gaetz, the media watchdog group Media Matters for America reported. "By contrast, the network has focused on various stories involving Rep. Alexandria Ocasio-Cortez ... for twice as much time: 1 hour and 30 minutes in total." While conservative networks have backed away from the scandal, they do not seem eager to hire the beleaguered congressman for a cable news gig, either.