Fox News made Matt Gaetz a GOP star. Now he's trying to take Fox News' Tucker Carlson down with him 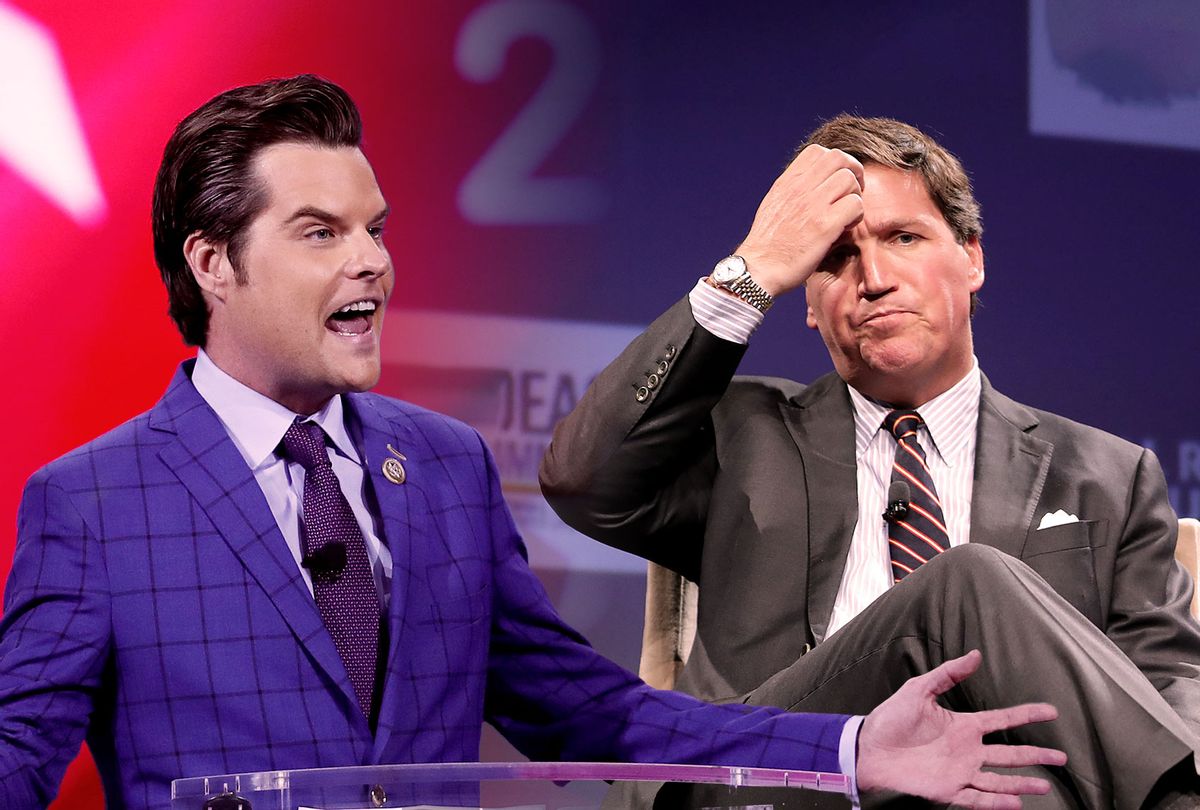 I'm not a fan of pro wrestling so I have never watched two grown men simultaneously try to throw each other out of the ring. But having watched the entire interview Fox News host Tucker Carlson held with Rep. Matt Gaetz, R-Fla., on Tuesday night, I now see the appeal. No one grabbed anyone by the shoulders — the two were not even in the same room — but it was nonetheless a riveting pas de deux of insinuation and attempted blackmail. It was a rare moment of comeuppance for two of the most ridiculous, yet sinister, figures in American politics, and impossible to look away from.

It was, in other words, great TV. And that is what Fox News is good at, turning politics into a campy wrestling match, devoid of meaningful content but full of stock characters locked in asinine conflicts. The network's instinct for good TV has elevated figures like Gaetz, a spoiled mediocrity who, in another time, would simply be a faceless grifter warming the congressional seat Daddy bought him, at least until the feds caught up to him. In our era, though, his combination of bottomless self-confidence and a rich kid-honed skill at being a remorseless bully turned him into an aspirational figure for the Fox News audience, a role model for the trigger-the-liberals crowd.

But, as Carlson learned  — with a chagrin he struggled to hide under his standard furrowed-brow fake concern face — the problem with prizing sociopathy in the people you elevate as figureheads is that often they turn their predatory gaze upon you. This is exactly what happened last night, when Gaetz, who the New York Times reports is under investigation in a federal sex trafficking probe involving a 17-year-old girl, decided that if he's going down, his buddy Tucker was coming with him.

"You and I went to dinner about two years ago, your wife was there, and I brought a friend of mine, you'll remember her," Gaetz said, rambling on about how his female friend was now supposedly being "threatened" by the FBI in a "pay-for-play scheme."

Carlson quickly denied remembering any such female friend and acted confused. The audience, however, picked up on what Gaetz was laying down.

Not that anyone should pity Carlson, who, along with the rest of the wretched propaganda network he works for, brought this on. They're the ones who turned Gaetz into a star, bringing this hairsprayed Donald Trump sycophant on-air at every opportunity. In her September 2019 profile of Gaetz for Mother Jones, Stephanie Mencimer reported that in "the past year, he has appeared more than 70 times on the network, and Sean Hannity has campaigned for him in Florida." Gaetz's presence on the network has not let up since then. Turn on Fox News any time, day or night, and you might catch the congressman spewing an endless stream of zany lies through lips set in a perpetual smirk. As never-Trump GOP consultant Steve Schmidt told Mencimer, "Being a sober, serious statesman is not the path to cable news stardom for members of Congress."

The saga that brings Gaetz to this moment is a complex one. Rachel Maddow of MSNBC laid out the background Tuesday night, detailing a sordid tale of Gaetz's close political ally, Joel Greenberg, a Florida tax collector who was investigated for corruption last year and then got hit with an array of charges, including sex crimes involving at least one minor. Now Gaetz himself is apparently under investigation. While the details of the investigation are still vague, notably, Gaetz went out of his way on Carlson's show to deny that "there were pictures of me with child prostitutes," a detail that is definitely not in the New York Times' reporting.

Hours before the New York Times piece was published, Gaetz appears to have leaked stories that he is considering resigning from Congress to take a job at right-wing cable channel Newsmax. When the story hit, Gaetz pivoted to a confusing explanation, which he first offered on Twitter and then on Carlson's show, about allegedly being blackmailed by "a former DOJ official." Whether that is true or not, it is worth noting that being the target of blackmail is hardly exonerating. On the contrary, it's generally understood that it's easier to blackmail the guilty than the innocent since innocent people typically have less to hide.

Whatever the truth of the matter is, however, it is the least surprising thing in the world that Gaetz, whose main personality trait is "chaos troll", would be caught up in something like this. Recklessness has been central to his brand from the get-go. His love of stunts and getting into trouble is why Fox News turned him into a star. Fox producers know that their audience is a sea of frustrated Twitter trolls who only wish they had Gaetz's impeccable talent at being the worst. The Tampa Bay Times, his local newspaper, called Gaetz an "entitled ne'er-do-well." It's made him a villain to liberals, but a hero to the Fox News audience, oriented as they are around the singular goal of "owning" the liberals.

Indeed, Gaetz is just one of many camera-thirsty jackasses who, pumped by the Fox News style of politics-as-pro-wrestling, are jockeying — with great success — to be the public face of the Republican Party. Trump, of course, is the most obvious, but the Republican caucus in the House of Representatives is now replete with people that Ben Mathis-Lilley of Slate described as "America's local ding-dongs and loose cannons," such as QAnon huckster Marjorie Taylor Greene, Hitler vacation home enthusiast Madison Cawthorne, and firearm fetishist Lauren Boebert. These elected representatives aren't interested in the boring work of governance, so much as they are what you might call "asshole influencers," here to shape the aspirations of people whose only political ideology is spite.

But, of course, the danger in elevating terrible people is they aren't particularly grateful to you for it.

Fox News made Gaetz, and this is how he thanks them, by trying to drag down their biggest star with him. It certainly was must-see TV, and no doubt Fox News producers are swooning for the ratings that Carlson's on-air humiliation garnered. But it was also a reminder that you can't drag politics down into the gutter without some sewage splashing on your expensively tailored suits. Carlson will probably survive this (though we can't say the same about Gaetz). Still, it was good to enjoy, if only for a moment, the Fox News host getting a strong taste of what he's been dishing out to the rest of the country for years.