Mark Meadows performed life-changing favors for Madison Cawthorn, then turned on him. Why?

Former North Carolina congressman and younger man who replaced him have a long history. Somehow it went south 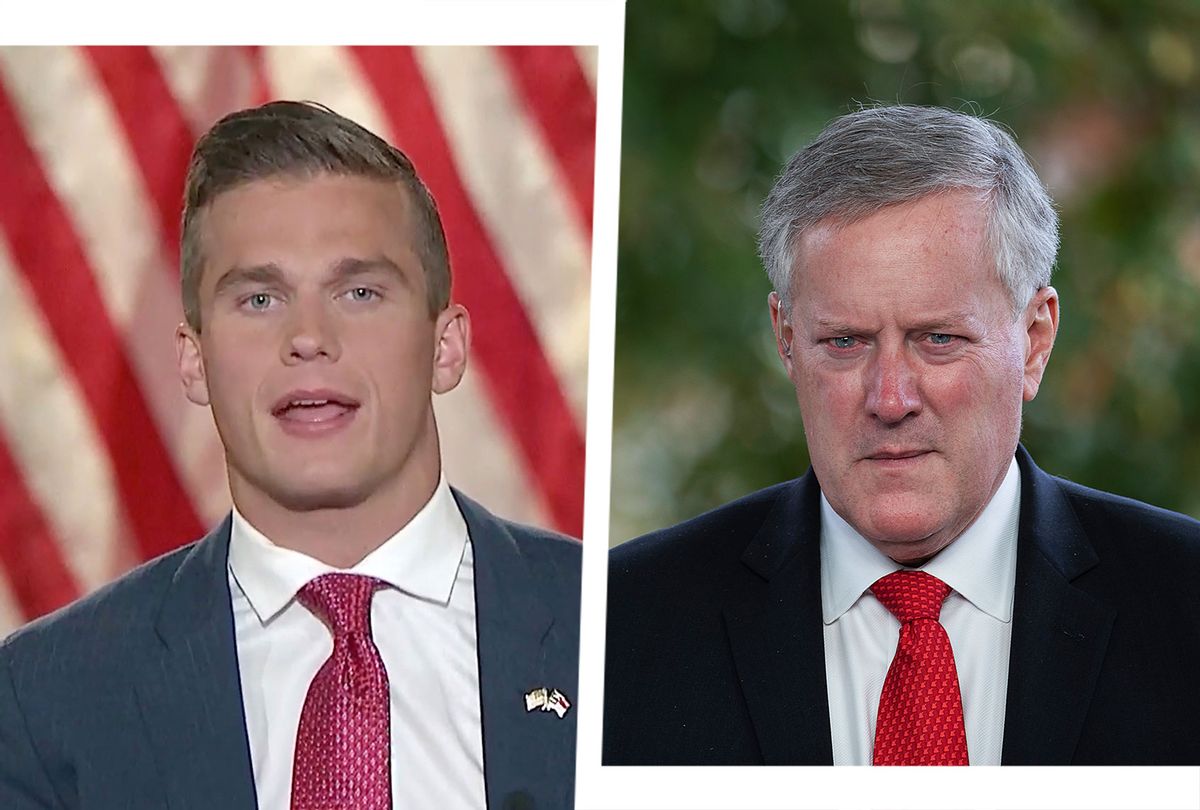 Last November, North Carolina Republican Madison Cawthorn became the youngest person elected to Congress in modern history, at age 24. He was homeschooled through high school, and does not hold a college degree. According to his own claims in a sworn deposition, his work experience as recently as two years before his congressional run was limited to a job at Chick-fil-A, along with a part-time gig in a district office of former Rep. Mark Meadows. He later supplemented that by creating a real estate entity that shares its name with a slogan often embraced by white nationalists.

Cawthorn claims the slogan is simply "a term for Rome."

Yet in the 2020 Republican primary for the seat that Meadows vacated when he resigned from Congress to become Donald Trump's White House chief of staff, Cawthorn beat out Meadows' handpicked successor, as well as a former top aide and old political hand. But perhaps even stranger, in a sense Cawthorn had to beat Meadows himself: The onetime leader of the House Freedom Caucus veteran went so far as to throw campaign funds and taxpayer resources — perhaps unlawfully — into an effort to defeat the young man who, by all appearances, just a couple of years prior had been his protégé.

Cawthorn's relationship with Mark Meadows and the Meadows family has shaped some of the most formative moments of the young conservative's life, including the 2014 car accident that left him partially paralyzed and in a wheelchair. Indeed, in the four years between 2013 and 2017, Meadows recommended Cawthorn for the U.S. Naval Academy; had his son, Blake Meadows, find a Florida attorney to handle Cawthorn's insurance case; hired Cawthorn in his congressional office; and apparently played a role in helping Cawthorn gain admission to Patrick Henry College, which he attended for just one semester, before dropping out with a self-reported D average.

The earliest clear connection between the two men emerged when Meadows nominated Cawthorn for admission to the Naval Academy in December 2013, five months the nearly fatal car accident in April 2014, which occurred as Cawthorn and his best friend were headed home from a spring break trip to Florida. Cawthorn has sometimes implied that his plans to attend the Naval Academy where derailed by his serious injuries. In fact as AVL Watchdog has revealed, Cawthorn has testified that the academy had already denied him admission on academic grounds before the April accident.

(According to sworn depositions, Cawthorn's friend fell asleep at the wheel, at around 5 p.m., about an hour into the first leg of their drive across Florida. The friend was unhurt, but Cawthorn, who allegedly fell asleep with his feet on the dash, was nearly killed.)

The crash precipitated a convoluted series of lawsuits that are still dragging out in court to this day: At one point, Cawthorn tried to sue his best friend for $30 million. According to court records, shortly after the crash Roger Cawthorn, Madison's father — who works as a financial adviser at Edward Jones, where Meadows and his wife have several investment accounts — had a heated conversation with an insurance adjuster that for unclear reasons left him uncertain about a promised $3 million settlement. The next day, the Cawthorns tapped the Meadows family to bring in extra legal firepower.

Under questioning in a 2017 court deposition, Madison Cawthorn claimed that after that contentious call, his mother told Mark Meadows' wife Debbie the details, in hopes that the Meadows family could help them find  a lawyer. Mark's son, Blake Meadows, a law school student at the time, contacted Florida attorney and leading Meadows donor Dean Colson on the Cawthorns' behalf, giving him a rundown of the injuries, the parties involved and the potential jurisdictional issues. Colson accepted and a firm partner took over Madison's case.

Several months after that, Mark Meadows offered Cawthorn a job in his district office. Cawthorn described the moment to The North State Journal, saying that at a Meadows victory party, the congressman got on his knees, at Cawthorn's eye level, and asked him to come work for him. Cawthorn told the publication that the job pulled him out of a dark place and convinced him, "I can still do this."

At the time, Meadows' office was facing personnel problems: His chief of staff, Kenny West, had been accused the month before of sexual harassment by multiple women. An internal investigation upheld the allegations in November, the same month Meadows offered Cawthorn the job. Meadows kept West on the team through the following spring, and paid him through August, a lapse in judgment for which Meadows was ultimately cited and fined $40,000 by the House Ethics Committee. The Tea Party conservative later told Congress that he had gone "back and forth, maybe longer than I should have" about cutting West loose, "wrestling with what was fair and what was not."

Cawthorn joined Meadows' staff in January 2015. In the meantime, he had rejected an initial settlement offer of $3 million in the injury case, in favor of a more aggressive suit that also involved his friend, the driver at the time of the crash. Meadows kept Cawthorn on the payroll part-time for the next full year, then paid him negligible sums through August 2016. During his 2020 campaign, Cawthorn falsely claimed that this was a full-time job that had lasted for two years. Wayne King, who served as Meadows' deputy chief of staff at the time, did not reply to Salon's request for comment. (After what a source close to Meadows and King described as a falling-out, King himself ran unsuccessfully against Cawthorn in the jam-packed 2020 GOP primary. After this article ran, King told Salon that he and Meadows have a strong relationship.)

It's unclear what specific work Cawthorn did for Meadows, and unclear whether in that time he ever discussed Kenny West's behavior with Meadows or with other staffers.

One senior aide at the time, Alyssa Farah, had run communications for Meadows and the House Freedom Caucus, and went on to serve in the Pentagon and later with Meadows in the White House. Farah had studied journalism at Patrick Henry College, a small, nondenominational Christian private school in Purcellville, Virginia. She graduated in 2011, overlapping with Blake Meadows, the congressman's son. In 2018, Mark Meadows himself gave the commencement address at the college.

In the fall of 2016, Cawthorn himself matriculated at Patrick Henry College. He paid his own way and bought a house in the area for cash, but dropped out after just one semester, saying his failure was caused by "heartbreak." He also said that cognitive impairment from his brain injury made academic life difficult, and that his grades were poor.

Last October, weeks before the general election, more than 150 of Cawthorn's former fellow students at Patrick Henry — roughly half the school's total student body — wrote a letter alleging that his during his brief stint there he had engaged in "sexually predatory behavior," lied habitually and committed vandalism.

"Cawthorn's time at PHC was marked by gross misconduct toward our female peers, public misrepresentation of his past, disorderly conduct that was against the school's honor code, and self-admitted academic failings," the letter said. His former classmates described him as a "sexual predator" who often asked women to go for "joy rides" in his Dodge Challenger, during which he would drive them "to secluded areas, lock the doors, and proceed to make unwanted sexual advances."

"It is a pattern of predatory behavior," one of the authors told Blue Ridge Public Radio. "People say that he's in a wheelchair and ask, how could this be? But when you're in his car with him and he locks the door, there's no escape."

Coming off his "heartbreaking" experience at Patrick Henry, Cawthorn filed another lawsuit against the auto insurance company, Auto-Owners, claiming they had acted in "bad faith" and demanding $30 million, in addition to the $3 million he had already been paid. The next year he put some of his money toward a European vacation that included a trip to Adolf Hitler's vacation home, a spot that Cawthorn had said was on his "bucket list," referring to Hitler as "the fuhrer."

Somewhere around that point, Meadows' and Cawthorn's paths seemed to diverge, and Meadows apparently fell into increasing financial distress. When they converged again, in late 2019, it was with a vengeance: Meadows announced his surprise retirement from Congress in December and threw his political clout behind Lynda Bennett, a close friend of his wife's, as his successor. In fact, Meadows' brother had already registered the domain for her campaign two months prior. His eleventh-hour retirement announcement, coming just before campaign filings were due, forced Republican hopefuls to scramble and gave rise to accusations that Meadows had sandbagged the field to favor his surrogate — but Cawthorn and former top aide Wayne King both managed to get in under the wire. Over the next several months, as Salon first reported, Meadows acted as a silent booster for Bennett against his old friends.

In a cryptic Facebook post from February 2020, Cawthorn shared a photo of Blake Meadows, Mark's son, allegedly speaking at a Cawthorn campaign event.

"So thankful for one of my closest friends, Blake Meadows, coming all the way out to the Ag Center to help with the campaign," Cawthorn wrote. "Your prayer was awesome, brother, thank you!"

Cawthorn easily beat Bennett and King, despite Meadows' increasingly desperate and apparently unlawful support for Bennett — including an endorsement from former President Trump — then won a comfortable victory in the deep red district in November.

It's unclear what relationship the two men may have today. Salon's requests for comment to Cawthorn and Mark Meadows did not receive responses. Debbie Meadows appeared to return Salon's call using a blocked number, but declined to answer questions.

CORRECTION: An earlier version of this article reported that Roger Cawthorn, the father of Rep. Madison Cawthorn, was a financial adviser to Mark Meadows' family. Although Roger Cawthorn works at Edward Jones, the investment firm where the Meadows family holds investment accounts, additional reporting has clarified that he does not serve as their adviser. The story has been updated.