Why Noam Chomsky is surprised by Joe Biden's presidency 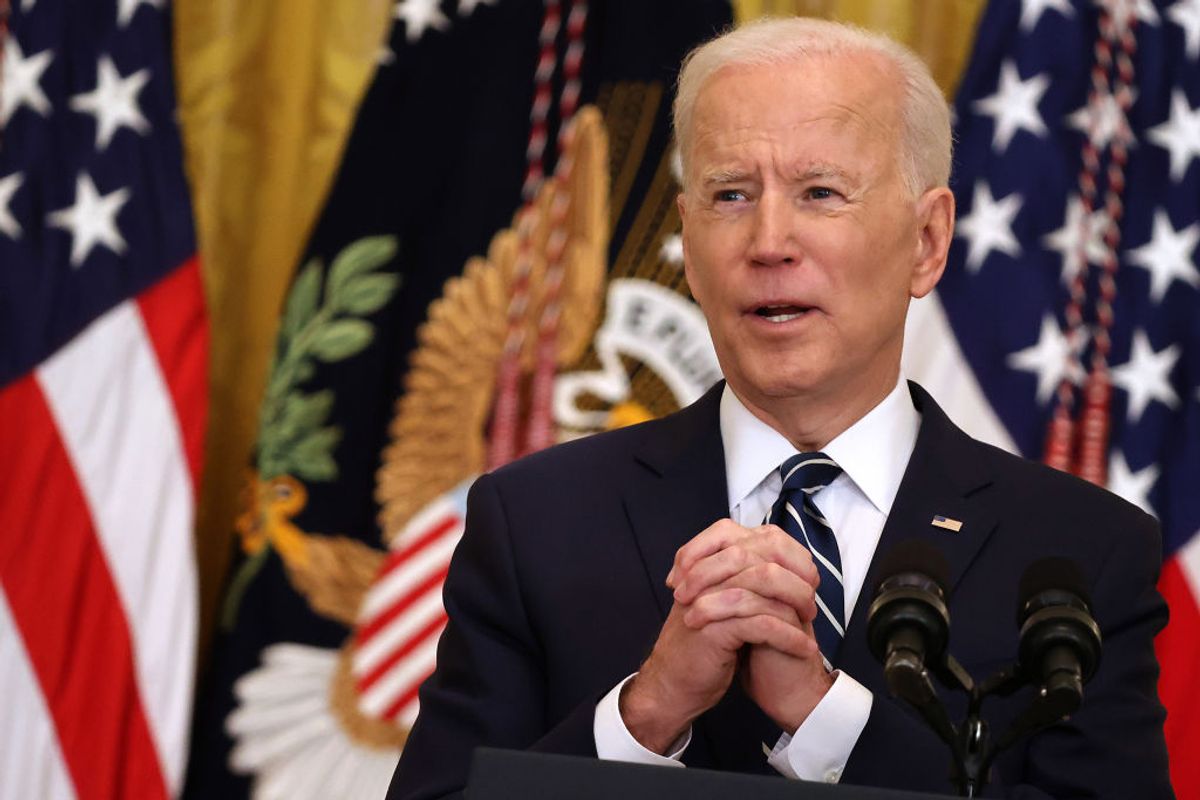 President Joe Biden talks to reporters during the first news conference of his presidency in the East Room of the White House on March 25, 2021. (Chip Somodevilla/Getty Images)
--

Although left-wing author Noam Chomsky has often been highly critical of the Democratic Party over the years — including President Joe Biden — he was hoping for a Biden victory in the 2020 presidential election and warned that then-President Donald Trump would become even more dangerous if he won a second term. Chomsky, now 92, got his wish: Biden won, and Chomsky discussed some of the challenges of the Biden era during a March 15 interview with Alternative Radio's David Barsamian.

The author has been promoting his new book, "Consequences of Capitalism: Manufacturing Discontent and Resistance" — which he co-wrote with University of Arizona colleague Marv Waterstone. Chomsky and Barsamian covered a lot of ground during the interview, from voting rights to Biden's presidency to the January 6 assault on the U.S. Capitol Building.

On January 6 — when Trump had only two weeks left in the White House — a violent mob of his supporters invaded the U.S. Capitol Building in a failed attempt to stop Congress from certifying Biden's Electoral College victory. When Barsamian asked Chomsky to discuss the events of January 6, he replied, "First of all, it was explicitly an attempt at a coup."

Chomsky continued, "They were trying to overthrow the elected government: that's a coup. As for those who participated, one striking feature — look at the photographs — is that few young people were involved. That's quite unusual; political events and demonstrations are mostly young people. Here it was middle-aged and older people, and they were all enthusiastic Trump supporters. He was egging them on."

The author warned that the fanaticism of the January 6 rioters should not be underestimated.

"They all apparently fervently believe that the election was stolen, that their country is being stolen from them by evil forces," Chomsky told Barsamian. "Remember, almost half of Republican voters think that Trump was sent by God to save the country from evildoers ranging from Democratic pedophiles to minorities to others who are undermining and destroying their traditional Christian form of life. There were elements there from the more violent militias, such as the Proud Boys. It was a pretty violent affair. Five people were killed; it could have been much worse."

Chomsky added that although Trump and Senate Minority Leader Mitch McConnell "personally can't stand each other," they "have a common interest: to ensure that the country is ungovernable — that Biden can't achieve anything."

At Fox News, Newsmax TV and other right-wing media outlets, it isn't uncommon to hear centrist members of Biden's administration described as "far-left socialists." But to someone who really is decidedly left-wing such as Chomsky, that characterization of Biden or Vice President Kamala Harris is laughable. However, Chomsky has a generally favorable view of Biden's two and one-half months as president.

"I must say that what Biden has done so far is a rather pleasant surprise to me," Chomsky told Barsamian. "It's better than I would have expected. He's pretty sharply criticized on the left for flaws and omissions in the domestic policy; these criticisms are, in my view, correct but a little bit unfair. There's only so much you can do when half of the Senate is — no matter what you say — is going to be 100% against it."

Chomsky, during the interview, addressed the "major Republican assault on voting rights" and Democratic efforts to counter it via House Resolution 1, a.k.a. the For the People Act — a voting rights bill that was recently passed by the U.S. House of Representatives but now faces in a steep uphill battle in the U.S. Senate because of the filibuster. The author doubts that Democrats will be able to get rid of the filibuster. And he lamented that although Republicans are a "minority party," they have a "structural advantage" over Democrats in elections.

Chomsky told Barsamian, "The Democratic voting base is mostly concentrated in cities. That means that a lot of the votes cast in our parliamentary system are just lost. If 80% of the votes for a candidate are cast in one place, 30% of them are essentially lost. Republican votes, by contrast, are scattered in rural counties and in small states that have representation far beyond their population. All of this gives the Republicans a structural advantage: they can win an election even if they lose the vote by 4 or 5%."