It's finally spring — and time to eat outdoors: Remember what that was like?

Gather your friends, take off your masks, scatter around the yard, and chow down on my delicious rice noodle salad 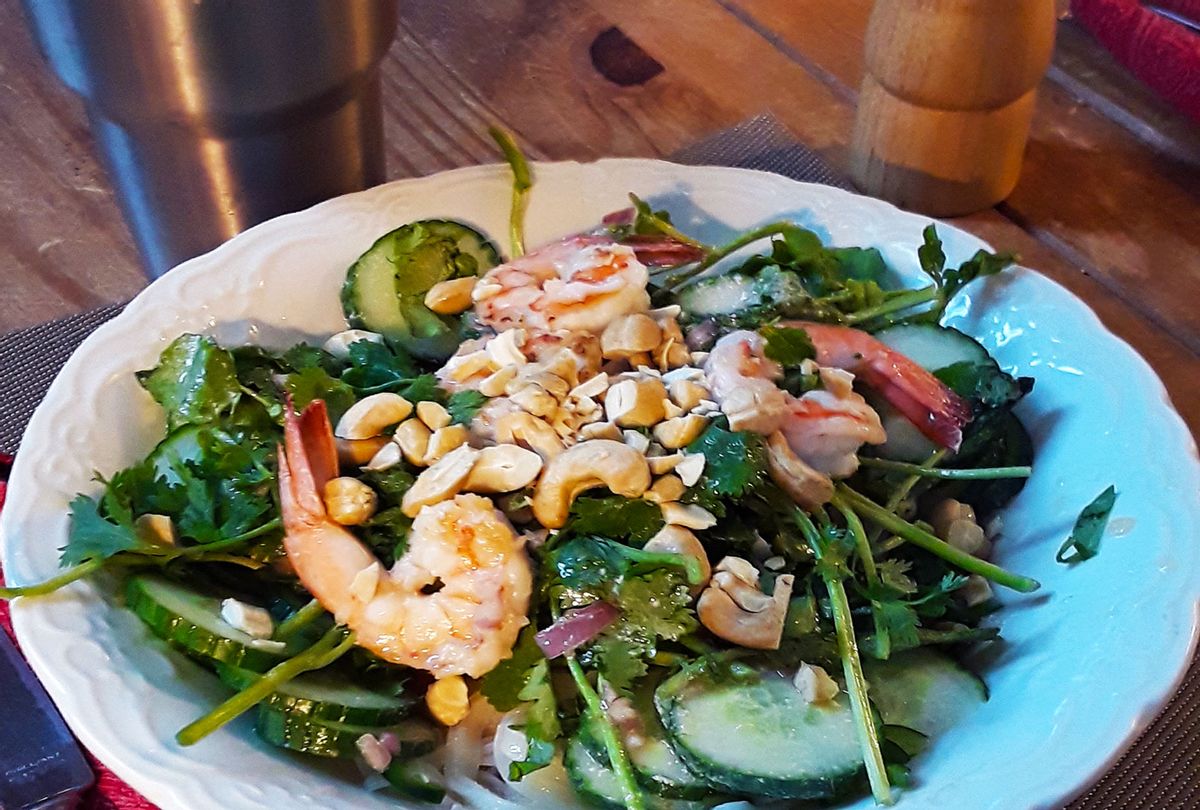 It's spring on Long Island, the sun is out, the air has warmed, the trees are in bud and the waters are rippling in a gentle breeze. It's a time, in short, when one's thoughts turn to dining outdoors. It's a ritual I've followed since I lived out here in the '70s, when I was but a pup writer pounding away at night on High Street in Sag Harbor on my first novel.

When the weather began to warm, as it is right now just outside my open door, I used to throw an old galvanized bucket in the back seat of my $400 1964 Cadillac convertible and drive over to a bay beach and dig in the wet sand of the low tide for steamer clams. I had a spot I used to call the "clam condo," there were so many of the things along a short stretch of beach that separated the bay from a reedy salt marsh that held another local delicacy, the Peconic Bay oyster.

I'd walk along the beach until I saw the tiny holes in the sand that usually indicate the presence of steamers, and then I'd use a garden trowel to get a depression started in the wet sand. I'd wait for the depression to turn itself into a hole as it began to fill with bay water, which I splashed against the sides of the hole, causing little sand-slides and exposing the steamer clams. They seemed to stand in a line, right next to each other, vertical in the sand with their necks extended upwards, creating the little holes you could see on the surface as they filtered the bay water and pushed it through their necks into the air.

Sometimes a cloud would block the sun and it got chilly as a breeze blew across the beach from the water, but I'd keep digging, waiting for the sun to peek around the cloud and warm up my back. That was one of the things about spring clamming: Your back could be hot from the sun at the same time your legs and feet were freezing from the cold sand and lapping bay water. But the reward of spring clamming was a bucket of steamers! I'd wade into the freezing bay and rinse them a couple of times in clear water and then leave enough water in the bucket to cover them so they could flush whatever sand was left from themselves.

And then it was home to High Street to steam them and serve to friends who I'd call to stop by while the sun was just going down and it was still warm enough to sit around outside in my tiny yard. We would dip the steamers in melted butter and savor their delicate, salty sweetness accompanied by a loaf of crunchy French bread and maybe an ice cold beer.

It's still possible to go clamming out here, and to gather mussels along the edges of Accabonac Harbor, near where I live these days in the village of Springs. The county published a map recently marking parts of the bays which will be closed to shellfish gathering during the summer, due to pollution caused by fertilizer run-off and poorly installed or badly maintained septic systems. But everything is open right now, and the harbor will remain mostly open over the summer. I've located a mud flat that's exposed at low tide for clams, and I know exactly where the mussels are, so there will be some shellfish suppers this year, for sure.

But you don't need to live near a bay beach, or even close to one of the coasts, to take your dining outdoors as it warms up, which is especially exciting this year as we begin to ease our way into some semblance of normalcy after losing a whole summer to COVID restrictions. Even if you're not a vaccinated geezer like me, by Memorial Day everyone will be able to get their shots and start gathering outdoors with minimal masking.

If you're not enjoying it already, it will soon be time to round up your friends and — with a little appropriate social distancing — indulge in some fresh air feasting. It's already getting warm enough for outdoor grilling, so throwing burgers and steaks and chicken on the fire will of course be one way to enjoy our new freedoms. But I've got a favorite spring and summer salad that's perfect for outdoor dining, All it takes is a quick trip to the supermarket for any ingredients you don't already have, and inside of an hour you can be ready to serve it to your friends in your yard or on a balcony or even on a bench in the park with a date you're eager to impress.

It's a rice noodle salad with a ginger-coconut-lime dressing. We like it with cooked and peeled shrimp, cut in half down the centerline, but you can serve it with sliced steak or chicken or even flash-fried ground pork. So here it is, courtesy of a slightly modified three-year old recipe from Bon Appetit magazine:

Cook the noodles in a pan of boiling salted water. They should be cooked beyond al dente since they are served cold. Drain and rinse under cold water, then and drain again.

In a large bowl, toss together noodles, cucumber and watercress with about three-quarters of the dressing. Add in shrimp, sliced steak, cooked chicken or flash-fried ground pork and continue to mix.

Serves two on plates topped with chilis, nuts and cilantro and drizzled with the remaining dressing.

The dressing can be made as early as one day ahead and kept in the refrigerator. Shrimp, chicken, steak or ground pork should be cooked just before serving.

Sit back, eat heartily and enjoy the outdoors!