Ernest Hemingway was a lifelong anti-fascist persecuted by the FBI. New miniseries erases that history entirely 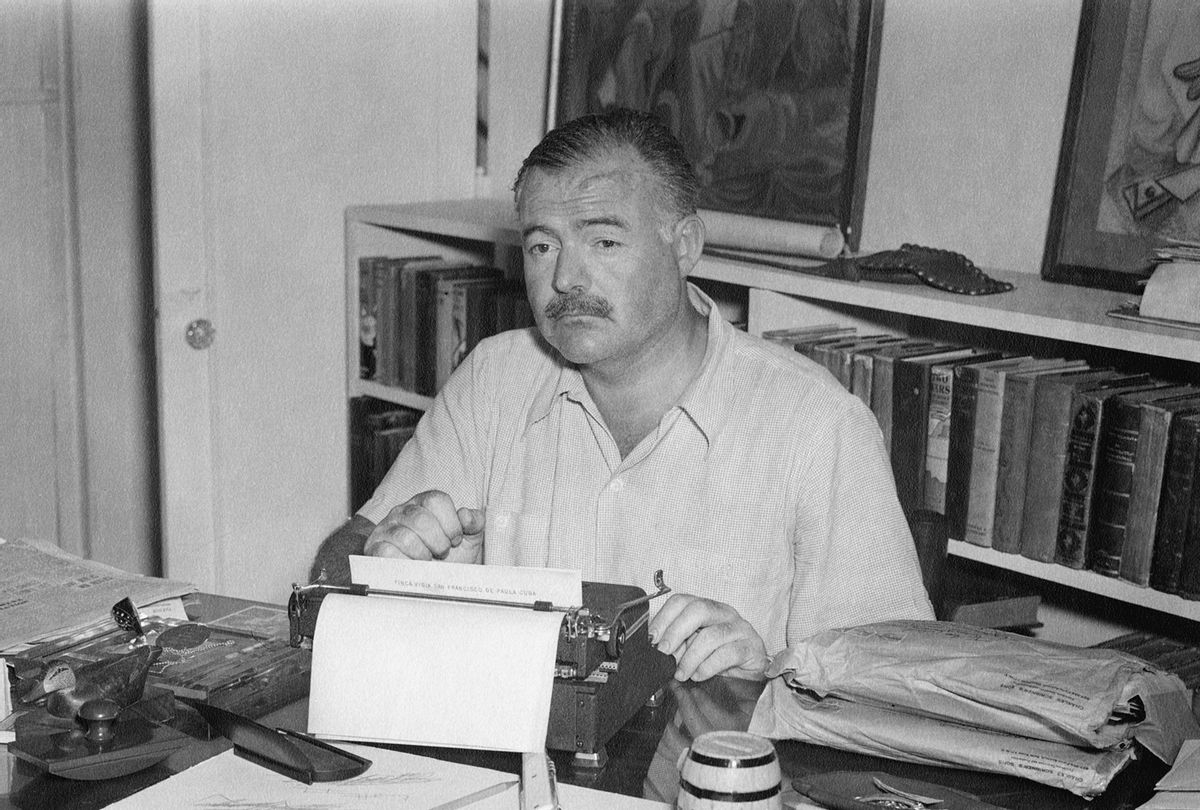 Ernest Hemingway committed suicide in 1961. Judging by the mean-spirited, petty and lazy PBS documentary series "Hemingway" that Ken Burns made with collaborator Lynn Novick, that's the same year in which Burns' brain is permanently frozen. The master of the PBS yawn appears to live in a world where the mentally ill are worthy of hatred, little is known about how severe concussions damage the brain and alter personality, and Google, does not exist.

While documenting the legendary American author's descent into paralytic depression in the third episode of the series, Burns and Novick fail to even mention that many medical experts and literary scholars believe that Hemingway suffered from untreated hemochromatosis — a condition causing the body to produce excessive amounts of iron. Symptoms include debilitating pain, exhaustion and memory loss, all of which Hemingway displayed, and made worse with his heavy drinking.

While chronicling the years leading up to Hemingway's suicide, the documentary series drops several references to the nine concussions that Hemingway endured throughout his life, but never interviews a neurologist who might have explained what is now common knowledge, especially in the wake of disturbing studies of the brains of deceased NFL players — chronic traumatic encephalopathy, or CTE, often caused by repeated concussions, can lead to loss of cognitive function, and often transforms its victims into abusive malcontents.

Instead of considering how anyone might feel and behave while struggling with hemochromatosis, depression, brain damage and alcoholism, all while receiving little to no medical intervention, Burns and Novick are content to cast Hemingway as a narcissistic bully. Crucial to their presentation of Hemingway as a loathsome and delusional figure is the inclusion of his intense concerns that the FBI was surveilling him. Hemingway's suspicion that two men in a Ketchum, Idaho, restaurant were federal agents, and that men working in the local bank after hours were scrutinizing his finances, are treated as nothing more than the psychotic ravings of a lunatic.

On the issue of the FBI, and Hemingway's politics more broadly, Burns and Novick manage a surprising achievement — they outperform the dishonesty they exercised when presenting Hemingway's health problems.

In the 1980s, Jeffrey Meyers, a Hemingway biographer and professor at the University of Colorado, filed a Freedom of Information request for the FBI's file on Hemingway. He was received more than 100 pages of documents, 15 of which were redacted. The file included longtime FBI director J. Edgar Hoover's order to monitor Hemingway, details of plans to tap his phones and even information on how Hemingway's doctor at the Mayo Clinic was reporting on the author's condition to the FBI field office in Minnesota. There are also memos from agents offering proposals for how the bureau could destroy the beloved writer's public reputation.

In an appalling act of journalistic malpractice, the Burns and Novick series never even mentions the FBI file. Meyers is alive and well in California, but does not appear in the documentary.

Burns did interview the late A.E. Hotchner, a journalist and longtime friend of Hemingway who wrote three books on the author, but never acknowledges that Hotchner expressed remorse over not taking Hemingway's claims of FBI surveillance seriously. The exposure of the FBI file led Hotchner to write that he "regretfully misjudged" his friend's fears, and that the FBI's persecution of Hemingway contributed to "his anguish and suicide."

In fact, Hemingway first drew the attention of the FBI decades earlier, because of his support for the Republican (i.e., socialist) government in Spain during the Spanish Civil War. Hemingway collaborated with left-wing filmmaker Joris Ivens to make "The Spanish Earth," a 1937 documentary rallying support for the democratically elected Republicans. Hoover denounced Hemingway as a "premature anti-fascist" — a bizarre but accurate label of the author's lifelong political commitment to the destruction of fascist forces.

Three years later, Hemingway signed a public letter protesting the FBI arrest of Americans in Detroit who were violating the Neutrality Act by encouraging enlistment for the Republican cause

Contemptuous of dissent and unable to distinguish between anti-fascism and pro-communism, Hoover and Raymond G. Leddy, an FBI agent stationed in Cuba, described Hemingway in internal memos as "dangerous" and likely to "stir up trouble." For his part, Hemingway referred to the FBI in 1942 as the "American gestapo."

Hemingway put his life on the line several times in service to democracy: First as an ambulance driver for the Red Cross in World War I, where he was shot and sustained his first concussion, and next as a wartime correspondent in the Spanish Civil War. Hemingway also reported on World War II, and while in France took up arms alongside U.S. soldiers against the Nazis. Even though it is illegal for a noncombatant to join wartime fighting, the military awarded Hemingway the Bronze Star in recognition of his courage. Burns and Novick never mention this.

They also never discuss the "Crook Factory" — an anti-fascist spy network that Hemingway organized in pre-World War II Cuba to discover whether any influential Cubans were secretly sympathetic to fascism. That might sound like the premise for an implausible thriller, but in fact the U.S. embassy in Havana paid Hemingway a monthly stipend to lead the effort. When he began reporting on their results, the FBI grew livid. Meyers, after reviewing the extensive FBI documentation, writes that Hoover and other FBI leaders saw the Crook Factory as a "rival company" that should be "put out of business."

Moving forward to the late 1950s and early '60s, anyone with even a cursory knowledge of 20th-century history understands that the U.S. government wanted nothing more than to put Fidel Castro and the Cuban revolution "out of business," after the rebels drove out the corrupt pro-American regime of military dictator Fulgencio Batista. Hemingway, on the other hand, was a passionate supporter of the revolution.

The Burns documentary mentions only in passing that Hemingway saw hope and promise in the Cuban revolution, but his political engagement extended much further than that. According to Nicholas Reynolds, the author of "Writer, Sailor, Soldier, Spy: Ernest Hemingway's Secret Adventures, 1935-1961," Hemingway provided financial aid to Cuban revolutionaries, and gave Castro meticulous advice on how to handle the American press. Castro and Hemingway met just once, in May of 1960, but numerous photographs of that encounter are available with a brief Google search. None appear in Burns' documentary, nor is Reynolds among its sources.

Burns and Novick also failed to interview Norberto Fuentes, a journalist and friend who wrote the 1984 book "Hemingway in Cuba," and who claims that Hemingway eventually hoped to write a book about the Cuban revolution. He certainly told reporters on several occasions that he supported Castro's revolution, and refused to denounce the Cuban leader when the U.S. government demanded he do so.

Just as Burns and Novick diminish Hemingway's heroism in the face of fascism, and provide cover for the FBI's violation of his civil rights, they also distort his larger political history. While "Hemingway" includes the author's declaration that "all the state has ever meant to me is unjust taxation," making him sound like a right-winger, it never mentions that he supported Socialist Party candidate Eugene V. Debs for president in 1920, and often told friends that Debs was the only candidate in his lifetime worthy of such a vote. He did, however, tell friends that of all the politicians in the 1932 presidential race — including Franklin D. Roosevelt — he was most favorable to Norman Thomas, another socialist.

Burns and Novick recycle the familiar claim that Hemingway's first writing job was as correspondent for the Kansas City Star. This is also untrue. Before writing for the newspaper, he accepted a job with the official publication of the Co-Operative Society, an organization that aimed to build solidarity between farmers and urban workers in support of the labor movement. David Crowe writes brilliantly about Hemingway's politics, focusing mainly on his early years, in "Hemingway and Ho Chi Minh in Paris: The Art of Resistance." Crowe is also missing from the Burns farce.

The program devotes all of 30 seconds to Hemingway's only novel set in the U.S., the overtly political "To Have and Have Not." No one would claim it's among Hemingway's best books (the film adaptation starring Humphrey Bogart and Lauren Bacall is far better known). But the story of a dispossessed worker desperate enough to run contraband from Cuba to the Florida Keys does provide insight into Hemingway's politics, particularly the protagonist's excoriations of capitalism and his dying condemnation of individualism: "No matter how a man alone ain't got no bloody fucking chance."

I'm not suggesting that Hemingway deserves hagiography. He was undeniably a complicated and difficult man. But in failing to demonstrate any compassion for his physical ailments and mental illness, lying about the FBI's desecration of his civil liberties and distorting his lifelong leftist politics, Burns and Novick are effectively carrying water for J. Edgar Hoover.

A truthful look at Hemingway's life would examine the genius accessible in his writing, document the tragedy of his decline and death and wrestle with his numerous flaws. It would also illustrate his public devotion to human freedom, and his eternal literary alliance with the underdog. The evils of the U.S. national security state, ever zealous to monitor, defame and destroy anyone it viewed as dangerous or uncooperative, would emerge as dark contrast.

"The most essential gift for a good writer," Ernest Hemingway once explained, "is a built-in, shock proof shit detector." He also asserted that a "writer without a sense of justice and injustice would be better off editing the yearbook of a school for exceptional children." Given the total absence of a "shit detector" in their miniseries, perhaps Burns and Novick should seek out a new occupation.