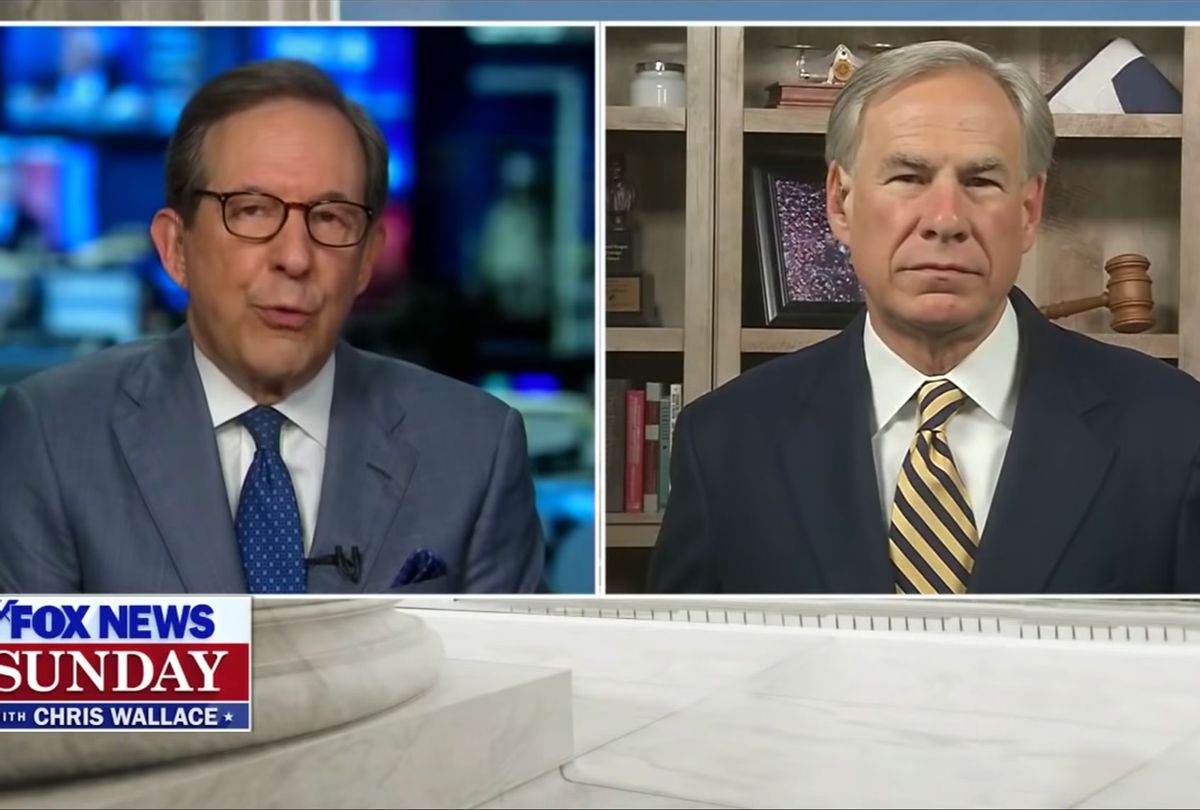 Fox News anchor Chris Wallace challenged Tex Gov. Greg Abbott in an interview on Sunday, pressing him on why he was silent about child migrant abuse at the border under former President Trump and has only just now started talking about the issue during the Biden administration.

"You made news this week reporting that there are cases of sexual abuse at the Freeman Coliseum in San Antonio, Texas, that houses right now more than 1600 children," Wallace said to Abbott. "But the head of a nonprofit that provides legal services to immigrants said this: 'The only reason why Abbott is now acting like he cares about the children in these facilities is for political reasons.'"

Wallace continued, "Governor, there were thousands of complaints of sexual abuse at migrant shelters during the Trump years. Not to say that what's going on now is right but we couldn't find one instance of you complaining and calling that out when President Trump was president."

Abbott did not directly address Wallace's question, instead vaguely citing "multiple differences between what happened in the Trump administration" and the Biden administration.

The interview comes just after a bombshell press conference last week in which Abbott revealed that he'd received tips of child abuse –– some detailing sexual abuse –– at the Freeman Expo Center in San Antonio. "In short, this facility is a health and safety nightmare," Abbott told reporters at the time. "The Biden administration is now presiding over the abuse of children."

Last Wednesday, Sen. John Cornyn, also a Republican from Texas, called for a federal probe into allegations of migrant children being abused at Freeman Expo Center.

"Unaccompanied children that arrive at our border have already endured dangerous conditions at home and a treacherous journey to get here," Cornyn said in a statement. "The fact that any child would experience abuse in the care of the U.S. government is despicable. The HHS Inspector General must fully investigate these allegations and the treatment of children at this facility."

According to Fox News, Cornyn has visited four detention facilities housing unaccompanied minors in recent days and plans to visit more. In late March, Cornyn and Sen. Ted Cruz, R-Tex., visited a border facility together, leading a tour of 17 GOP Senators at McAllen border. Cruz likened the facilities to "outdoor holding pens" and alleged that he'd seen smugglers helping people across the border. "Our policy is when they smuggle them in, the Biden administration releases them, and more and more and more," Cruz said in a video. "This is a humanitarian crisis, it's a public health crisis, the immigrants who are being released, they're testing positive for COVID-19 at a seven-times higher rate than the American population, and it's a national security crisis."

Last month, Homeland Security Secretary Alejandro Mayorkas said that the U.S. is expected to see the highest influx of migrants detained at the Southern border in two decades. Republicans have blamed the recent surge on the Biden administration's allegedly lax immigration policies, as Salon reported last month. Meanwhile, Democrats have been quick to castigate vocal Republicans who were otherwise silent on the matter during the Trump administration.

"In the last nine months of Trump's presidency there was a 690% increase in unaccompanied minors encountered by CBP, former Rep. Julian Castro, D-Tex., tweeted. "There's been a 61% increase under President Biden. How come we didn't hear a peep from you until now?" Rep. Veronica Escobar, D-Tex., echoed Castro: "Their immigration strategy is exactly the same thing as their Covid strategy. Do nothing. Just let people die. P.S. @GOPLeader stop using my community as your prop."

The Biden administration has refused to call the situation at the border a crisis. Last month, the President defended his immigration policies, attributing the recent spike at the border to seasonal patterns of immigration. "The truth of the matter is, nothing has changed. As many people came — 28 percent increase in children to the border in my administration. Thirty-one percent in 2019 before the pandemic in the Trump administration," Biden recently said. "It happens every single solitary year. There is a significant increase in the number of people coming to the border in the winter months of January, February, March — it happens every year."

Back in 2019, the New York Times found that the federal government received 4,500 complaints detailing the sexual abuse of migrant children at detention facilities in the span of four years. These complaints saw a marked rise during the Trump administration's border separation policy. According to a recent report by the Times, 20,000 migrant children are in government custody, with this number projected to be at 35,000 by June.