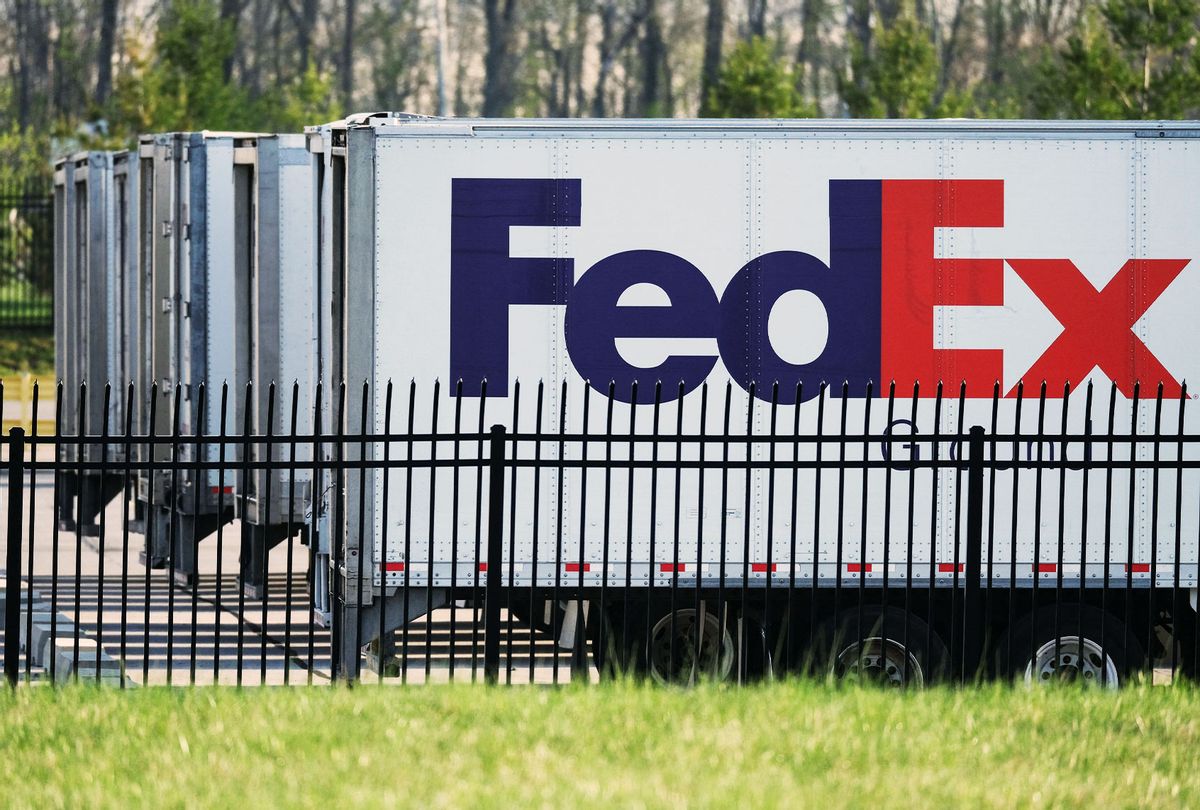 FedEx trailers are parked at the site of a mass shooting at a FedEx facility in Indianapolis, Indiana, on April 16, 2021. - At least eight people were killed at the facility late April 15 by a gunman, who is believed to have then turned the gun on himself, police in Indianapolis said. Four people with gunshot wounds were transported by ambulance, including one in critical condition, police said. Three were transported with other injuries, while two were treated at the scene and then released. (JEFF DEAN/AFP via Getty Images)
--

"We can't afford to wait as innocent lives are taken," White House press secretary Jen Psaki said Friday, noting that on the 14th anniversary of the Virginia Tech mass shooting, when a gunman killed 32 people, President Biden was informed of another mass shooting, at least the 45th across America in the last month.

A gunman opened fire and killed eight people on Thursday in an Indianapolis FedEx facility just before dying by suicide, according to local officials. Officers reportedly arrived on the scene at around 11pm. Indianapolis police Deputy Chief Craig McCartt told CNN that when they got there, it was "a very chaotic scene, with victims and witnesses running everywhere." He speculated that the gunman killed himself around when officers encountered him.

Levi Miller, a witness, told WTHR-TV that he heard multiple gunshots as he was working a shift inside the warehouse. "I see a man come out with a rifle in his hand and he starts firing and he starts yellin' stuff that I could not understand," Miller said. "What I ended up doing was ducking down to make sure he did not see me because I thought he would see me and he would shoot me."

McCartt said the shooter drove up to the building and immediately began shooting as he entered the warehouse. "He did not get very far into the facility at all," he said, adding that the shooting likely lasted no more than one or two minutes. According to police spokesperson Genae Cook, five people are still hospitalized, and one of them is critically injured.

Authorities have not yet identified the identity and motive of the killer. On Friday, McCartt told NBC that he knew "very little" about the investigation. "We're still trying to ascertain the exact reason and cause for this incident," Cook echoed.

FedEx is reportedly working with authorities to gather more information. "We are deeply shocked and saddened by the loss of our team members following the tragic shooting at our FedEx Ground facility in Indianapolis," the company said in a statement. "Our most heartfelt sympathies are with all those affected by this senseless act of violence."

Indianapolis mayor Joe Hogsett also expressed his condolences. "This morning, Indianapolis residents are confronted with the horrific news of yet another mass shooting, an act of violence that senselessly claimed the lives of eight of our neighbors," he tweeted on Friday. "As law enforcement works to learn more about this tragedy, our prayers are with the families of those whose lives were cut short."

The tragedy is just the latest in a spate of mass shootings in recent weeks. Back in March, eight people were slain in three different Atlanta-area spas. Many argued that the rampage was anti-Asian hate crime. Later that month, a gunman killed ten people at a grocery store in Boulder, Colorado. March also saw another shooting in which four people were slain at a real estate office in Southern California. According to the Gun Violence Archive, just this year, Indianapolis residents have been victims in three of the twelve deadliest shootings throughout the country.

"We can't afford to wait as innocent lives are taken," Psaki said on Friday. "There's more we can do and must do," she said. "The Senate should take up and pass the three bills, strengthening background checks, that passed the House with bipartisan majorities and have the overwhelming support of the American people. They should heed the president's call to pass a ban on assault weapons and high-capacity magazines and an immunity for gun manufacturers."