Pat Robertson is wrong: Police use of Tasers, like guns, constitutes excessive force

Less-than-lethal is the wrong standard 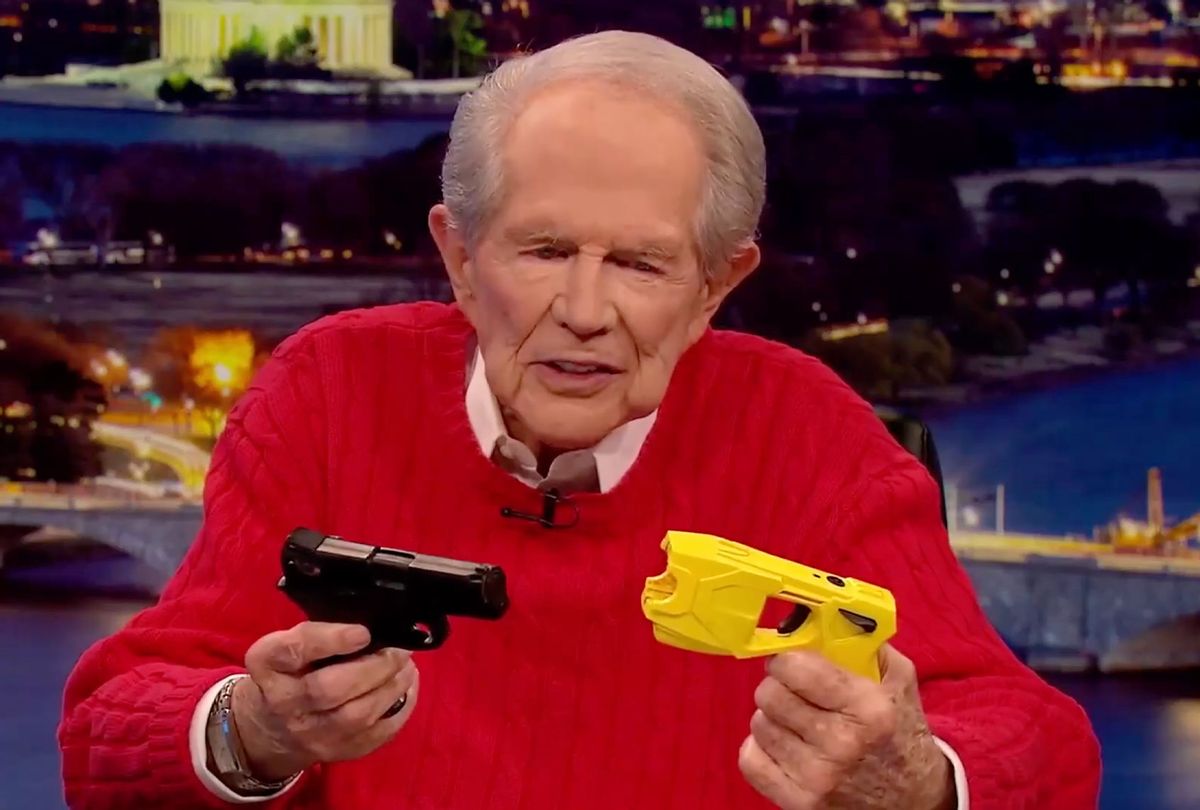 It's been another awful week of gun violence, including at the hands of police.

Last Sunday, Daunte Wright was pulled over for a minor traffic stop in Brooklyn Center, Minnesota, and was shot and killed by police officer Kim Potter. He was unarmed. We can't even count the number of times this has happened in our country, undoubtedly many more than have been documented. Until the proliferation of cell phones and police body cams, this incident could easily have been turned into a he-said-she-said that could never be proven one way or another.

This particular shooting does have a special twist to it, however.

When Wright got back into his car without permission, the police at the scene became extremely agitated. Potter warned Wright that she was going to use her Taser on Wright and immediately yelled "Taser! Taser! Taser!" as she shot her weapon. Only the weapon wasn't a Taser, it was her service pistol. Wright's foot hit the gas and Potter said "Holy shit, I shot him." The car rolled down the street a ways before veering off the road, with Wright dead in the front seat.

Many people have asked how anyone could have mistaken the Taser for a Glock pistol. It's made of yellow plastic, it has led lights on the back and it is carried on the opposite side of the officer's dominant hand which is reserved for the sidearm. None other than Pat Robertson, of all people, expressed skepticism that anyone could make such a mistake:

It does seem impossible that any experienced police officer could make such an error. Potter was not just any cop either. She was a two-decade veteran who was on that very day training new officers on the job. Her husband, who retired in 2017, had been a police instructor in the use of force, Tasers and crowd control. How could she have failed to reach across her body to grab the Taser instead of reaching down for her gun? Part of the reason is that despite what Pat Robertson says, Tasers are actually designed to have the feel of a gun and mostly because police officers demanded it.

According to this piece by James D. Walsh in New York Magazine, back when Tasers were first being deployed a couple of decades ago the manufacturers had a number of designs they could have used, such as a flashlight-shaped object with a thumb trigger. But they queried police departments on the subject and police liked the familiarity of the style and look of the gun so that was that. Since then there have been some changes such as the use of yellow plastic, but they are still designed with a grip and a trigger much like a pistol.

Now, it's not common for police to grab their gun instead of their Taser "by accident." But there have been a number of incidents in which they claim that's exactly what happened. The most famous example is the case of Oscar Grant, an unarmed 22-year-old lying face down on the ground who was shot in the back and killed by a San Francisco Bay Area transit officer who also claimed that he meant to grab his Taser but grabbed his gun instead. That officer was convicted of involuntary manslaughter and was sentenced to two years in jail. But there are at least 18 other documented incidents, according to Walsh.

We don't know enough of what happened last Sunday to truly understand why Potter, who resigned days later, shot Daunte Wright instead of Tasering him. We'll likely have to wait for her trial to see how she explains it. But I don't think that's the only question that needs to be answered. Why did she feel the need to Taser him in the first place? Indeed, why should a routine traffic stop create such mayhem and over-reaction from the police at all?

I've been writing about Tasers for a long time, even here on Salon back in the aught years. Yes, they are certainly a better choice than using a gun (if the cops can keep their wits about them enough to tell the difference.) But the truth is that Tasers are often deadly weapons in themselves. There have been at least 500 documented deaths by law enforcement's use of Tasers in the U.S. since 2003, according to Amnesty International, 90% of which were perpetrated on unarmed people. Two police officers were charged with murder in Oklahoma last year for killing a man by Tasering him over 50 times.

Generally, these deaths are attributed to "underlying conditions" such as the dubious medical diagnosis of "excited delirium," the unusual condition that mainly afflicts people in police custody. The plain fact is that Tasers are electroshock torture devices designed to force people to comply with the police. When they are used on people with mental health problems, on drugs, or with underlying conditions, they can be debilitating and sometimes deadly, which one would think would cause police to be very cautious about using them on unarmed people at all if they can help it. Just because it doesn't usually break any bones doesn't mean it isn't excessive force. In fact, unless there is no choice other than to actually shoot someone, it is excessive force.

A demand for instant compliance, no questions asked, is at the center of policing in this country and that authoritarian mindset constantly creates confrontations where other methods could be deployed. This incident in which some Atlanta police officers used Tasers on a couple of college kids in their car on the way home from a protest last summer is an example of using an electroshock weapon simply to demonstrate dominance — and it happens all too often.

Daunte Wright was stopped for having expired tags on his car. He cooperated with the police and then moved to get back in the car. He had no weapon and he didn't threaten them. All they knew was that he had an outstanding misdemeanor warrant and an air freshener hanging from the mirror, which is illegal in Minnesota for some reason. There was no reason for the instant escalation, with the officer who was closest to Wright scuffling with him in the front seat and Potter pulling out her gun screaming "I'll tase you!" over this traffic violation. That level of agitation was completely out of line and even if she had shot him with the Taser instead of her gun it would have been excessive force.

The newest idea in police reform is to take cops out of the traffic stop business and put it in the hands of people who have no power to arrest, making these kinds of confrontations much rarer. And some jurisdictions are using mental health workers to respond to calls in which citizens are having episodes that the cops are ill-prepared to deal with and which often devolve into violence unnecessarily. Some common-sense gun safety laws to take lethal weapons off the street would no doubt reduce some of the tension as well.

These are strategies well worth trying to end this cycle of young men driving while Black ending up in the morgue and mentally ill people being tortured with Tasers. But until we deal with this militaristic, authoritarian attitude among the police which demands instant compliance or else, this problem isn't going to go away. Not every interaction has to be a battle of wills with police holding a Taser in one hand and a gun in the other.