"There is no duty, by the way, to deploy a taser" rather than a gun, one Newsmax host suggests 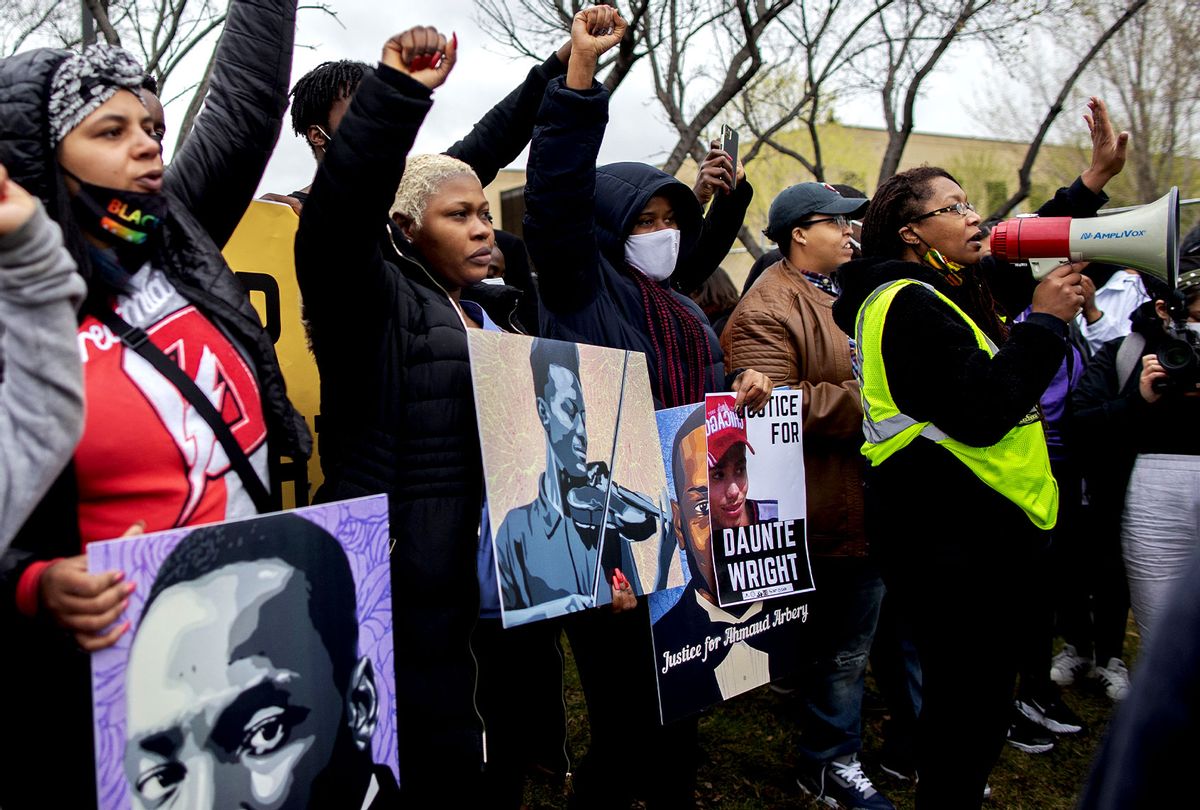 Activist Nola Darling talks on the megaphone in front of the Brooklyn Center police station at a protest over the police killing of Daunte Wright in Brooklyn Center, Minnesota, U.S., on April 13, 2021. (Christopher Mark Juhn/Anadolu Agency via Getty Images)
--

On Sunday, Daunte Wright, a 20-year-old Black man, was pulled over for a traffic stop, apparently because of an expired registration, only to be shot and killed by a police officer who allegedly mistook her firearm for a taser. As the Minneapolis area grieves over Wright's killing, which has sparked volatile demonstrations throughout the small suburb of Brooklyn Center, national right-wing media has taken to the scene to defend the officer who allegedly murdered Wright.

During his Monday night program, Newsmax host Grant Stinchfield proposed that the officer's action in shooting Wright could be "warranted." "Now let me be clear, even though the officer apparently is admitting to making a mistake, an argument could still be made that deadly force was warranted here," Stinchfield stated on his Monday night program. "Fighting officers like you just saw, you could argue, any officer could feel like they were in imminent threat, imminent body harm could come at any moment. There is no duty by the way to deploy a taser, an officer can go to their firearm first, and many do."

Conservative Twitter pundit John Cardillo, currently embroiled in a feud with Roger Stone, attempted to present Wright negatively, which even drew the ire of the right-wing blog RedState, which called Cardillo out over his tweet. "Cardillo, like so many others, wants you to buy into the idea of the scary black man with a gun in order to deflect away from what was more obviously bad policing," RedState blogger Joe Cunningham wrote on Tuesday.

The media's #DaunteWright as opposed to the real Daunte Right. pic.twitter.com/UZrGwTqqzG

Conservative pundit and frequent Newsmax guest Terrence Williams tweeted, "#DaunteWright was charged for illegally carrying a pistol and fleeing a peace officer. He had a history of resisting and doing illegal things. This man did not get pulled over for having air freshener in his car. That's a HOAX."

Fox News contributor Dan Bongino also downplayed the incident, which many have seen as an illustration of the larger problem of police violence against Black Americans, while debating Geraldo Rivera on Monday night. "You have no idea that there's a racial undertone to this at all. And you're saying, 'Oh, Black parents have to worry because …' You have no data to back that up at all!" Bongino claimed. "You're just further inflaming the situation, and the country will burn to the ground because of people like you who say dumb things like that with no evidence to back it up."

Almost EVERYONE is Ignoring, Skipping or "Just not Going There" about the Criminal Daunte Wright, who Resisted Arrested, Ran Away! (Black cop was placing him under arrest btw)—it is BAD that he was shot, should NOT have happened—he should have listened to his MOM. Don't run! pic.twitter.com/Pwj7BqV8c9

Fox News contributor Leo Terrell stated on Twitter, "Race card is played in Brooklyn Center, Minnesota ... Shameful!!!" "Daunte Wright was: An adult, with a warrant, for a gun crime, who resisted arrest. These are empirical facts," right-wing radio host Sebastian Gorka wrote on Instagram while attaching a photo of Wright with what appears to be a gun in his hands. Conservative Twitter personality and former New York Police Commissioner Bernard Kerik tweeted, "#DaunteWright was stopped by a black cop because he had a warrant for robbing a woman at GUNPOINT! He then resisted arrested (sic) in an attempt to escape. #WhiteSupremacy had nothing to do with it."

While some conservative pundits have gone on the defensive about the deadly incident, calling it a mere "accident," others have stayed silent on the issue and focused on the tension between demonstrators and police in Brooklyn Center during the nighttime hours over the past week.

On Thursday, there was even an unlikely change of course for one staunch conservative who called out Wright's killing. Pat Robertson, the right-wing televangelist, broke with the consensus and ripped into policing in America. "The police, why don't they open their eyes to what the public relations are? We've got to stop this stuff," Robertson stated.

When the police are starting to lose the approval of Pat Robertson, you know things are bad. pic.twitter.com/Pu7tw6aoDC