Pterosaurs with thumbs? Scientists say yes, a "monkeydactyl" once existed 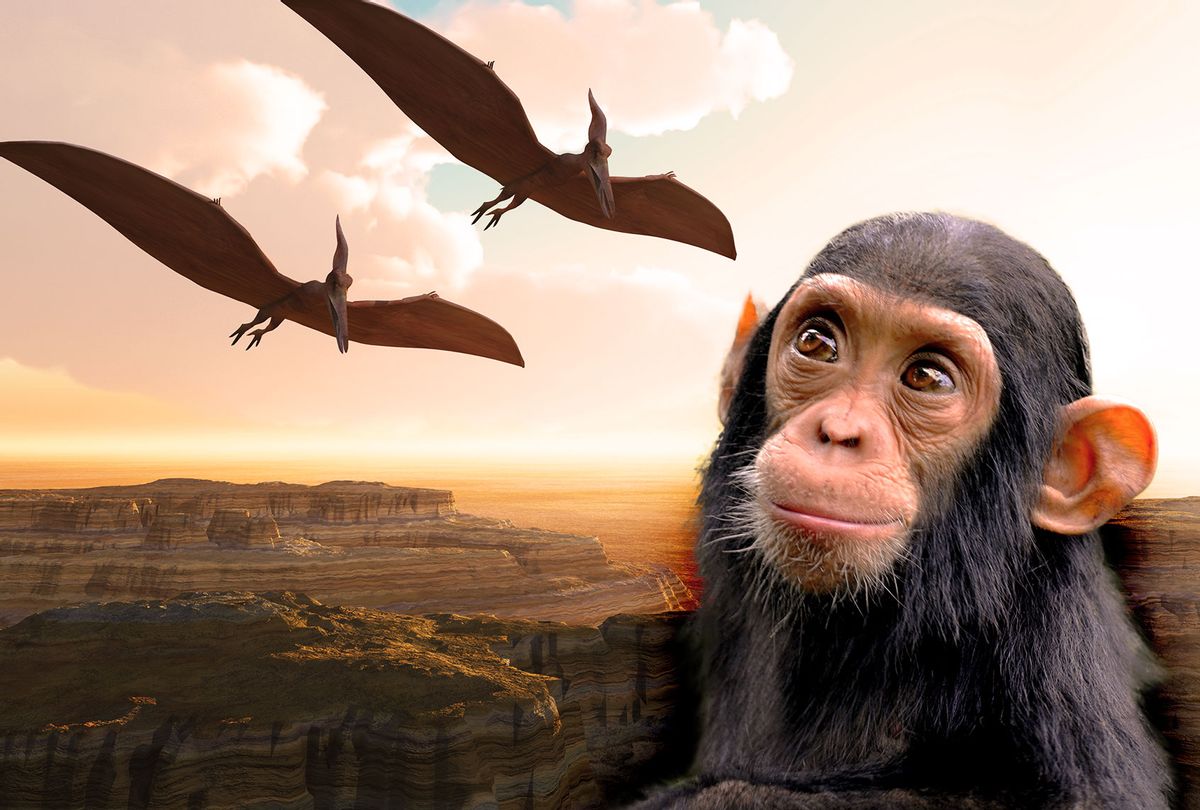 Two Pterosaurs and a chimpanzee (Photo illustration by Salon/Getty Images)
--

If you can, try to imagine a pterodactyl combined with a monkey. It's an absurd image, like Pterri from "Pee-Wee's Playhouse" crossed with King Kong.

Absurd as it might seem, such a thing existed at one point in Earth's history. A new study in the scientific journal "Current Biology" reveals that there once lived a pterosaur — the ancient winged reptile that co-existed with dinosaurs and included the iconic pterodactyl — which had opposable thumbs. The newly-discovered ancient creature has been officially named Kunpengopterus antipollicatus, though it's been informally dubbed "monkeydactyl" by the popular press and on social media.

As the study's authors explain, pterosaurs were the first vertebrates to evolve to be able to performed powered flights. However, the monkeydactyl, which lived in a "unique forest ecosystem" in Jurassic China, also had the oldest known set of palmar (or true) opposable "thumbs." (In this case, their thumb style is known technically as an "opposed pollex.") Indeed, the latter part of the animals' Latin name, "antipollicatus," literally means "opposite thumbed" in ancient Greek.

A true opposed pollex mostly appears in mammals like primates. But as Fion Waisum Ma — a PhD student in Palaeobiology at the University of Birmingham who co-authored the paper — told Salon, opposable thumbs are present in other animals, including "some tree frogs, as well as chameleons, the only living reptiles known for having this feature."

According to Ma, researchers made this discovery by using micro-CT scans that allowed them to see through the rocks and use computers to recreate models of the pterosaur's fossilized limbs. Ma told Salon that the pterosaur they discovered belongs to a group known as Darwinoptera, named after the English biologist Charles Darwin best known for his contributions to evolutionary theory.

"Pterosaurs such as Pterodactylus and Nurhachius are more advanced members, whereas darwinopterans are a transitional group of pterosaurs, having both primitive and derived features," Ma explained.

Salon also spoke by email with paleontologist Rodrigo Pêgas of Brazil's Federal University of ABC–São Bernardo, who was another co-author of the paper.

Pêgas said that the discovery was "significant" in that they were to show for the first time that some pterosaurs were arboreal, meaning they lived and roosted in trees. The new species is an example of an arboreal pterosaur. "The opposed thumb is likely to have been an adaptation for that," Pêgas told Salon. "This means that treetops were also occupied by pterosaurs during the Jurassic, along with mammals and some small dinosaurs, before birds even appeared."

Pêgas noted that the pterosaur's opposable thumbs  have implications for our understanding of evolution.

"The discovery is interesting because it represents the oldest case of an opposed thumb," Pêgas explained. "It shows that vertebrate life evolved opposed thumbs in a Jurassic forest, in China, through a small pterosaur." Pêgas noted that opposable thumbs are "extremely rare outside of mammals." Indeed, paleontologists are unaware of any other prehistoric animal from the same geologic epoch that had completely opposable thumbs.

Pterosaurs are having a moment in April 2021. A recent article published in the journal iScience argues that the azhdarchid pterosaur — which, in contrast to the diminutive Monkeydactyl, is believed to have been the largest flying animal of all time — had a unique skeletal structure in its neck that allowed it to devour large prey without injuring itself.

"There's between seven and nine cervical vertebrae, and that's neck vertebrae. Inside each vertebra, it basically looks like a tube within a tube that's connected by very thin bones," Cariad Williams — a Ph.D. student at the University of Illinois at Urbana-Champaign who co-authored the paper — told Salon. She compared the structure to the spokes on a bicycle wheel.