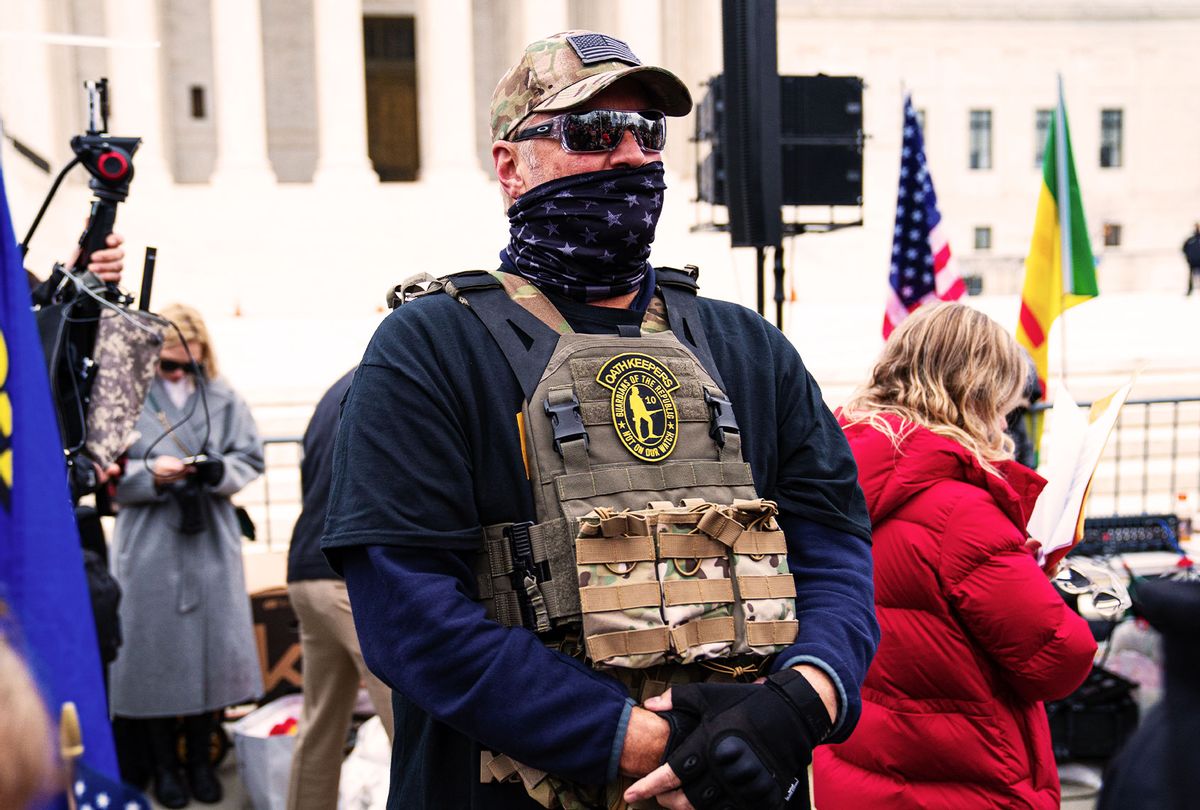 A member of the right-wing group Oath Keepers stands guard during a rally in front of the U.S. Supreme Court Building on January 5, 2021 in Washington, DC. Today's rally kicks off two days of pro-Trump events fueled by President Trump's continued claims of election fraud and a last-ditch effort to overturn the results before Congress finalizes them on January 6. (Robert Nickelsberg/Getty Images)
--

A segment on CBS News' "60 Minutes" segment about the Oath Keepers, which aired on Sunday evening, has attracted considerable pushback on Twitter and elsewhere from viewers who criticized its reporting on the far-right militia group's role in the Jan. 6 attack on the U.S. Capitol.

The exposé from "60 Minutes" correspondent Sharyn Alfonsi highlighted the Oath Keepers' role in organizing the Jan. 6 riot while also highlighting the apparent split between the largest chapter of the Oath Keepers and the group's founder, Stewart Rhodes, who launched the organization in March of 2009.

Within the segment, one Oath Keepers member in Arizona, Jim Arroyo, told Alfonsi that the group works closely with law enforcement, since many of the paramilitary organization members are former police officers or ex-military personnel. "Our guys are very experienced. We have active-duty law enforcement in our organization that are helping to train us. We can blend in with our law enforcement, and in fact, in a lot of cases, our training is much more advanced because of our military backgrounds." Arroyo declared during the segment.

According to FBI counterterrorism official Javed Ali, that claim made by Arroyo at least partly holds true: The Oath Keepers have a "large percentage" of members who "have tactical training and operational experience in either the military or law enforcement," he said. "That at least gives them a capability that a lot of other people in this far-right space don't have," Ali added.

"Our guys are very experienced. We have active-duty law enforcement in our organization that are helping to train us. We can blend in with our law enforcement," says a member of the Oath Keepers, a far-right militia group. https://t.co/7fOee4i1gd pic.twitter.com/JT2sGCMOIL

Arroyo, the Arizona Oath Keepers leader, later in the interview attempted to distance himself from Rhodes, the founder of the group, who on Jan. 6 was spotted on the Capitol steps and was later found to have helped members of his militia group plot the siege.

Photos and phone records place Stewart Rhodes, the founder of the far-right militia group the Oath Keepers, on the Capitol steps on January 6, but no charges have been brought against him. Rhodes declined to speak with 60 Minutes. https://t.co/6Sblb6l44F pic.twitter.com/rLcYRCKFZl

"I want to congratulate Stewart Rhodes and his 10 militia buddies for winning first place in the ultimate dumbass contest, because that's what it was," Arroyo said. "That goes against everything we have ever taught, everything we believe in. It was pre-planned; it was pre-staged. Ten guys go and do something stupid, and suddenly we're the devil."

Many on Twitter perceived the segment as allowing Arroyo and other members of the Oath Keepers to divert blame and minimize their role in the events of Jan. 6.

"This is the same group being dismantled at the moment for their role in 1/6, but sure, give them a massive platform and free media. Real fricking brilliant," national security lawyer Bradley P. Moss, a partner at the law firm Mark S. Zaid, PC, wrote on Twitter. Former Yahoo News White House reporter Hunter Walker tweeted, "Not sure why the Oath Keepers are being given air time to downplay their role on 1/6."

Mass media will give a large platform to white supremacists who are telling everyone of their collaboration with law enforcement but we can't allow any platform for discussion of defunding & abolishing police. https://t.co/3Zh5gOKgtY

Sophia Nelson, a contributing editor at the Grio, responded to the segment on Twitter writing, "Shame on CBS for giving this monster a platform and voice."