A cosmologist throws light on a universe of bias

In “The Disordered Cosmos,” Chanda Prescod-Weinstein contemplates the exclusionary culture of physics. 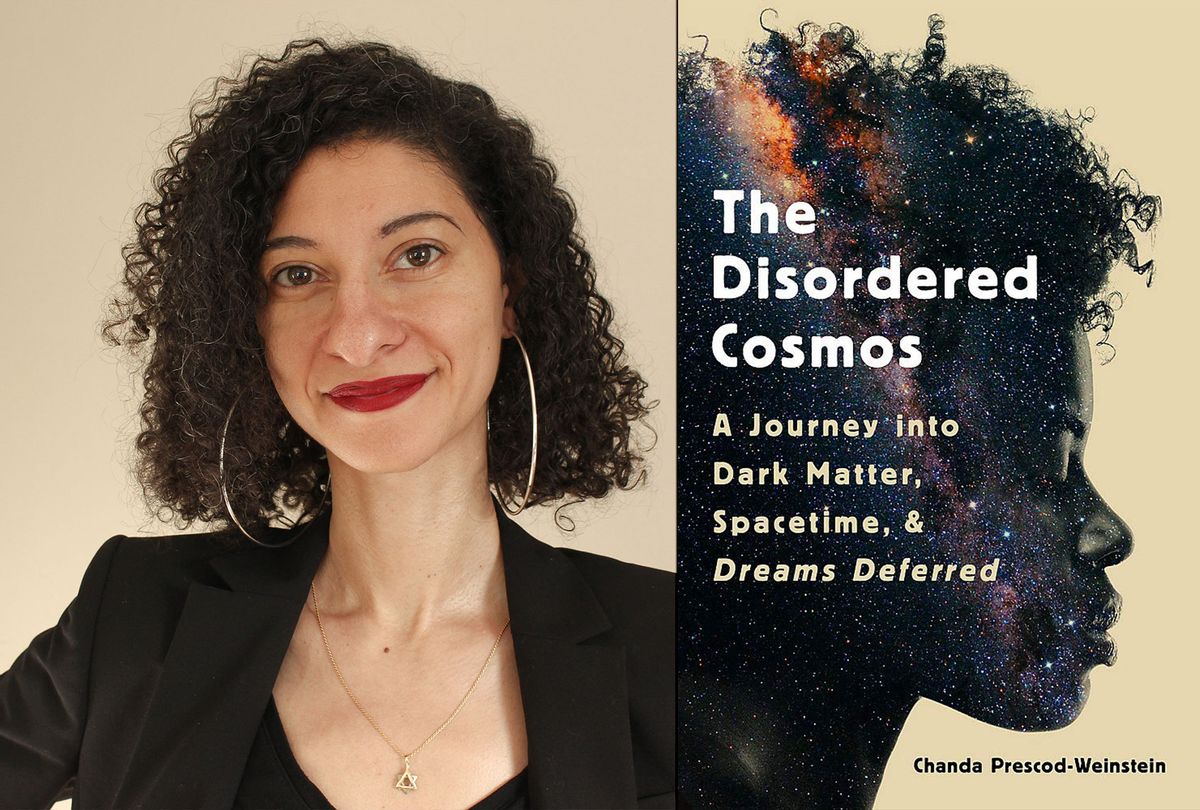 Chanda Prescod-Weinstein is a cosmologist who is adept with both equations and "the keeper of a deeply human impulse" to understand our universe. In her first book, "The Disordered Cosmos: A Journey into Dark Matter, Spacetime, & Dreams Deferred⁠," Prescod-Weinstein also admits she is a griot, one who knows the music of the cosmos but sings of earthbound concerns. She is an award-winning physicist,⁠ feminist, and activist who is not only, as she says, the first Jewish "queer agender Black woman⁠" to become a theoretical cosmologist, she is the first Black woman ever to earn a Ph.D. in the subject.⁠

Prescod-Weinstein is an assistant professor of physics and astronomy, and a core faculty member in the department of women's and gender studies at the University of New Hampshire. She thus enjoys a unique frame of reference from which to appraise science and her fellow scientists. She is an insider whom others nonetheless cast as an outsider, because of her identity, orientation, and the tint of her skin. From the outside, however, she admits a fuller view of her field. She perceives the "structures that were invisible to people,"⁠ and reveals them.

"The Disordered Cosmos" is equal parts critical analysis, personal essay, and popular science. It is an introspective yet revelatory book about the culture of physics and the formative years of a scientific career.

Growing up during the 1990s in East Los Angeles,⁠ where at night the dominant lights flashed red and blue, Prescod-Weinstein owned a telescope but rarely saw the stars.⁠ She was a "born empiricist"⁠ who decided to become a physicist at the age of 10, after her single mother took her to see the documentary "A Brief History of Time."⁠ Her mother, the journalist and wage activist Margaret Prescod, continually nourished the young girl's passion. She took a teenage Prescod-Weinstein to Joshua Tree National Park, where they spent a night observing the Comet Hyakutake⁠, unblinded by city lights.

After arriving at Harvard University to study physics, Prescod-Weinstein struggled academically, in part because of her own extracurricular advocacy for providing a living wage to campus workers. Yet a classmate tried to help her realize her childhood dream. He offered her a job at a new observatory atop Maunakea⁠ in Hawaii, where the view to the heavens was among the most limpid on Earth. There she could earn better than a living wage in the astronomers' efforts "to gather photons — particles of light — that will help them tell our cosmological story."

Prescod-Weinstein imagined dedicating herself to pure physics in this idyllic locale⁠, with "beaches, amazing tans, and an opportunity to start over." But no physics is pure, no place such an idyll. Astronomers had started building their telescopes on Maunakea during the 1960s against the protests of native Hawaiians, for whom the summit is sacred. Her living wages, she realized, would have underwritten the erasure of another peoples' cosmology. "I promised myself that I would make more room in my life for my dreams of being a physicist," she wrote. "But not like this." She now supports the native Hawaiians who have vowed to protect their unceded lands against the impending construction of the Thirty Meter Telescope, which might yet become the world's largest.⁠

Prescod-Weinstein not only narrates her struggle to become a cosmologist, she advocates for all peoples whom physicists have undervalued. She praises the assistants and janitors, mostly people of color, whose labor permits theorists to ponder the universe daily, because "part of science is emptying the garbage."⁠ She elevates her elders, such as Elmer Imes and Ibn Sahl, whose contributions others have disregarded because these forebears were not of European descent.

The beauty of mathematics and the majesty of the stars attracted Prescod-Weinstein to cosmology. They sustain her.⁠ Yet, she writes: "Learning about the mathematics of the universe could never be an escape from the earthly phenomena of racism and sexism."⁠

So, Prescod-Weinstein unveils the majesty that oppression obscures. In the opening quarter of her book, she hurries readers through a tour of physics, rushing past Bose-Einstein condensates,⁠ axions,⁠ and inflatons⁠ to arrive at her own research into dark matter. It's a brilliant sprint, and the prize for finishers is some of her finest writing about race and science.

Prescod-Weinstein includes a thunderous essay about scientists' historical neglect of the biophysics of melanin and the repercussions today.⁠ Later, there is a chapter that she did not want to write about an episode from her life that she did not want to share⁠. She had no choice, she explained, because "Rape is part of science and a book that tells the truth about science would be a lie if I were to leave out this chapter."⁠ Her account is so fierce and switches registers so regularly, as if gliding between chorus and verse, that the writing becomes incantatory. She saps the event's power to define her, transmuting pain into affecting prose.

Prescod-Weinstein is attuned to the language of physicists, especially the biases it elides, as when her colleagues speak of "colored physics," more commonly known as quantum chromodynamics, which she describes as "a theory that uses color as an analogy for physical properties that have nothing to do with color." She is adept at then rephrasing physics to redress those biases. Systemic racism is compared to weak gravitational lensing, the subtle distortion of light owing to the curvature space and time around distant galaxies.⁠ Cyclical time is intuitive to a person who menstruates.⁠ The wave-particle duality reveals the queer, nonbinary nature of quantum mechanics.⁠ Dark matter is not actually dark: "It's transparent — more like a piece of glass than a chalkboard."⁠ Not only is the name antithetical to the science, some physicists have compared such invisible matter, crudely, to Black people.

"Studying the physical world requires confronting the social world⁠," Prescod-Weinstein writes. "It means changing institutionalized science, so that our presence is natural and our cultures are respected."⁠ It also means confronting the privileged stories of science.

The demographics of physicists still reflect the iniquities of the past. And physics remains diminished because of its biases. Whenever we exclude whole peoples, we not only disallow their questions we disavow their knowledge. The field squanders other cultures' perceptions of time. And as Prescod-Weinstein notes, physicists may even misinterpret the wave-particle duality and confuse the rotating identities of neutrinos because they are too oriented toward binaries.

"The Disordered Cosmos" is not perfect. There are phrases that Prescod-Weinstein might have heated longer or squeezed harder until they crystalized. There are intervals when the pressure of having to cite so many ideas make matters too dense. But these are quibbles. Besides, the defects of an otherwise ideal crystal can render it more colorful and electric.

Prescod-Weinstein aspires to loftier matters. The book's frontispiece is a sketch of two women who remind her that "even in the worst conditions, Black women have looked up at the night sky and wondered."⁠ These women were slaves, who not only navigated the stars to freedom but also wondered at that black expanse. They are "as much my intellectual ancestors as Isaac Newton is."

Prescod-Weinstein's most vital work, in the end, is the emancipation of Black and brown children who still cannot see their futures in the stars. She distills this labor in a series of questions: "What are the conditions we need so that a 13-year-old Black kid and their single mom can go look at a dark night sky, away from artificial lights, and know what they are seeing? What health care structures, what food and housing security are needed?"⁠

Prescod-Weinstein teaches that all humans are made of luminous matter. And she knows just how radiant people can be, despite the obstacles in their way. She understands, intimately, that "Black people hunger for a connection to scientific thought and will overcome the barriers placed in front of them in order to learn more."

Joshua Roebke is finishing a book on the social and cultural history of particle physics, titled "The Invisible World." He won a Whiting Foundation Creative Nonfiction Grant and teaches literature and writing at the University of Texas at Austin.