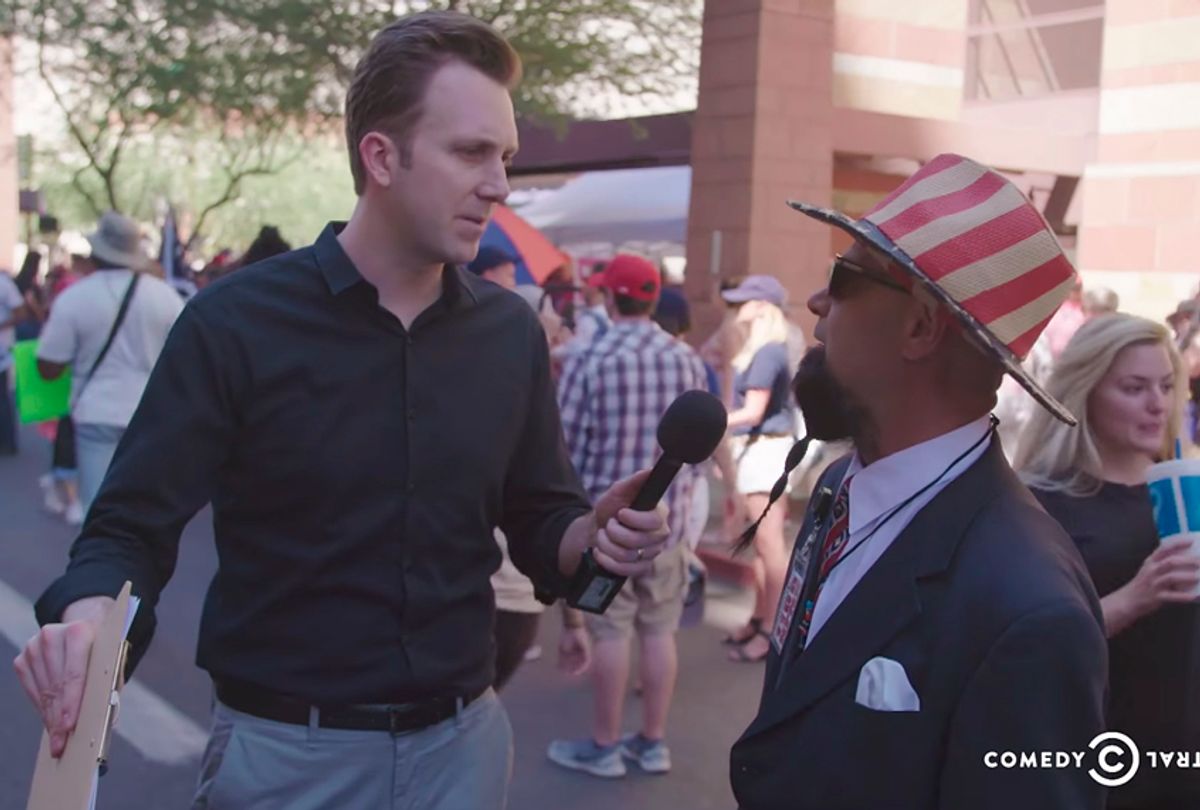 Jordan Klepper from the "Daily Show" has embarked on a years-long mission to understand the MAGA world of Donald Trump's most fervent supporters. In a new 35-minute segment, Klepper takes viewers deep into the trenches of the MAGAverse and uncovers the MAGA psyche that led to the Jan. 6 insurrection. Klepper has described himself on the day of the Capitol insurrection as someone who "just wanted to find some laughs," but found himself in the midst of a rage-filled rally that quickly turned south.

Klepper interviewed a man who described Donald Trump as "our first rock star, superhero president." Another woman, wearing a confederate flag shirt, said, "he's just a peaceful person in general, I think." Many of the supporters admit that he's "rough around the edges," they "don't like how he talks," and "yeah, he's an ass sometimes." But that's all part of his allure, they argued.

Klepper noted that there isn't much that could deter a Trump rally: not bad weather, an impeachment trial, or even a global pandemic called COVID-19. In regards to masks, some said "we're lions not sheep," therefore they won't follow the mask mandate that they argue infringes on their rights.

Some of the conversations went as follows:

"Read the transcript," a MAGA supporter said of the impeachment trial.

"Did you read the transcript?" asked Klepper.

"But it's important that everyone read the transcript?"

"But to be clear, you have not read the transcript," Klepper pressed.

"But to be clear, you haven't read it, you just trusted someone else to have read it," Klepper confirms.

Klepper reinforced that Donald Trump is a brand above anything else, with his face found on flags, shirts, pants, and hats, and his name printed on hot pink, black, red, blue, and tie dye articles of clothing.

The segment concludes with an interview with Edward Young, a fervent Trump supporter who went to more than 50 Trump rallies over the past four years. Young, sporting new fang implants on his canine teeth and a Barron 2052 pin, talked about the comradery and community he found with the MAGAverse, fondly reminiscing on the fun they had.

Klepper interjected that the last Trump rally, the insurrection, was not exactly a lot of fun. Young argued that he had heard reports that one of the rioters who broke into the capitol was an integral member of Antifa. "Some of them are being unfairly persecuted," said Young of the rioters, after Klepper mentioned they tried to kill Nancy Pelosi.

In conclusion, Klepper and Young find a solitary shred of common ground. Young argued that Trump is their William Wallace, and Klepper countered that he wouldn't give him Wallace, but "he's a lot like Mel Gibson." Young couldn't help but agree.