White people can be collateral victims of white supremacy, as this notorious 1936 case over an inheritance shows 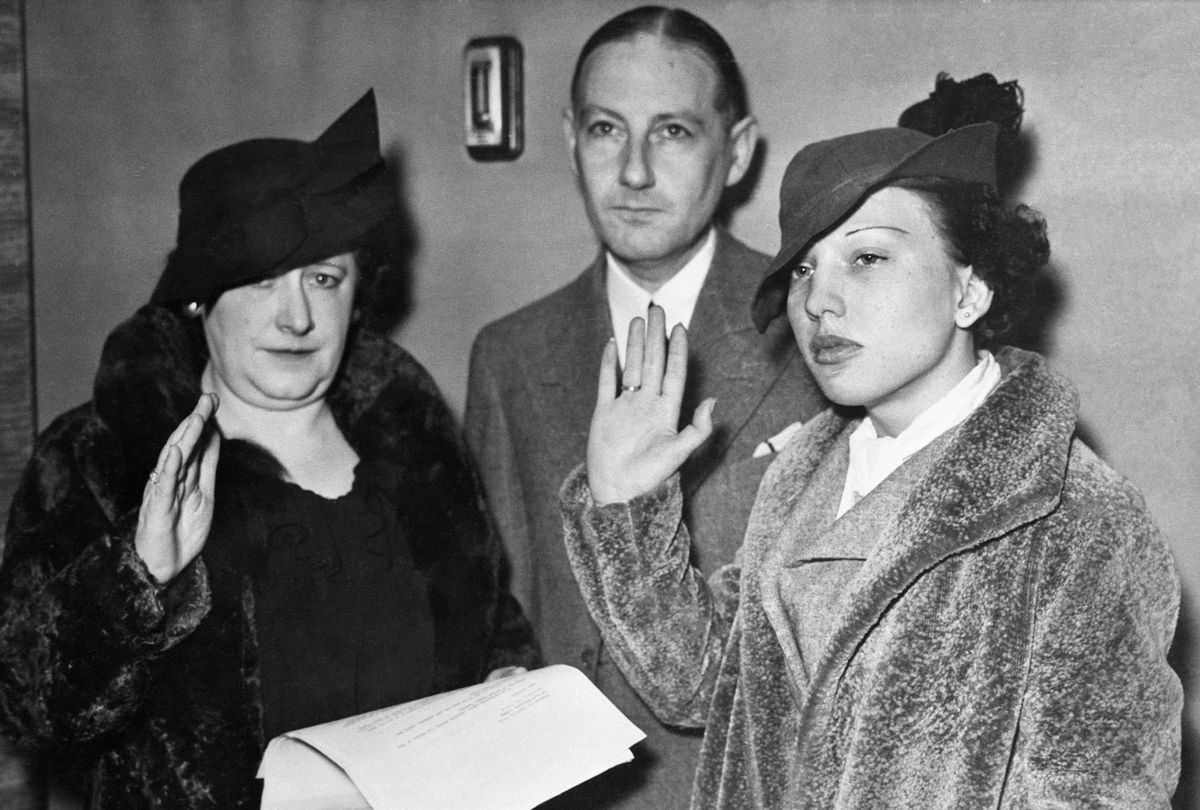 Preparatory to their filing a $500,000 damage suit against the girl's mother, Mrs. Maryon Hewitt McCarter, two California physicians, and a psychiatrist, Miss Ann Cooper Hewitt, (right), and her attorney, Russel P. Tyler, are shown making final depositions. The charges claimed her mother and the doctors conspired to perform an operation rendering her sterile. (Bettmann Archive/Getty Images)
--

In January 1936, San Francisco heiress Ann Cooper Hewitt  shocked the nation when she claimed that, in order to deprive her of her inheritance, her mother, Maryon, had her declared "feebleminded" and then sterilized without her knowledge. Ann explained that her father, legendary inventor Peter Cooper Hewitt, had bequeathed two-thirds of his $4 million dollar estate to her and one-third to her mother, but his will provided that her share went to Maryon if she died childless. Knowing this, and presuming she would outlive her daughter, who had bronchial trouble, Maryon had taken steps to see that Ann never became a mother. A mere months before Ann's 21st birthday, she conspired with two doctors to have Ann's fallopian tubes removed during a scheduled appendectomy.

In addition to suing her mother for half a million dollars, Ann demanded a full accounting of her mother's spending. She claimed Maryon had squandered much of her trust fund at gambling resorts across the world.

For the next six months, the two women riveted the public with their claims against each other. It wasn't merely the salacious nature of the feud that raised eyebrows, but also the unusualness of Ann's case. The heiress hardly resembled the typical victim of eugenics; she was educated, wealthy and white. This raised the question: Could any woman deemed "sexually deviant" be plucked off the street and operated upon?

She could, for the simple reason that she threatened to amalgamate the races. As Ann's mother and the doctors' attorneys managed to persuade the public, "adrift" women constituted a grave danger to white society, which only surgery could ameliorate.

Long after Ann's death and the eventual repeal of sterilization laws, the heiress's story and that of eugenics, more broadly, remain instructive. Together, they reveal how narrowly whiteness is conceived and how readily the very institution that confers a person's privilege can become her undoing. They reveal a truth that scholars and activists are only now beginning to make mainstream: White people can be collateral victims of white supremacy.

Eugenics was a movement to protect the purity of the white race. It took hold in America precisely at a moment when the nation's racial makeup was transforming. In the early 20th century, Eastern Europeans were emigrating in record numbers, and African Americans were migrating from the rural South to the industrial North. In order to protect the white race from "undesirables," eugenicists were determined, among other measures, to eliminate the "waste humanity" from their own ranks. Conflating mental, moral and physical defects, they targeted poor, disabled, substance-dependent and sexually transgressive white people perceived to threaten the vitality of the gene pool, either by virtue of their heritable traits or their seeming likelihood to cross the color line.

Ann's mother exploited these realities, making much of Ann's flirting with an African American train porter. In telling of Ann's preference for "the help," she also stoked fears of low-class men bringing out women's baser instincts. According to psychologists at the time, it was household workers who tended to introduce perversion into respectable homes, corrupting wellborn individuals like Ann.

Intuiting the racial dynamics at play, Ann re-asserted her whiteness and cast her mother as the real threat. She had experts attest to her fluency in French and Italian, as well as her high-brow literary tastes. One physician noted that she read books on Shakespeare, Napoleon Bonaparte, and Marie Antoinette, in addition to Charles Dickens' works. If Ann had any defects, her defense claimed, they were due to her having been neglected by a mother who led a riotous life; it was Maryon who drank herself stupid and threw herself at workingmen.

Ann's advocates never questioned the ethics of sterilization, either in the civil case or the criminal one, in which the two doctors stood trial in August, while Maryon remained on the East Coast convalescing from a suicide attempt. Focused on establishing the unlawfulness of Ann's surgery, these witnesses simply tried to prove her undeserving of sterilization.

It was no use. The judge dismissed the case against the doctors, finding that they and Ann's mother had acted lawfully. The public seemed to accept this outcome. There were no protests or riots; and for the rest of her life, the heiress was lambasted by the press.

The case faded into obscurity, but not before helping eugenicists to rebrand their movement in ways that would enable involuntary sterilization practices to endure well into the 20th century. As Wendy Kline first recounted in her book, "Building a Better Race: Gender, Sexuality, and Eugenics from the Turn of the Century to the Baby Boom," the case abetted eugenicists to shift focus from heredity to environment exactly at a moment when scientists were exposing the flaws of eugenicists' claims about inheritance. It also authorized the use of sterilization in private practice. These changes paved the way for thousands of individuals — the majority of color — to be operated upon without consent. In California, the heiress' tragedy would reverberate in the many instances of Mexican Americans sterilized on the grounds that they were "hyper-breeders" whose children would inevitably drain public resources.

Yet, for all its impact on people of color, the case also reminds us of the great tragedies endured by white people thought to imperil the racial hierarchy. Still today, poor, disabled, transgender and norm-breaking whites face an increased risk of state violence, including police brutality and forced sterilization. Many in white evangelical circles report trauma from the rituals of "purity culture," whose racial animus is documented in a slew of recent books.

Scholar-activists like Jonathan M. Metzl and Heather McGhee have also called attention to the harms whites experience as a result of the dismantling of public programs, brought on by a "politics of racial resentment." Their respective bestsellers, "Dying of Whiteness: How the Politics of Racial Resentment Is Killing America's Heartland" and "The Sum of Us: What Racism Costs Everyone and How We Can Prosper Together," contend that whites greatly suffer from a culture that casts government dependents as menaces to society. As in the early 20th century, when eugenics first flourished, the pervasive contempt for such dependents cannot be disentangled from fears of non-whites gaining dominance. Yet, far from rooting out racism, many marginalized whites fall for the myth that dark-skinned people are to blame for their woes, supporting the very austerity measures responsible for growing poverty.

Before her death from cancer at 41, Ann fell into similar patterns of thinking. She often appealed to her wealth and lineage to disparage other women, including one whose husband she stole. She never seemed to realize how such classism had contributed to her tragedy.

But she did show great compassion to at least one outcast woman: her mother. When Maryon died in 1939, never having fully recovered from suicide attempt, Ann travelled east to mourn her. Perhaps, having been excoriated for her the same crime (maternal unfitness), she recognized her parent for the hurting woman she'd become. At Maryon's graveside, she may have fleetingly realized what Metzl, McGhee, and others have: Our well-being is intimately bound up with others' and no one will be truly free until all are.

Audrey Clare Farley is the author of "The Unfit Heiress: The Tragic Life and Scandalous Sterilization of Ann Cooper Hewitt." She is also a writer, book reviewer, and historian of twentieth-century American fiction and culture. Having earned a PhD in English from University of Maryland, College Park in 2017, she occasionally lectures in history and literature at local universities. Her essay on Ann Cooper Hewitt, published in July 2019 in Narratively, was the publication's second most-read story of the year. Her writing on the eugenics movement and other topics has appeared in The Atlantic, The Washington Post, The New Republic, Public Books, Lady Science, Longreads, and Marginalia Review of Books, where she is a contributing editor. She lives in Hanover, Pennsylvania.